Japan will review progress toward its 2030 target for reducing greenhouse gas emissions with an eye on achieving its more ambitious goal of becoming carbon neutral by 2050, Prime Minister Yoshihide Suga said Sunday at an online meeting with leaders for the fifth anniversary of the Paris climate agreement.

At the Climate Ambition Summit, co-chaired by the United Nations, Britain and France, Suga said Japan will this year provide roughly $11.8 billion in public and private climate finance to support global decarbonization and contribute up to $3 billion to the Green Climate Fund for helping developing countries reduce their greenhouse gas emissions. Britain will host the 26th Conference of the Parties on climate change in November 2021. 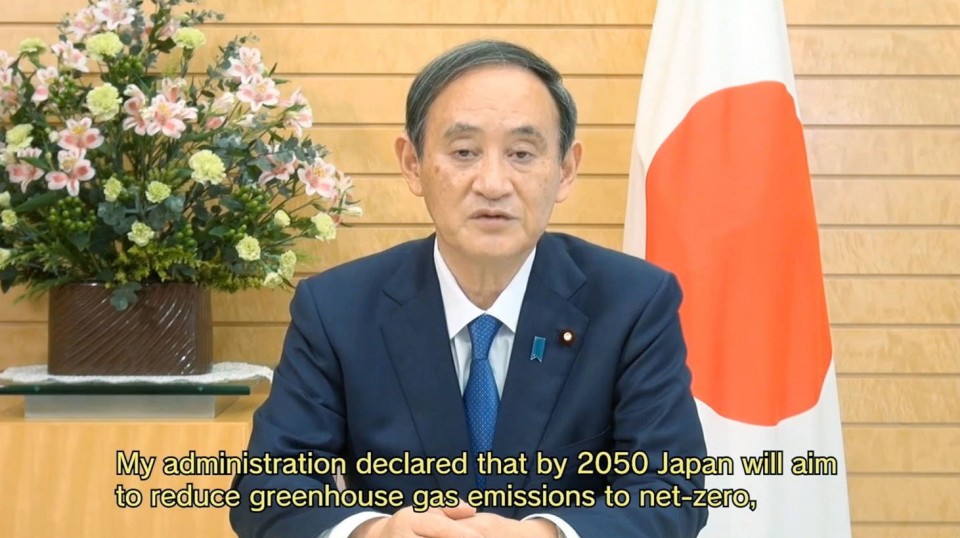 Pre-recorded video of Prime Minister Yoshihide Suga played at an online meeting with world leaders for the fifth anniversary of the Paris climate agreement on Dec. 13, 2020. (Photo courtesy of United Nations)(Kyodo)

"Regarding Japan's efforts toward 2030, we will proceed with discussions based on our new target, and we aim to submit them to the United Nations by COP26," said Suga in a prerecorded video message.

"Japan is determined to lead the efforts to realize the decarbonized world that the Paris Agreement aims for, in cooperation with other countries," he said.

In his policy speech in October, Suga vowed to make Japan go carbon neutral by 2050, taking a step forward from the government's previous target of reducing emissions by 80 percent by 2050.

The announcement has led to growing calls for raising the fiscal 2030 emissions-cut target in order to meet the longer-term goal, which is on a par with pledges by other economies including the European Union and Britain.

Under the 2015 Paris Agreement on climate change, Japan aims to slash greenhouse gas emissions by 26 percent in fiscal 2030 compared with fiscal 2013.

But it also said Japan cannot achieve its longer-term goal of cutting emissions to zero on a net basis by 2050 "unless all sorts of measures are taken."

Suga has pledged to establish a fund of 2 trillion yen ($19.2 billion) for firms developing green technologies as part of efforts to achieve carbon neutrality by 2050 and spur economic growth.

He has also called for utilizing next-generation solar cells, carbon recycling and hydrogen to realize the goal, saying addressing climate change is no longer a constraint on economic growth.