Japan sought "quiet" talks with U.S. on defense cost-sharing in 1989

The Japanese government sought to avoid talks on U.S. calls to pay more for hosting American troops during a 1989 summit, worried that it would draw criticism from the Japanese public, according to diplomatic records declassified on Wednesday.

The records regarding the summit between Prime Minister Toshiki Kaifu and President George H.W. Bush show Foreign Ministry officials repeatedly stressed to U.S. counterparts the need to continue "quiet dialogue" to ensure the cost-sharing negotiations did not fall through amid the U.S. Congress' calls for a heavier burden for Japan.

The two countries ultimately came to terms on the so-called host nation support, but the outbreak of the Gulf War in 1990 would put Tokyo under renewed pressure to make a larger contribution to their bilateral alliance.

According to a dispatch sent from the Japanese Embassy in Washington on Aug. 30, 1989, officials from the two countries met that day to discuss talking points for the summit, slated to take place two days later in the U.S capital.

A senior U.S. official attached to the National Security Council suggested the leaders agree to continue discussions on the cost-sharing agreement at the ministerial level, adding that not touching on the issue at all during the summit was "not an option," according to the records, which are marked "top secret." 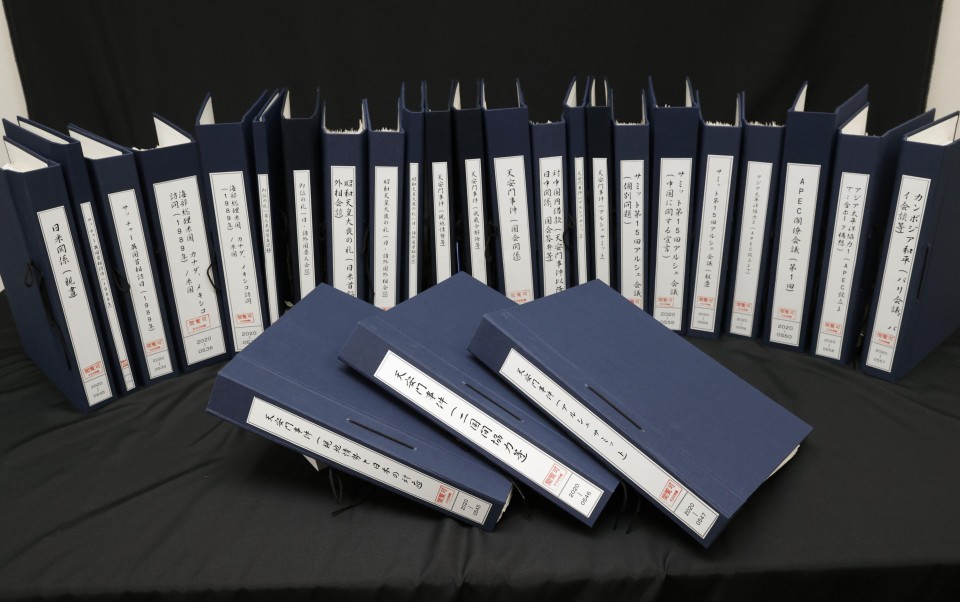 But Tatsuo Arima, head of the Foreign Ministry's North American Affairs Bureau, argued that elevating negotiations that had been taking place at the working level to the ministerial level would "give the strong impression that Japan will be (or is being) pressured" to significantly increase its share of the burden of hosting American troops.

"The current administration would face a crisis and the continued contributions by Japan in this area could be put at risk," the records quoted Arima as saying. He pushed for the allies to continue "quiet dialogue" and resolve their differences behind closed doors.

In a meeting hours before the summit, Secretary of State James Baker told Foreign Minister Taro Nakayama that calls were growing in Congress to have Japan make a bigger contribution to the alliance, stressing the need for "creative responsibility sharing."

Bush said during the summit that Washington understood that host nation support was a sensitive matter for Tokyo without pushing the issue, according to the records.

Takashi Shinobu, a professor at Nihon University specializing in the history of Japan-U.S. relations, said the United States likely wanted to "avoid driving Kaifu, who had taken office less than a month earlier, into a corner."

After Iraq's invasion of neighboring Kuwait led a U.S.-led coalition to launch the Gulf War in August 1990, Tokyo once again came under pressure to contribute more, this time by deploying the Self-Defense Forces.

Unable to do so under its war-renouncing Constitution, however, Japan drew U.S. ire, with Vice President Dan Quayle telling Kaifu during a visit to visit to Tokyo that the absence of Japanese troops in the Middle East was "noted."

Japan would end up spending $13 billion to support the coalition to make up for not putting boots on the ground.

Kaifu's trip to Washington came amid heightened tensions over the U.S. trade deficit with Japan, which had emerged as an economic powerhouse after rebuilding from its defeat in World War II.

The episode has many parallels with the current state of Japan-U.S. relations, Shinobu said, with negotiations for a fresh cost-sharing agreement -- the deal must be renewed every five years -- having started in October.

Roughly 55,000 U.S. military personnel are currently stationed in Japan under a 1960 security treaty. The cost-sharing agreement covers utility and labor costs for U.S. bases as well as outlays for relocating training exercises away from populated areas.

Japan opposed sanctions against China on day of Tiananmen crackdown