The latest edition of the Michelin guide of starred eateries in Tokyo was unveiled on Monday, with the publishing company saying it hopes announcing the list will support restaurants and the tourism industry struggling amid the novel coronavirus pandemic. 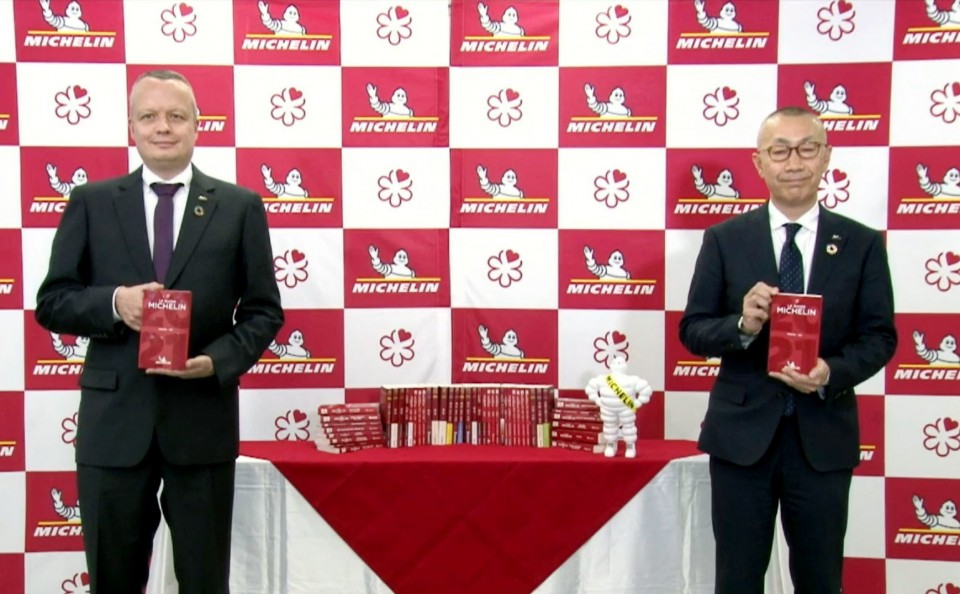 Screenshot image taken Dec. 7, 2020, shows copies of the 2021 edition of the Michelin guide of starred eateries in Tokyo, which was unveiled at an online press conference. (Kyodo) ==Kyodo

The Michelin Guide Tokyo 2021, unveiled by Nihon Michelin Tire Co. and to go on sale on Thursday, includes 446 eateries, of which 12 were ranked the highest with three stars. It also awarded Green Stars to establishments making efforts toward sustainability.

"We faced questions whether we could publish the guidebook this year. But we published it because we wanted to do so. The underlying reason was to support restaurants and the future of the industry," Paul Perriniaux, the managing and representative director, told an online press conference.

Of the three-star eateries, French restaurant L'Effervescence and Chinese restaurant Sazenka, both in Minato Ward, newly gained the top status. Three establishments have been on the list for 14 straight editions.

To compile the guide, Michelin employees dine at restaurants without revealing that they are inspectors. According to the company, it was forced to make changes to its inspection plan due to the pandemic, but finished it in time for the publication of the guide.

Michelin published the Tokyo guide for the first time in 2007. This year, it awarded two stars to 42 eateries and one star to 158 restaurants.