Relations between Japan and South Korea in 2021 are expected to remain at a historic low over a wartime labor issue, even though the U.S. administration under President-elect Joe Biden is set to increase pressure on the two American allies to mend ties.

Political analysts say Biden may look to play a behind-the-scenes mediator role, just as the government of President Barack Obama did in 2015 to help settle the issue of Korean "comfort women" who worked in wartime Japanese military brothels, a major sticking point between the Asian neighbors.

Biden served as vice president under the Obama administration.

In response to U.S. pressure, Japan and South Korea may be compelled to give the impression they are trying to mend ties. But their differences over wartime labor compensation remain deep and the two countries are unlikely to fundamentally resolve the issue, they said.

"I believe the Biden administration will push more for strengthening the alliance between its allies and the question is by how much it wants an improvement in the Japan-South Korea relationship," a senior Japanese diplomat said.

But ahead of assuming office on Jan. 20, Biden has said he intends to focus on strengthening alliances to tackle global challenges such as China's rise. 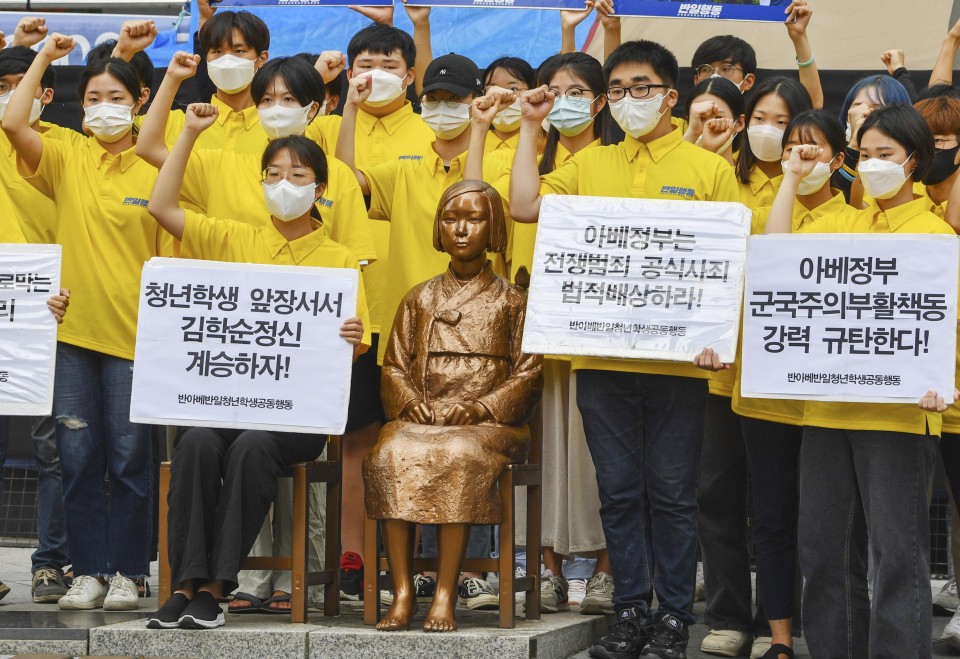 Demonstrators gather around a statue in front of the Japanese Embassy in Seoul on Aug. 14, 2020, of a seated girl symbolizing "comfort women," who were forced to work at Japanese wartime military brothels. South Korea marked its official memorial day for those women the same day. (Kyodo) ==Kyodo

On the campaign trail, he blamed Trump's foreign policy for having Japan and South Korea "at odds," and his nominee for U.S. Secretary of State, Antony Blinken, seems well qualified for the job at hand.

Blinken played a major role in deepening the trilateral relationship between the United States, South Korea and Japan during his stint as deputy secretary of state under the Obama administration.

"Ahead of the inauguration of the Biden administration, South Korea is already making moves so that the United States will not think that Seoul is to blame for deteriorating ties with Japan," said Kan Kimura, professor at Kobe University's Graduate School of International Cooperation Studies.

He was referring to a number of overtures by South Korea, including recent visits to Japan by Park Jie Won, director of the National Intelligence Service, and Kim Jin Pyo, a heavyweight member of the ruling Democratic Party who heads a cross-party parliamentary group to promote ties with Tokyo.

"It is not that South Korea puts emphasis on improving ties with Japan. Its focus is to be on good terms with the United States to cooperate in advancing talks with North Korea," Kimura said.

"North Korea has always been the top priority for (South Korean President) Moon Jae In and Seoul's relationship with Japan or the United States is simply a means" of promoting dialogue with the North, he said.

Japanese diplomats have made it clear that under no circumstances will Tokyo budge in its stance over the current row, stemming from South Korean court proceedings to seize and liquidate Japanese firms' assets to compensate Koreans for wartime labor.

Japan says all claims related to its former colonial rule over what is now South Korea were settled by a 1965 bilateral agreement under which it provided financial aid to Seoul on the understanding that the issue of compensation was resolved "completely and finally."

On the court proceedings, Japan urges the South Korean government to step in to resolve the situation but Moon says he respects the decision by the judiciary, putting the two countries in a deadlock.

The row has spread into the economic and security spheres, with Japan tightening tech-related export controls to South Korea in apparent retaliation and Seoul threatening to terminate the military intelligence-sharing pact known as the General Security of Military Information Agreement.

In November 2019, Tokyo and Seoul averted the termination of GSOMIA as South Korea conditionally backpedaled at the last minute on its earlier decision to scrap the agreement, citing security anxiety over the North.

"Prime Minister Yoshihide Suga will likely not make any proactive moves or come up with a special arrangement toward mending ties with South Korea," said Susumu Kohari, professor at the University of Shizuoka.

Kohari said Suga apparently "distrusts" Moon for not upholding the 2015 comfort women agreement that he worked on as chief Cabinet secretary.

Under the deal reached between the governments of Prime Minister Shinzo Abe and President Park Geun Hye, the two countries agreed to "finally and irreversibly" settle the issue of Korean women who were forced to work in Japanese wartime military brothels, with Tokyo funding a foundation meant to help the victims.

However, the Moon administration has argued that it did not reflect the opinions of the surviving victims and Seoul dissolved the foundation. South Korean citizens' groups continue to erect statues symbolizing the women around the globe, much to the anger of Tokyo.

Even if the United States hopes to bring Japan and South Korea closer, the sensitive issue of wartime labor is an obstacle to those efforts and Washington will shy away from taking sides, at least openly, Kohari said.

Biden reflected on the difficulties in tackling the issue in an interview on The Atlantic in August 2016.

"I go to see Abe and he says to me, 'Will you help me with Park?' And I call her and say, 'Will you do this?' And I don't negotiate the agreement, but the end result was, because I had a personal relationship with both of them and they trusted me, I could be an interlocutor, that was more like a divorce counselor, putting a marriage back together," Biden told the U.S. magazine.

Among possible resolutions to the wartime compensation issue is a deal in which Tokyo will retract its tighter export controls on South Korea in return for Seoul shouldering compensation for former laborers and their bereaved families in place of the Japanese companies ordered to do so by the Supreme Court.

"But it's unlikely that Japan or South Korea will be immediately motivated to make such concessions" as they need to make sure they are not seen as "weak-kneed" ahead of year that will see a general election in Japan and South Korean political parties start their primaries to pick a presidential candidate, Kohari said.