Japan confirmed 2,810 daily coronavirus cases Wednesday as well as 555 people with severe symptoms, both record highs, as the country continued to grapple with a spike in infections.

Tokyo, the hardest-hit of the country's 47 prefectures, reported 572 new infections, its second-highest daily figure since the start of the pandemic. The capital logged a record 584 cases on Saturday. 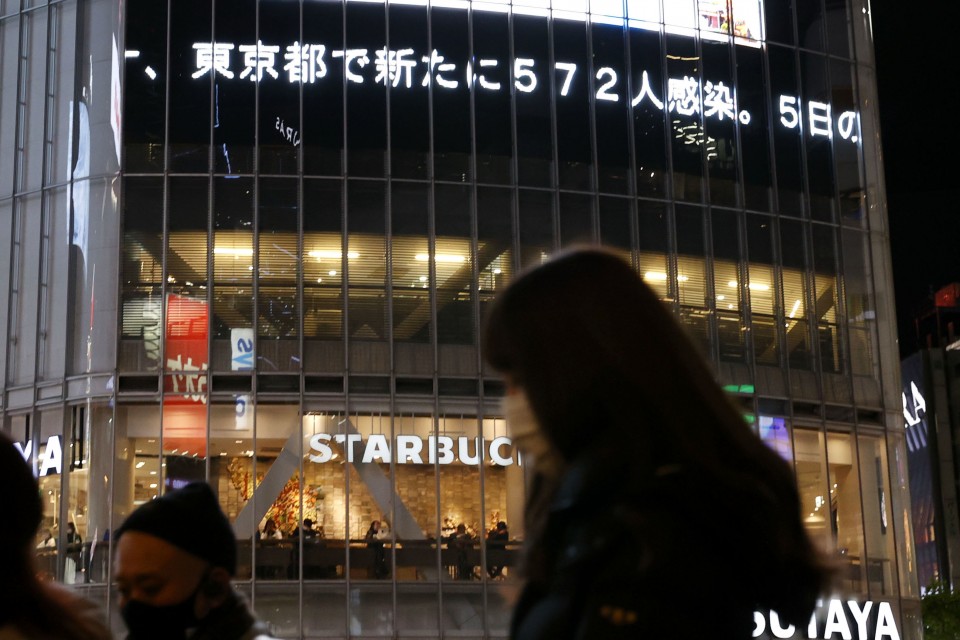 A large screen in Tokyo's Shibuya area shows news that the Japanese capital confirmed 572 new coronavirus cases on Dec. 9, 2020, the second-highest daily total after the 584 recorded on Dec. 5. (Kyodo) ==Kyodo

The capital and other urban areas like Osaka and the country's northernmost main island of Hokkaido have seen rising novel coronavirus infections since November.

In order to contain the recent resurgence of infections, medical experts reiterated that the Japanese public should reconsider traveling, with the year-end and New Year period approaching when people usually take trips to spend time with their families.

"When it comes to countermeasures against infection, it is important not to spread the virus to others. I would like people planning to travel to think once again whether they need to take trips now," said Toshio Nakagawa, the head of the Japan Medical Association.

Shigeru Omi, who heads the government's panel on virus countermeasures, also called for the suspension of Japan's "Go To Travel" subsidy program in areas of the country that have seen a rapid spread of infections.

"It is better to suspend it now considering the current situation regarding the virus. (The government should) restart it after the number of infections drops to gain public understanding and help the economy," Omi told a subcommittee of the House of Representatives.

The domestic travel campaign began in July to support the tourism industry battered by the pandemic. However, trips to Sapporo, the capital of Hokkaido, and Osaka were excluded from the program last month due to rising infections, and some medical experts have said the campaign has possibly contributed to the recent spike in cases.

Hospital beds and lodging facilities provided for COVID-19 patients have been increasingly occupied due to the recent increase in cases, raising concern about a possible collapse of the health care system. 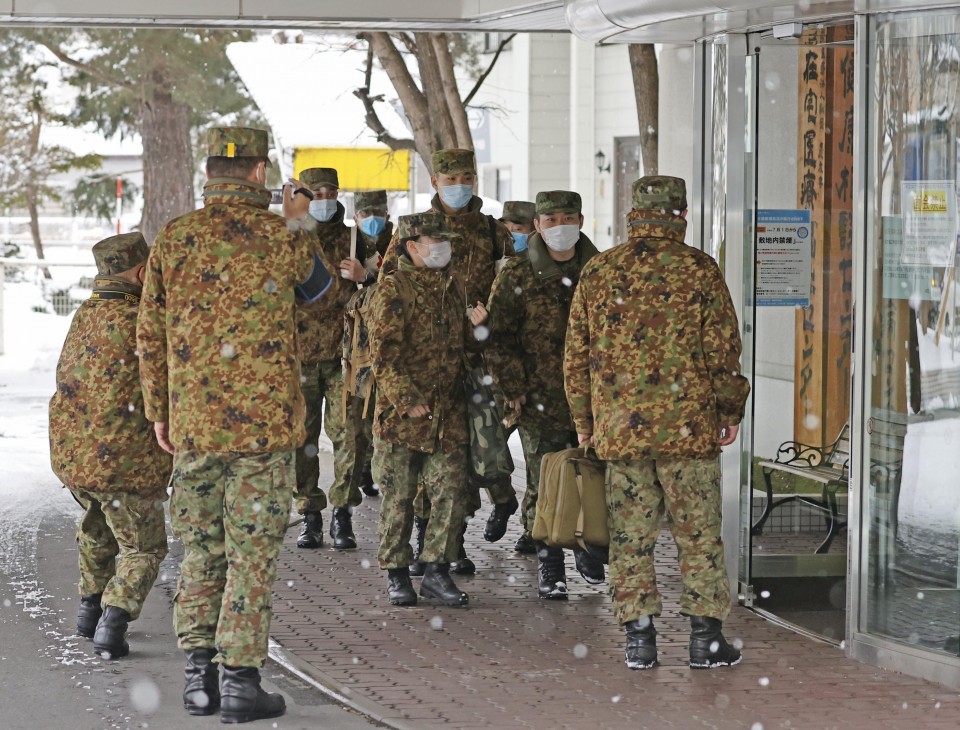 Nurses from the Japanese Self-Defense Forces arrive at Yoshida Hospital in Asahikawa, Hokkaido, on Dec. 9, 2020, due to a shortage of health care workers following a series of cluster coronavirus infections in the northern Japan city. (Kyodo) ==Kyodo

Ground Self-Defense Force nurses started working the same day at facilities in Asahikawa, Hokkaido, after being dispatched to the northern Japan city to help it cope with a shortage of health care staff.

The nurses, who will stay for up to two weeks, started assisting medical staff at a hospital and a facility for people with disabilities, both of which have recently seen cluster infections.

Defense Minister Nobuo Kishi said Tuesday that about 10 GSDF nurses would be sent to Asahikawa following a request from Hokkaido Gov. Naomichi Suzuki.

"Members of the SDF have been sent here as a last resort. We want their support in containing cluster infections," said Go Asari, who is in charge of anti-virus measures at the city's health center. 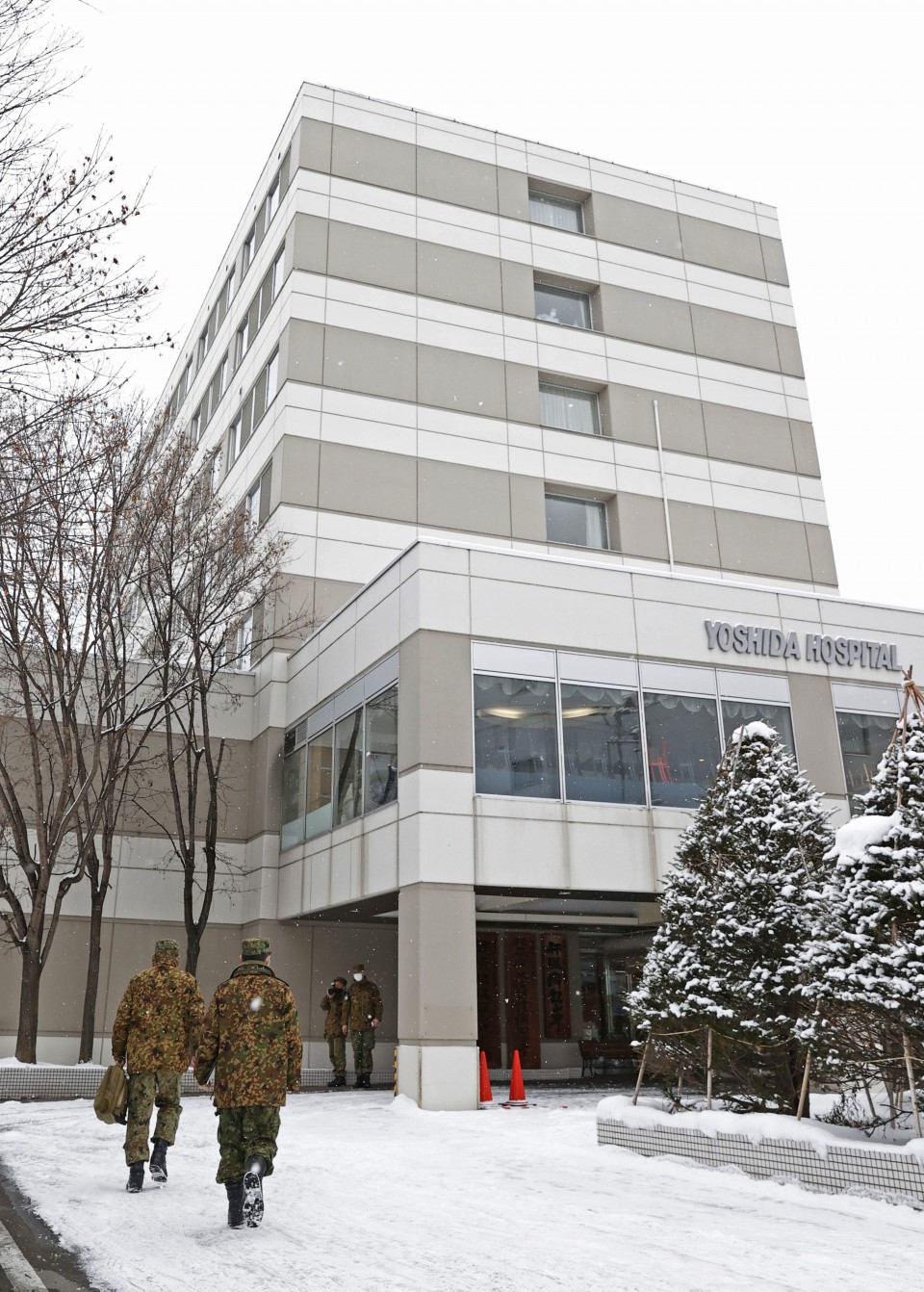 Photo taken Dec. 9, 2020, shows Yoshida Hospital in the city of Asahikawa in Hokkaido, northern Japan, where 195 people have been infected with the novel coronavirus. Nurses from the Ground Self-Defense Force have been sent to Asahikawa as the city faces a shortage of health care workers due to a recent spike in coronavirus infections. (Kyodo) ==Kyodo