The number of bankruptcies in Japan's dining industry will likely hit an all-time high in 2020 as many establishments struggle to restore their cash flow amid the ongoing coronavirus pandemic, the results of a recent survey showed.

According to the survey conducted by Tokyo Shoko Research, bankruptcies of companies with debts of at least 10 million yen ($96,000) from January to November stood at 792, an increase of 8 percent compared with the same period last year. 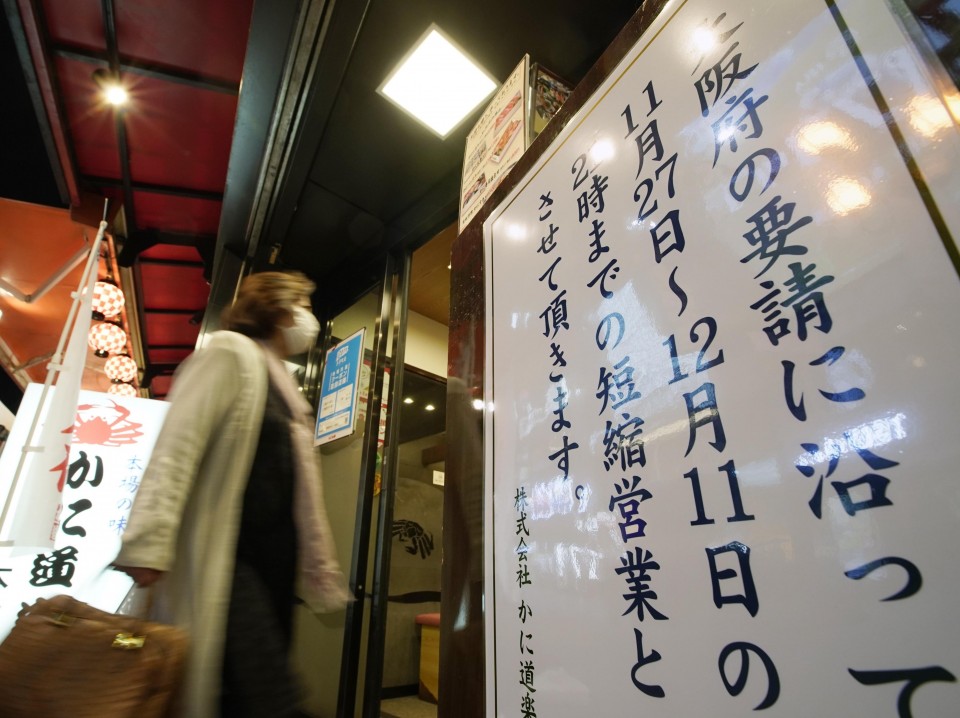 A sign in front of an eatery in Osaka's major entertainment district of Minami notifies customers on Nov. 26, 2020, of shortened business hours. (Kyodo)

With Tokyo and some other local governments once again requesting that dining establishments shorten their business hours due to a resurgence in infections, the figure is almost certain to surpass the previous annual record of 800 set in 2011.

Eateries specializing in a particular cuisine, such as Japanese food or ramen noodles, made up the largest portion of bankruptcies at 192. It was followed by cafeterias and restaurants at 184, and "izakaya" Japanese-style pubs at 162.

By prefecture, Osaka saw the most bankruptcies among eateries at 146 cases, followed by Tokyo at 129 and Aichi at 76.

In a sign that COVID-19 is also taking a toll on establishments smaller in scale, the number of bankruptcies totaled around 2,400 when taking into account businesses that have voluntarily closed down or gone bankrupt with debts of less than 10 million yen.

"Even if companies have ample funds in hand due to loan services at zero interest rates and without securities, it seems they are unable to cover wages and other costs without sales recovering," a Tokyo Shoko Research official said.

The dining industry was also hard hit in 2011 after the Great East Japan Earthquake triggered an economic downturn and a restraint in spending.

Rising wages due to Japan's labor shortage means that the number of bankruptcies has remained at 700 or over since 2017.