A growing number of Japanese prefectural high schools are relaxing or scrapping gender codes for uniforms to meet the needs of transgender and other sexual-minority students, with around a third of prefectures taking such steps in response to an Education Ministry request five years ago. 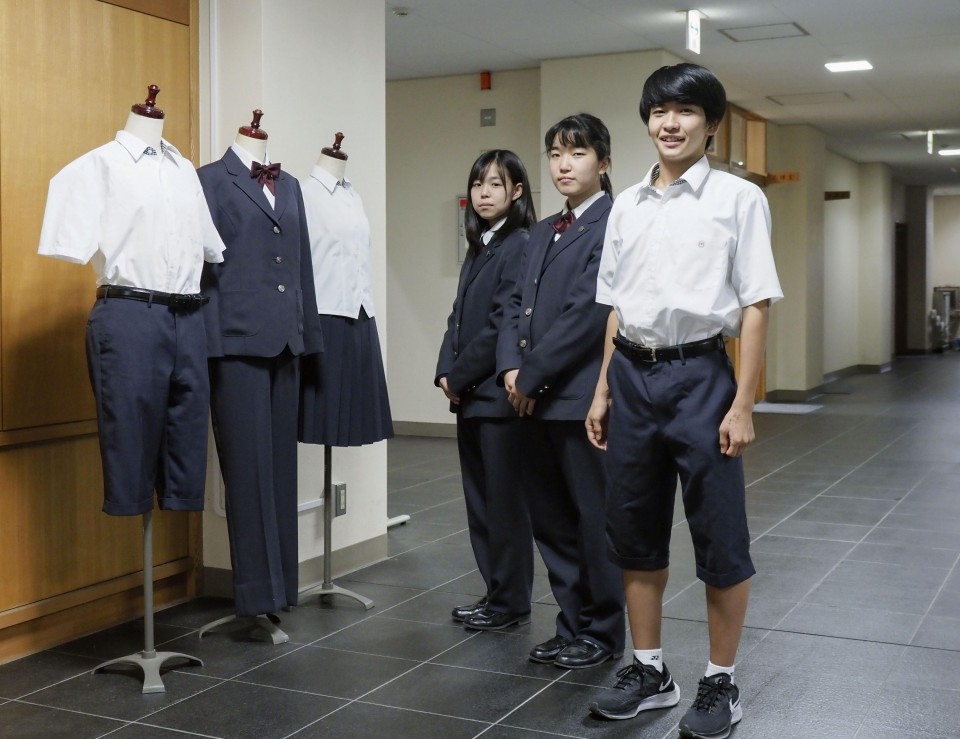 To win broad acceptance, meanwhile, many are pitching the changes as a move that benefits students as a whole by increasing flexibility for the sake of comfort and convenience.

Kyodo News surveys of education boards found that more than 600 prefecture-run schools in at least 19 of Japan's 47 prefectures have relaxed restrictions regarding uniform dress codes, such as permitting girls to wear trousers instead of skirts.

Some schools in the 28 other prefectures have followed suit, although definitive data is not available from their education boards. Nevertheless, inquiries by Kyodo News found that school uniform choices will be expanded nationwide to all prefectural high schools starting next spring.

Clothes once viewed as "standard attire" on school campuses have caused mental anguish for students who identify as transgender, as well as in some cases for lesbian, gay and bisexual students.

In August, a student at a high school in Tokyo's Edogawa Ward, who was born as a female but identifies as male, made a fervent pitch to Mayor Takeshi Saito to "stop the rise in kids hurt by school uniforms," demanding that all schools in the ward offer students a choice of uniforms unrelated to gender.

"I used to have to stifle my emotions and thought of dying before reaching adulthood," said the student, who chose a high school that allows students to wear their own clothes after the bitter experience of being made to wear a skirt in junior high school.

Saito has suggested he will consider degenderizing school uniforms.

"By increasing the choices, it offers a lifeline for students who need it," said Ryosuke Nanasaki, 33, representative of the group LGBT Community Edogawa and students who support the initiative in the ward.

The most common step has been to allow trousers for female students but schools are also dropping designations of uniforms as male or female and even allowing students born as males to wear skirts. Among high schools with no choices available as a general rule, some will address uniform concerns on a case-by-case basis if there are such requests.

According to Nanasaki, while allowing female students to wear trousers is a relatively uncontroversial step, at least one school official has expressed a fear that "students who were born male but decide to wear skirts might become the targets of bullying."

While insisting that such a choice should nevertheless be made available, Nanasaki said "understanding among adults is still very much lacking."

A faculty member of a public high school in Kyushu where students are allowed to choose their uniforms also admitted that the policy could backfire if "the appeal is only made in consideration of sexual minorities."

Unless the rationale is broadened, such students might hesitate to wear the uniforms they would feel most comfortable in for fear of standing out.

"It's important that the students be able to choose freely no matter what the reason is, including for functionality," the faculty member said.

"If I wear trousers, I don't have to worry about my legs freezing. I also don't have to be concerned about my skirt turning up when I pedal my bicycle. I won't be going back to skirts," Matsumoto said.

Fujieda Nishi introduced trousers for girls in fiscal 2019 and began allowing three-quarter length pants for boys in the current fiscal year. "They're cool in the summer and easy to move around in," said Daiki Tsuneki, 16, a freshman at the school who has purchased the new trousers.

Kyodo's surveys of the boards of education were conducted from October to November, with education officials able to verify a total of 639 schools in 19 prefectures that allowed a choice of student uniforms at high schools. The highest numbers were in Hokkaido, Tokyo, and Chiba with 97, 93 and 73 schools, respectively.

In principle, only full-day schools were tabulated, but Hokkaido Saitama and Tokyo included part-time schools. The tabulation period also varied depending on each board of education, and the number of high schools might have fluctuated since the survey was conducted.

According to a survey by the Education Ministry, about 3,500 public high schools nationwide, including full-time and part-time prefectural and municipal schools, have introduced school uniform choices. 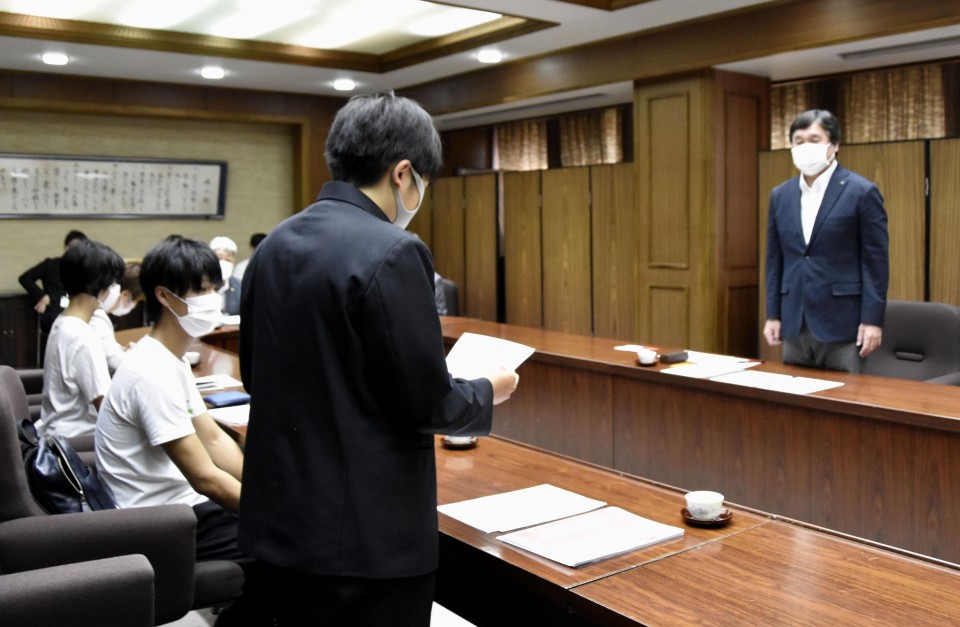 Ryosuke Nanasaki (2nd from R, front row) makes a pitch to Mayor Takeshi Saito (R, back) of Tokyo's Edogawa Ward in August 2020, demanding that students be given a choice of uniforms at all schools in the ward. (Kyodo)

In 2015, the Education Ministry issued a notice calling for consideration of sexual minority children, leading to an increase in the number of high schools offering options regarding school uniforms.

According to Hiroko Onitsuka, a student guidance counselor at Fujieda Nishi, the school considered major overhauls to uniforms from 2018. Although women's trousers were immediately approved, there was pushback on men's three-quarter-length pants.

Boys at the school had already fallen into the habit of rolling up their trouser cuffs to deal with the oppressive summer heat.

A cooler uniform was proposed for "for today's global warming climate," but there was concern at the impression they might give.

After getting a clothing manufacturer to produce prototypes and evaluating the uniforms for appearance and comfort, the school got some of the students on board. Because of the extra cost, so far, only a handful of boys and girls have opted to buy the new uniforms, but the school hopes its liberal uniform policy will be one of the key attractions in the future.

"To get students to wear the school uniforms faithfully, it is important that we give them a choice that matches what they desire as an individual," said Onitsuka.