Japan confirmed record daily coronavirus cases of 3,041 on Saturday as the country struggles to cope with a resurgence of infections, with Tokyo and several other prefectures reporting single-day records. 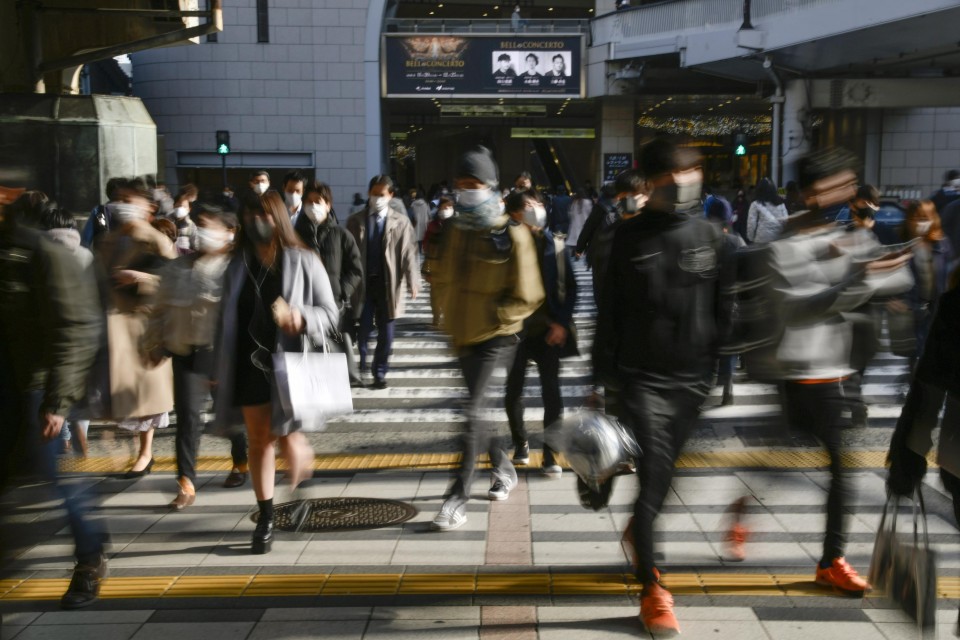 People wearing face masks walk in front of JR Osaka Station in western Japan on Dec. 12, 2020, as Japan struggles to cope with a renewed surge in coronavirus cases. (Kyodo) ==Kyodo

Tokyo reported 621 cases of new infections on Saturday, surpassing the previous record of 602 marked on Thursday, while Saitama bordering Tokyo, Kyoto, Nagano, Gifu and Iwate were among other prefectures seeing an all-time high in daily cases.

In most areas of Tokyo, restaurants, bars and karaoke establishments that serve alcohol have been asked to shorten their business hours and close at 10 p.m., though it is not among the cities excluded from the central government's travel promotion program to support the pandemic-hit tourism industry.

The recent surge in coronavirus cases, in what medical experts call a third wave for Japan, has raised the alarm about increasingly stretched health care systems in some areas hit hard by the pandemic. The Self-Defense Forces has dispatched nurses to a city in Hokkaido that is facing a shortage of medical staff to treat COVID-19 patients.

The number of patients showing severe COVID-19 symptoms rose to an all-time high of 578, increasing by 24 from the previous day.

Iwate, which had no confirmed coronavirus cases among its residents until late July, reported 43 cases on Saturday as 38 people contracted the virus in cluster infections at a hospital, according to the prefectural government.

Prime Minister Yoshihide Suga has said all citizens should raise their guard against the virus but his government is not considering suspending the travel program or issuing another state of emergency.

The Japanese capital started to see the number of cases rise sharply in mid-November and is the hardest-hit among the country's 47 prefectures with over 46,000 cases confirmed to date.

A panel of medical experts on Friday urged the central government to halt the subsidy program aimed at spurring domestic travel in areas where medical systems are under strain. But Suga has been reluctant to roll back the program as he seeks to balance supporting the economy and fighting the virus.

Mobile communication carrier NTT Docomo Inc. said its subscriber data showed that the number of people moving through Japan's major train stations and entertainment districts on Saturday increased from a week earlier at 70 percent of the locations observed.

A 23-year-old woman from Chiba Prefecture who visited central Tokyo to have drinks with her friends said, "I'm not so worried about the increase in infections. All we can do is to take precautions like washing our hands."

Yukio Edano, head of the main opposition Constitutional Democratic Party of Japan, told reporters in Tokyo the "Go To Travel" subsidy program "needs to be suspended as soon as possible" to help arrest the spread of the virus.