Tokyo reported a record 822 new coronavirus infections on Thursday, topping the 800 mark for the first time and heightening concerns about the strain on the nation's medical system.

The figure was up from the previous record of 678 marked Wednesday, bringing the cumulative total in the Japanese capital to 49,490. The nationwide tally also hit a single-day record of over 3,200 cases.

The Tokyo metropolitan government raised its alert for the strain on the medical system to the highest of four levels. It is the first time that the most severe level has been reached since the pandemic began.

"We need to have a stronger sense of urgency, and I would like to share such a sense (with Tokyo residents) so as to protect our lives," Tokyo Gov. Yuriko Koike said in a press conference. 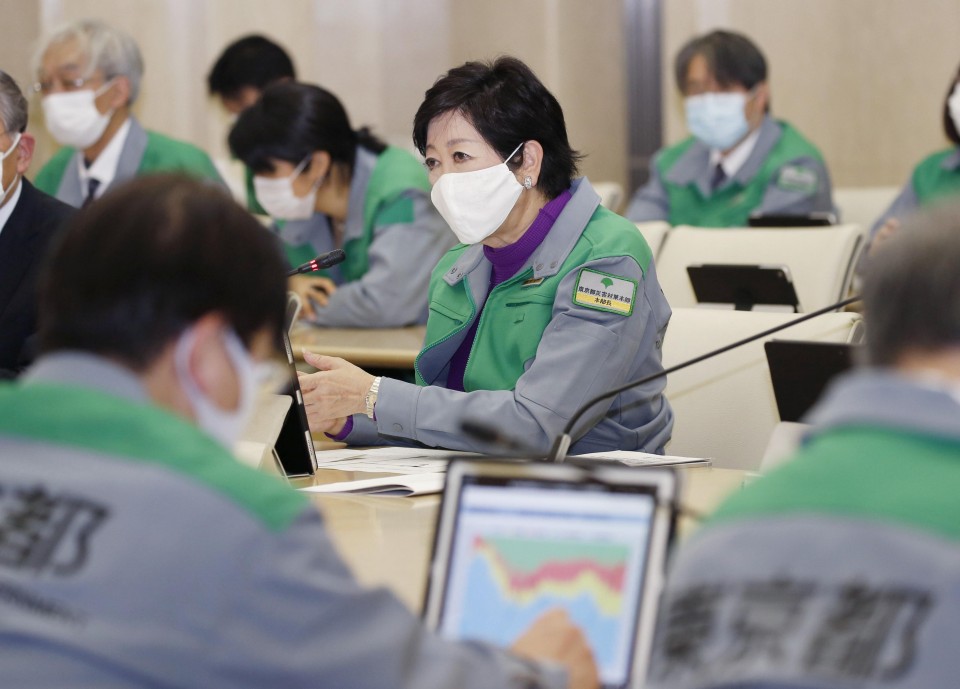 Tokyo Gov. Yuriko Koike speaks during the metropolitan government's conference to monitor the coronavirus situation on Dec. 17, 2020, at which the capital's alert for manpower and other hospital resources was raised to the highest level amid a surge in infections. Tokyo's daily coronavirus cases topped 800 for the first time the same day. (Kyodo) ==Kyodo

In a meeting to monitor the coronavirus situation in the capital, a panel of medical experts warned that an increasing number of hospitals have been forced to use ordinary beds for COVID-19 patients.

The panel also said there may be serious consequences if the current situation continues for another two weeks, adding the medical system may not fully function and public health care centers could also face serious problems.

While the capital has prepared roughly 3,000 beds for COVID-19 patients, nearly 70 percent, or 2,049, were occupied as of Monday. Of the 200 beds arranged for patients with severe symptoms, 78 were being used as of Tuesday.

Koike said she has requested that facilities secure 1,000 more beds for COVID-19 patients, including 50 more for people with severe symptoms.

Yasutoshi Nishimura, the minister in charge of Japan's virus response, said he has a "very strong sense of urgency" about the number of infections in Tokyo and that he wants to hold talks with Koike on how to deal with the situation.

The seven-day rolling average of new infections in Tokyo stood at 565.9 on Thursday.

The number of COVID-19 patients has been high since mid-November in Tokyo and topped 600 for the first time a week ago.

The metropolitan government raised its virus alert to the highest of four levels on Nov. 19 but had kept its assessment of the capital's medical system at the second-highest level.

Nationwide, the number of new infections has hit record highs in recent days. On Thursday, the cumulative total topped 191,500 and the death toll stood at about 2,800.

Among prefectures near Tokyo, Kanagawa confirmed 319 new cases on Thursday, topping 300 for the first time, authorities said. The Chiba prefectural government asked restaurants serving alcohol in 11 cities near Tokyo and Chiba city to shorten business hours from next Wednesday through Jan. 11.

In response to the surge in infections across Japan, Prime Minister Yoshihide Suga's administration said Monday it will suspend its subsidy program for promoting domestic tourism nationwide during the New Year holidays.