A Hong Kong court on Wednesday sentenced prominent pro-democracy activist Agnes Chow to 10 months in prison and fellow activist Joshua Wong to 13 and a half months after convicting them last week of inciting an unauthorized protest in 2019. 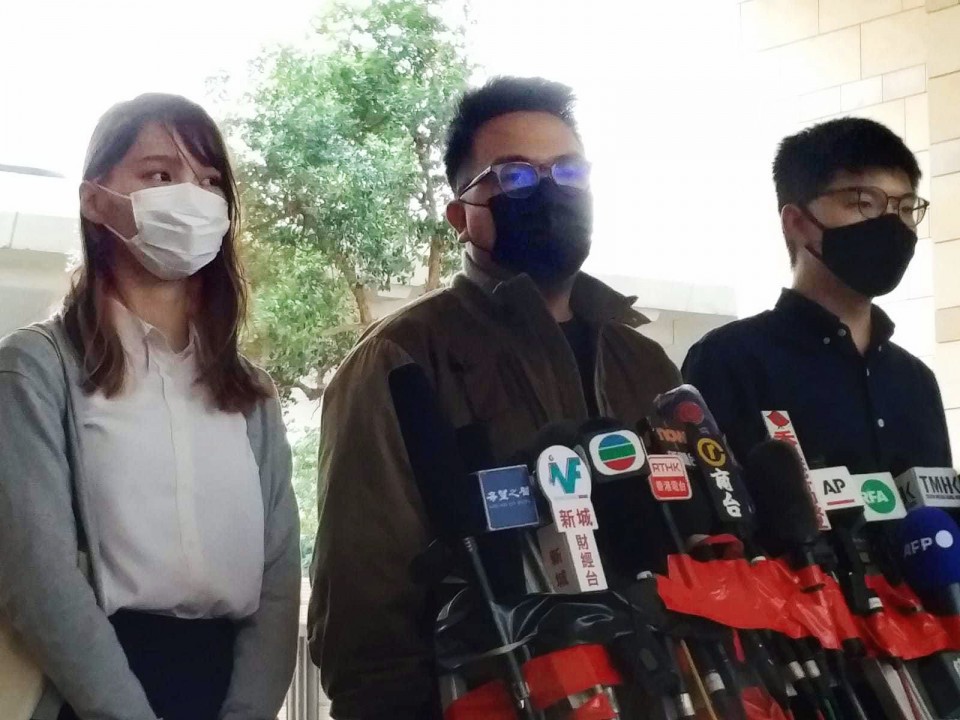 Pro-democracy activists (from L) Agnes Chow, Ivan Lam and Joshua Wong hold a press conference at a court in Hong Kong on Nov. 23, 2020. The three were remanded in custody the same day after the court convicted them of inciting or participating in an unauthorized protest around the police headquarters in June 2019. (Kyodo) ==Kyodo

The pair along with activist Ivan Lam were remanded in custody on Nov. 23 after the court found the three guilty of inciting or taking part in the June 21, 2019, event in which mostly young protesters besieged police headquarters.

Imprisonment is the first for Chow, who is turning 24 on Thursday. Wong, 24, has been imprisoned before. Lam, 26, was sentenced to seven months in prison on Wednesday.

The trio had been released on bail following their arrests over the case between August and September last year.

Magistrate Wong Sze-lai at the West Kowloon Magistrates' Courts said in her ruling that the severity of the crime, its risk of causing injuries and its premeditated nature warrant heavy sentences as deterrence.

The trio "committed the offense in a joint enterprise of which they were active participants," the judge said.

Although Chow had no previous criminal record, the judge said the severity of her misconduct outweighs mitigating factors except her guilty plea. She was also denied bail while she awaits appeal.

While Chow wept profusely as her prison sentence was meted out, Wong and Lam were relatively calm.

A tweet on Wong's Twitter account posted after the sentencing reads, "#JoshuaWong 13.5m in jail - via lawyers, it's not the end of the fight. Ahead of us is another challenging battleground. We're now joining the battle in prison along with many brave protestors, less visible yet essential in the fight for democracy and freedom for HK."

Lam's prison term was extended in view of his previous criminal record, the judge said.

The judge's decision to remand the trio in custody last week and the subsequent harsh sentencing came as the territory's authorities are seen to be increasingly willing to stifle dissent.

Four pro-democracy lawmakers were disqualified by the government after Beijing's parliament set out criteria for disqualifying "disloyal" Hong Kong lawmakers last month, prompting the mass resignation of the opposition camp.

A dozen opposition candidates, including Wong, were barred from standing in the September legislative election that was later postponed for a year for what was said to be the authorities' tactic to thwart the opposition camp's winning bid.

Eight opposition lawmakers and activists were also charged over disturbances during legislative meetings earlier this year, while other activists were charged with organizing unauthorized memorials for victims of China's 1989 Tiananmen Square crackdown.

About 30 people have been arrested since the sweeping National Security Law was put in place in June, including teen activist Tony Chung who was charged with secession and remanded in custody in October.

Student activist Keith Fong was arrested Wednesday for carrying laser pointers during last year's anti-government protests, which the police said were military-grade weapons that could cause blindness.

The protest occurred amid an intensifying anti-government movement that was spurred by a surge of opposition to the Hong Kong government's plan to allow suspects to be sent to mainland China for trial.

"Prosecution decisions must be fair and impartial, and the rights and freedoms of people in Hong Kong must be upheld," Raab said in a statement.

Amnesty International described the prosecution of the trio as "politically motivated," while calling for their convictions to be overturned and for their immediate, unconditional release.

"By targeting well-known activists from Hong Kong's largely leaderless protest movement, authorities are sending a warning to anyone who dares openly criticize the government that they could be next," the group's Asia-Pacific regional director Yamini Mishra said.