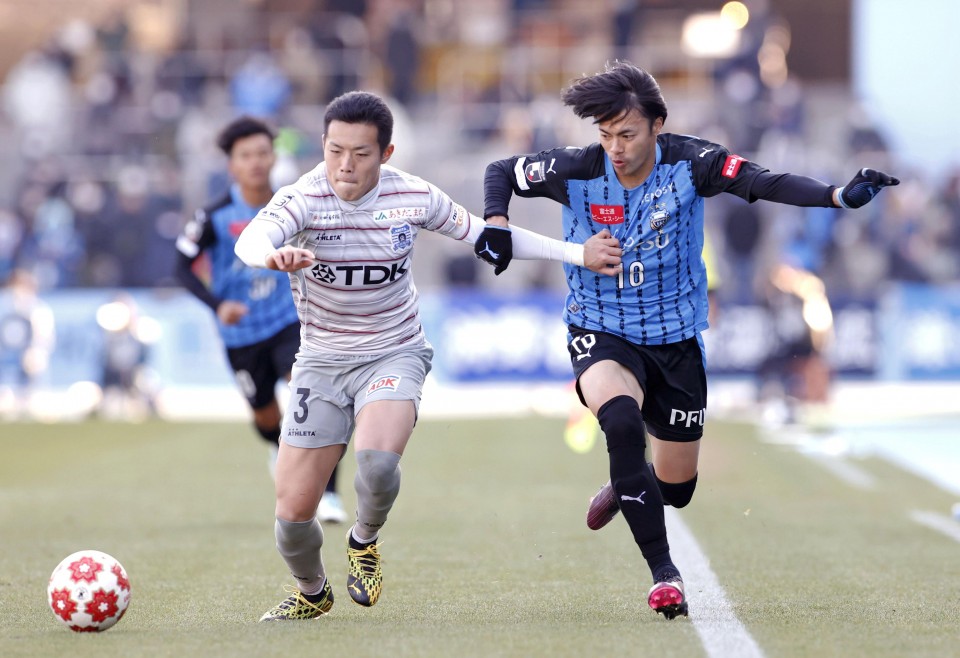 Kaoru Mitoma (R) of Kawasaki Frontale and Junya Suzuki of Blaublitz Akita compete for the ball during a semifinal match for the Emperor's Cup at Todoroki Stadium on Dec. 27, 2020. (Kyodo)

Despite dominating every facet, runaway J1 champions Kawasaki were made to work by Akita, who defended stoutly while looking to turn limited possession into quick counterattacks.

Toru Oniki's men finally broke down the visitors in the 39th minute at Todoroki Stadium, winning possession in attacking territory and setting up Mitoma with a pinpoint passing movement.

Charging into the left of the box, the 23-year-old star latched onto a diagonal ball from midfield conductor Ryota Oshima and angled his shot through the crowded area into the right of goal.

"It was great I could score that late in the first half," said Mitoma, one of Kawasaki's record nine selections to this year's J-League Best 11. "Ryota put it on a plate for me. It was all about the assist."

Tanaka nearly doubled the lead in the final minute of first-half regulation, thundering a shot against the crossbar from the edge of the area.

Akita gave the heavyweights a scare early in the second half when striker Naoki Inoue forced a diving save from Jung Sung Ryong, running onto a long ball and just getting his shot away as Shogo Taniguchi slid in for a tackle.

Tanaka was on target from distance in the 83rd minute, finding the net with a superb free kick after Oshima was fouled just outside the area.

Setting up in line with the left upright, the 2019 J-League young player of the year curled a right-footed shot over the wall and into the top-right corner.

Three-time J-League champions Frontale will try to send off club great Kengo Nakamura with one last trophy when he hangs up his boots after the Jan. 1 final at National Stadium in Tokyo.

"Our aim this season is to win multiple titles, and we all know how much we want the Emperor's Cup as we've never won it before," said the 40-year-old Nakamura, following his cameo as an 86th-minute substitute. 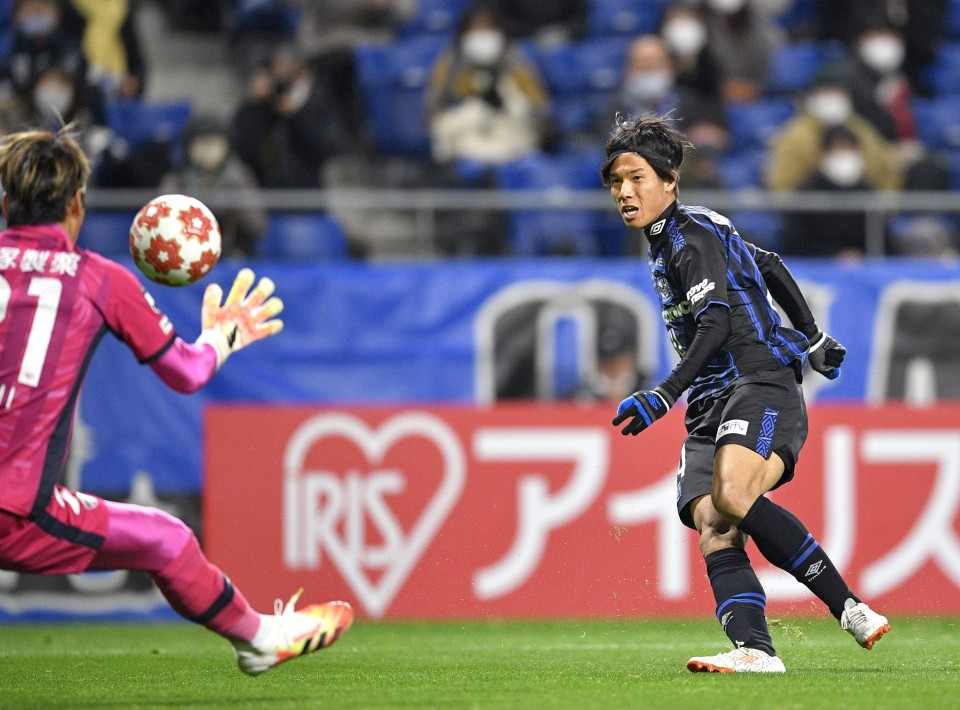 Yuya Fukuda of Gamba Osaka scores a goal during a semifinal match for the Emperor's Cup against Tokushima Vortis at Panasonic Stadium on Dec. 27, 2020. (Kyodo)

At Osaka Prefecture's Panasonic Stadium, Gamba stamped their authority in the second half after Tokushima came out swinging in their last match under outgoing manager Ricardo Rodriguez.

With the visitors dominating possession, Gamba spent much of the match absorbing pressure before Patric netted against the run of play in the 53rd minute.

Following a cross from Kosuke Onose, midfielder Shu Kurata unleashed a close-range shot that Tokushima keeper Naoto Kamifukumoto spilled in front of goal, allowing the Brazilian forward to poke home as both sides scrambled for the ball.

Late substitute Fukuda added the second on a breakaway in the 82nd minute, just moments after coming off the bench.

Kawasaki and Gamba entered from the semifinal stage as the only top-flight sides in this year's tournament, which has been pared back because of the coronavirus pandemic.

The Japan Football Association decided Thursday to halt general ticket sales for the Emperor's Cup, as well as the national high school championships, after the government retightened entry limits for large-scale events in response to rising coronavirus infection numbers.