The move is aimed at avoiding a public outcry over the scandal that could erode support for Abe's successor, Yoshihide Suga, the sources said. Abe, who stepped down in September but remains an LDP lawmaker, could make an appearance before the end of the year, they said. 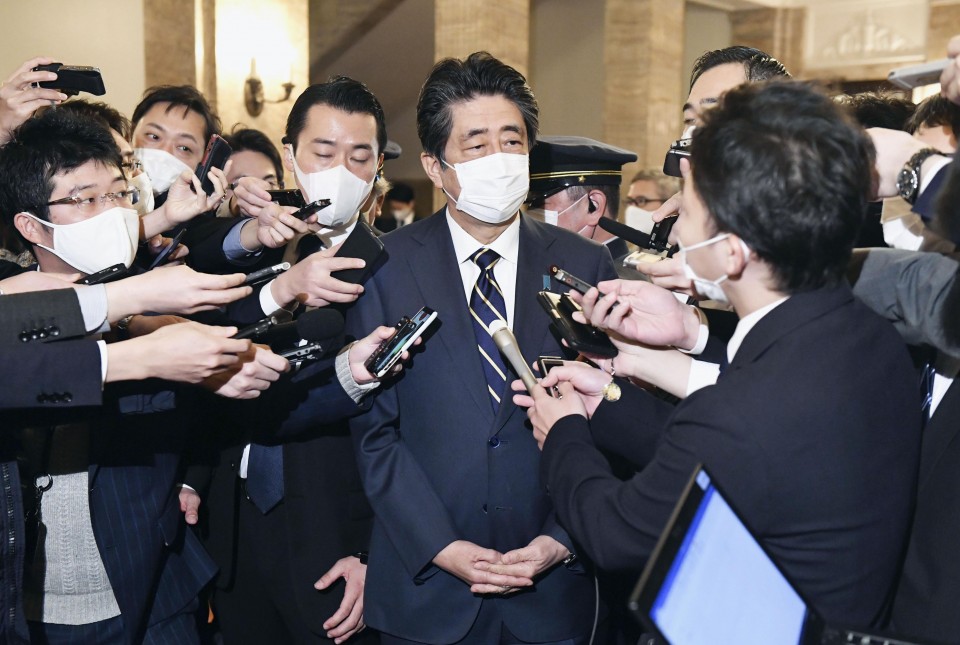 Former Japanese Prime Minister Shinzo Abe (C) speaks to reporters after a House of Representatives plenary session in Tokyo on Dec. 4, 2020, amid allegations that his political group illegally covered shortfalls in the cost of dinners for supporters. (Kyodo) ==Kyodo

Opposition parties have demanded that Abe answer allegations that a group which manages his political funds paid more than 9 million yen between 2015 and 2019 to cover part of the cost of dinner parties held at luxury hotels and attended by voters from his constituency in Yamaguchi Prefecture, western Japan.

Tokyo prosecutors are investigating the case and one of his aides has reportedly admitted to not keeping legally-required records of income and expenditures related to the dinner parties, which were held on the eve of the government's annual cherry blossom-viewing parties.

Abe, who while in office had repeatedly denied any impropriety, is expected to apologize for making what turned out to be being false statements to the Diet, according to the sources.

The LDP is considering calling the former prime minister to an out-of-session meeting of parliament instead of waiting for the start of the regular session on Jan. 18, the sources said, in order to avoid a drawn-out ordeal that could hurt the party in the upcoming House of Representatives election.

A date is expected to be set after deliberation with the Constitutional Democratic Party of Japan and other opposition forces.

A Kyodo News poll conducted this month showed even among LDP supporters, 53.1 percent of respondents thought Abe should be made to explain in parliament compared with 43.1 percent who saw it as unnecessary.

Meanwhile, the Suga administration has seen its approval ratings plummet due to dissatisfaction with its response to the coronavirus pandemic, with a separate graft scandal involving two former farm ministers also giving cause for concern.