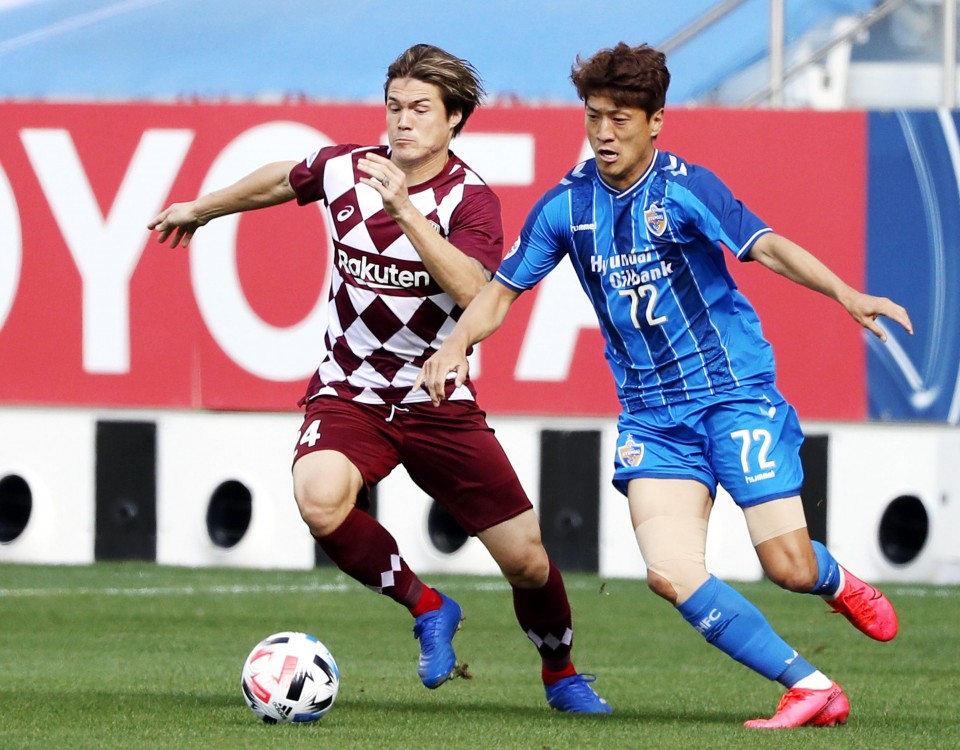 Vissel keeper Daiya Maekawa came out to challenge the Brazilian in the penalty area in the 117th minute, fouled him unnecessarily and then was unable to stop the perfectly placed penalty.

Without superstar playmaker Andres Iniesta, the Emperor's Cup champions struggled to organize their attacks. The Spaniard, out with a thigh injury suffered in Vissel's round-of-16 win, watched from the stands as Hotaru Yamaguchi scored from a set piece seven minutes after the intermission.

Defender Ryuho Kikuchi darted toward Takuya Yasui as he took a corner on the right, dragged his marker out of the penalty area and opened a lane for Yamaguchi to shoot through.

"Ulsan were stronger than we were," Yamaguchi said. "We played as hard as we could. Now our mission is to get better and we'll go home with our heads held high."

Daiju Sasaki appeared to put his team up 2-0 until his 75th goal was overruled by the video assistant referee. Vissel took possession in midfield but ostensibly committed a foul in the process, negating an otherwise slick attack as Sasaki volleyed in a blocked shot.

Six minutes later, Ulsan equalized through Bjorn Maars Johnsen. The goal was waved off for an offside call that was overruled by VAR.

Ulsan created the best opportunities in a first half in which both sides defended well. Midfielder Kim In Sung and Junior Negrao both threatened from close range, while Vissel mounted little in the way of coordinated attacks.

Ulsan came within inches of winning in the final seconds of regulation when Junior Negrao headed a powerfully struck cross off the post.

Maekawa pulled off a superb save in the fourth minute of extra time, but that proved to be Vissel's high-water mark as the J-League side failed to convert a string of defensive lapses by their opponents.

Brazilian striker Douglas, who in the absence of Iniesta, had carried the lion's share of the attacking burden since the semifinal, missed in the box early in the second period after a horrible back pass put him one on one with keeper Jo.

Douglas then had a header blocked from point-blank range before shooting the rebound over the open goal.

Ulsan now face Iranian club Persepolis FC on Saturday at Al Janoub Stadium as the tournament, completed behind closed doors in a "bubble" in Qatar, comes to a close.