Japan confirmed a record 2,973 daily coronavirus infections on Thursday, further raising concern over the strain on the medical system as the country continued to grapple with a spike in infections.

As the nationwide tally hit a record for the second day in a row, a panel of medical experts advising the health ministry on coronavirus response said cases have started to increase in areas that had been free of clusters, including Hiroshima, Kochi and Fukuoka prefectures.

The experts called on the public to "cooperate in having a quiet holiday without causing infections to expand through year-end and New Year parties and visits to hometowns" in a statement.

Tokyo also saw a record 602 daily coronavirus cases the same day. The figure, which surpassed 584 cases logged Saturday, brought the number of total infections confirmed in the capital to 45,529.

A panel of the Tokyo metropolitan government monitoring the pandemic assessed that it has become "difficult" for hospitals to provide usual health care services and treatment for COVID-19 patients at the same time.

"The medical system has started to become strained, and preventing an increase of new patients and those with severe symptoms is the top priority," the panel said.

Last month, the Tokyo metropolitan government raised its virus alert to the highest of four levels, and requested that restaurants and other establishments serving alcohol close at 10 p.m. until Dec. 17. Tokyo is the hardest-hit of Japan's 47 prefectures.

However, Masataka Inokuchi, a vice head of the Tokyo Medical Association, told reporters that it is unclear whether calls for shorter business hours at such establishments had been effective.

Large cities in Hokkaido as well as urban areas like Tokyo and Osaka have been seeing rising coronavirus cases since November, which has been described by medical experts as a "third wave" of infections in Japan.

Yasutoshi Nishimura, the minister in charge of Japan's virus response, said on Nov. 25 that "the next three weeks will be critical" to prevent the spread of the virus and to protect the country's medical system.

The government of the country's northernmost main island of Hokkaido decided Thursday to request residents to refrain from making unnecessary outings until Dec. 25 in the cities of Sapporo and Asahikawa, which have seen a strain on their health care systems.

Gov. Naomichi Suzuki said while it is "painful" to make such a request, the measure taken is meant "to protect the lives and health of the Hokkaido people."

The decision was made a day after nurses from the country's Ground Self-Defense Force started working at facilities in Asahikawa, after being dispatched to the city to help it cope with a shortage of health care staff. 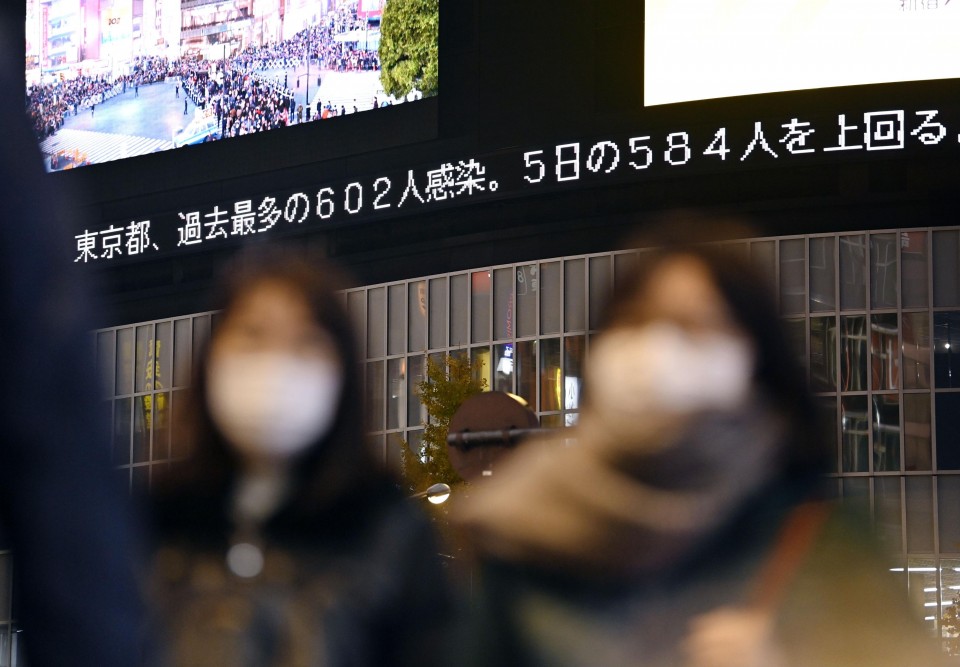 The news that Tokyo reported a record 602 new coronavirus cases is shown on a screen in Tokyo's Shinjuku district on Dec. 10, 2020. (Kyodo) ==Kyodo