Citing health reasons, the 70-year-old member of the ruling Liberal Democratic Party submitted his resignation to House of Representatives Speaker Tadamori Oshima, who accepted it. 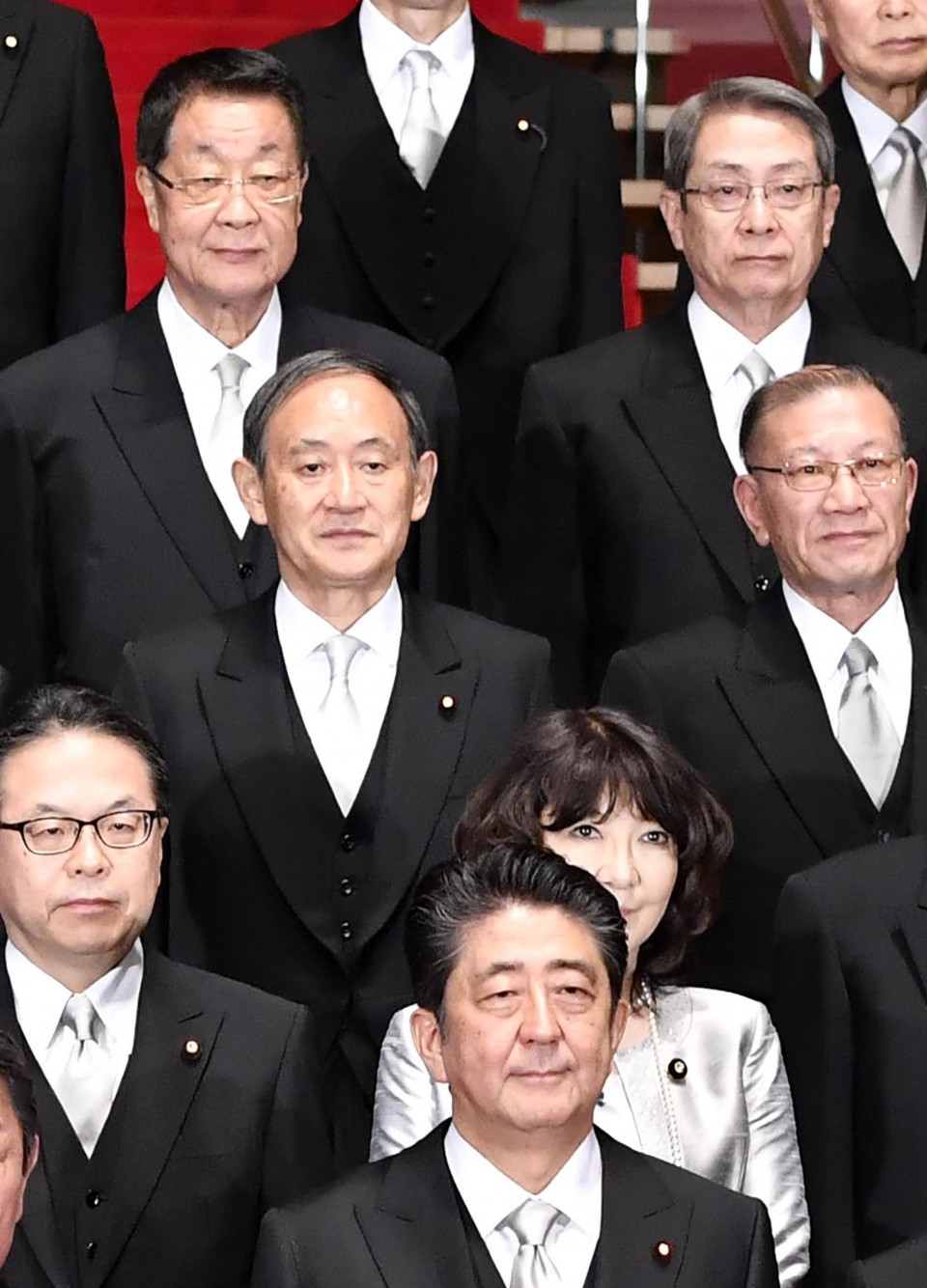 Farm minister Takamori Yoshikawa (L, 4th row) is pictured in October 2018 behind then Chief Cabinet Secretary Yoshihide Suga and other members of the Cabinet of Prime Minister Shinzo Abe (front) in Tokyo. (Kyodo)

The allegations against Yoshikawa are expected to hurt public support for Prime Minister Yoshihide Suga's government, whose approval ratings have recently plummeted over its handling of the coronavirus pandemic.

Yoshikawa is suspected of accepting cash from the then head of Akita Foods Co. in Hiroshima Prefecture on three occasions while he was minister of agriculture, forestry and fisheries between October 2018 and September 2019.

Tokyo prosecutors are apparently investigating the case in the belief that the then head of Akita Foods was courting Yoshikawa to win political favors for the egg farming industry.

Yoshikawa said in a statement issued by his office Monday he is suffering chronic heart problems and has been hospitalized.

"I have found it difficult to serve as a Diet member and believe I will not be able to carry out activities that will fulfill the mandate of the people," he said.

Yoshikawa's resignation leaves open a lower house seat in his Hokkaido constituency. A by-election is slated to be held on April 25.

Opposition lawmakers are likely to step up their criticism of the LDP-led government in the wake of a string of scandals.

Former Prime Minister Shinzo Abe was questioned by prosecutors on Monday over allegations his camp illegally covered shortfalls in the cost of dinner receptions attended by voters.

Earlier this month, another former farm minister, Koya Nishikawa, stepped down as special adviser to the Cabinet after the revelation that he went on a boating trip hosted by Akita Foods.

Tetsuro Fukuyama, secretary general of the main opposition Constitutional Democratic Party of Japan, wished Yoshikawa a speedy recovery but urged him to testify in parliament over the allegations.

"I can't help but question his decision to resign without giving any explanation. The public will not be satisfied," he told reporters.

Natsuo Yamaguchi, head of the LDP's junior coalition partner Komeito, said at a press conference that Yoshikawa "needs to address the allegations himself."