Tournament debutants Vissel Kobe reached the last eight of the Asian Champions League on Monday, dispatching Shanghai SIPG of China 2-0 in the round of 16 thanks to goals from Andres Iniesta and Daigo Nishi.

Atsuhiro Miura's men will be the only J-League representatives in the quarterfinals, after Yokohama F Marinos bowed out of the tournament with a 3-2 loss against South Korea's Suwon Samsung Bluewings in their last-16 clash. 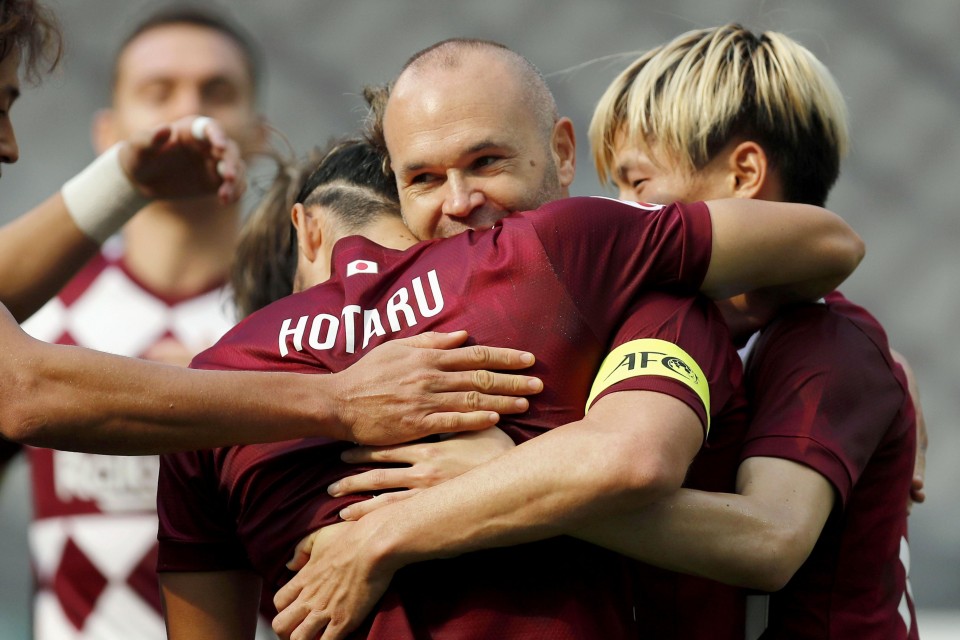 Andres Iniesta of Vissel Kobe celebrates with his teammates after scoring against Shanghai SIPG in an Asian Champions League match in Doha on Dec. 7, 2020 (Getty/Kyodo)

Iniesta's 31st-minute opener for Kobe was part of a masterful display by the Spanish World Cup winner, who threaded a low strike between three defenders and past Shanghai keeper Chen Wei, who touched the ball but could not stop it crossing the line.

The J-League club put a stranglehold on the match when midfielder Nishi netted their second five minutes after the break at Khalifa International Stadium, stretching his leg to meet a cross from Kyogo Furuhashi.

"The goal just happened to come my way. There are still lots of areas to work on and I want to improve during this tournament," said Nishi, who won the ACL two years ago with Kashima Antlers.

"We'll just aim to win the next game. What matters is being on the winning side at the end of 90 minutes."

The sight of Iniesta hobbling off in the 68th minute with an apparent sore right leg put a damper on an otherwise perfect outing for Kobe, who will play their quarterfinal in the tournament's Qatar "bubble" on Thursday.

After heavily rotating his squad in the last two group-stage games, with a spot in the knockout phase already secured, Kobe manager Miura brought big guns Thomas Vermaelen, Gotoku Sakai and Furuhashi back into the starting lineup alongside Iniesta.

Following sustained possession by the Emperor's Cup winners, Iniesta eventually delivered the goods. The former Barcelona icon turned inside the box after receiving a pass from Hotaru Yamaguchi and created the space to pull the trigger.

Shanghai SIPG looked to play through their own star, former Chelsea man Oscar, but the Brazilian fired wide of the mark with a free kick from the edge of the area five minutes later.

Having just missed scoring on a one-man counterattack near the end of the half, speedy forward Furuhashi was pivotal to Kobe's second goal.

After retaining possession in a tight space in the opposition box, Furuhashi played a quick ball back toward the goal where it was met by the jumping Nishi, whose effort bounced into the far post.

Iniesta and Nishi both went close as Vissel kept probing the Chinese side, who looked increasingly vulnerable to counterattacks.

Vermaelen used his body to block Wang Shenchao's close-range effort in the 73rd minute in a rare chance for the Chinese side.

In the day's second match at the ground, Brazilian forward Erik opened the scoring in the 20th minute for 2019 J-League champions Marinos, who were seeking their first-ever berth in the quarterfinals.

Kim Tae Hwan leveled the scores in the 57th minute for the South Koreans, who seized control of the match with goals in quick succession from Kim Min Woo and Han Seok Jong in the 82nd and 87th minutes, respectively.

Ado Onaiwu pulled a goal back for Ange Postecoglou's men in the 91st minute, but Suwon withstood a final push in the remaining three minutes of injury time.

After being suspended in early March because of the novel coronavirus outbreak, the ACL East zone returned last month in Qatar inside the bubble aimed at preventing the spread of infection. The winners of the East zone will meet Iran's Persepolis in the final.