A giant floating monument of the Olympic rings was reinstalled in Tokyo Bay on Tuesday ahead of the delayed games, having undergone safety inspections and maintenance since August. 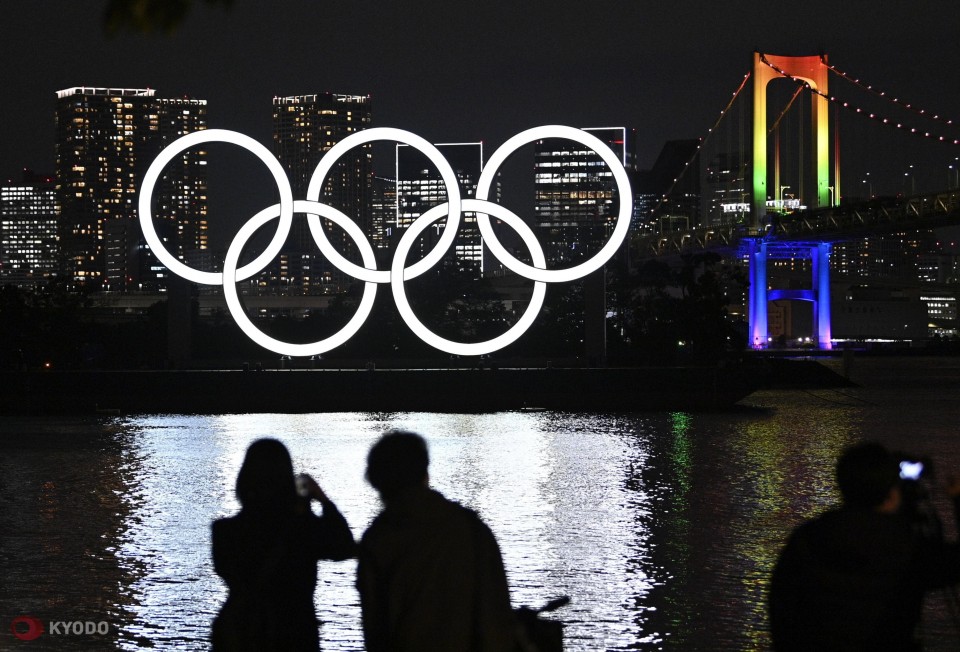 The Olympic rings glow in the dark after being reinstalled in Tokyo Bay off Odaiba Marine Park on Dec. 1, 2020, after they underwent a safety inspection and maintenance. The rings were temporarily removed in August following the Tokyo Summer Games' postponement until 2021 due to the coronavirus pandemic. (Kyodo) ==Kyodo

Illuminations etched against the night sky the shape of the monument measuring 15 meters high, 33 meters long and weighing 69 tons, which had been temporarily removed from the capital's Daiba waterfront area following the games' postponement for a year due to the novel coronavirus pandemic.

Repainted for a fresh look, the Olympic rings will be displayed until the end of the games next August and lit up in the evening every day, according to the Tokyo metropolitan government.

The monument was first set up in January but sent back to the factory in Yokohama, near Tokyo, where it was made for a series of examinations and some maintenance work.

A barge carrying the monument was towed in the morning into Odaiba Marine Park against the backdrop of the capital's landmark Rainbow Bridge and skyscrapers in the bay area.

Takayuki Kojima, a 70-year-old Tokyo resident who stopped to watch the operation, said, "I hope (the reinstalled monument) will lift up people's spirits in the run-up to the Olympics."

"I don't think there'll be much excitement even if the Olympics go ahead," said Haruki Hirata, 20, a vocational school student. "I think we can prevent a further increase of infections if we take sufficient measures against the novel coronavirus."

Tokyo, the hardest-hit area among Japan's 47 prefectures, reported 372 new cases Tuesday, up from 311 the previous day. The capital confirmed 9,857 coronavirus infections in November, surpassing the previous monthly record set in August by around 1,700 cases.

On Nov. 19, the metropolitan government raised its virus alert to the highest of four levels, given the recent spike in new infections.

The metropolitan government originally planned to set up Olympic-themed monuments at other locations including the peak of Mt. Takao in western Tokyo and Yoyogi Park in Shibuya Ward. But the plan has been postponed due to the pandemic.