Japan's ruling coalition approved a tax reform package for fiscal 2021 on Thursday, with planned extensions of tax breaks for home and car purchases to underpin the coronavirus pandemic-hit economy. 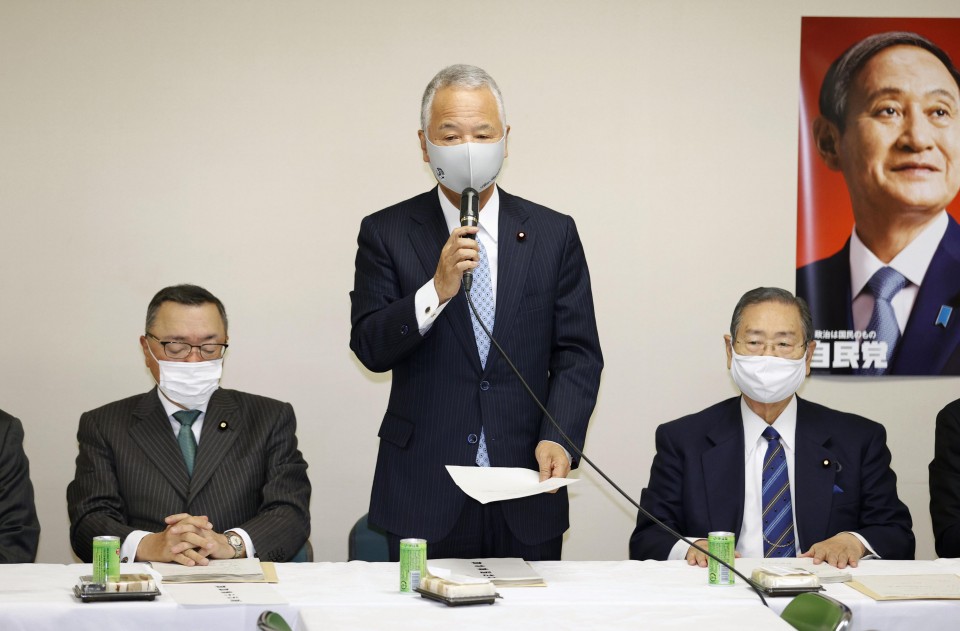 Akira Amari (C), head of the Liberal Democratic Party's Research Commission on the Tax System, speaks during a meeting at the party's headquarters in Tokyo on Dec. 10, 2020. (Kyodo)

The government is expected to approve tax reform plans for the fiscal year from April based on the ruling party proposals and submit bills related to the package to the ordinary parliamentary session beginning in January.

If realized, the reform package will entail state tax cuts worth 50 billion yen ($480 million) to 60 billion yen, Akira Amari, who heads the LDP's tax commission, said at a press conference, referring to "the unprecedented coronavirus disaster, which has caused damage to the economy."

"Before it's too late, we need to prepare now for future challenges" such as digitalization and carbon reduction through the tax system, Amari added.

Among envisaged incentives for home buyers is an extension of a special tax cut measure for people with housing loans.

At present, those who take out housing loans by the end of 2020 are eligible for a 13-year tax reduction, rather than the usual 10 years. The ruling parties propose that those who newly sign loan contracts by late 2022 would also receive such treatment.

Property tax, which was initially supposed to increase in fiscal 2021 due to the trend of rising land prices in recent years, will be kept at the same level as fiscal 2020 in all commercial and residential areas where tax hikes had been scheduled.

The measure is meant to reflect falls in land prices following the coronavirus outbreak and lessen the financial burden on taxpayers battered by the pandemic.

Japan's economy has been gradually recovering since the government completely lifted a state of emergency declaration over the virus in May, but consumption has yet to fully rebound.

Under the emergency declared in April, requests for people to stay home and nonessential businesses to suspend operations dampened economic activity.

As for incentives for car purchasers, the existing tax reduction for owners of eco-friendly vehicles will be extended by two years from the initial end date in May 2021. Meanwhile, conditions for such vehicles to receive tax breaks will be stricter, with the introduction of the latest environmental performance standards.

In the package, the ruling parties demanded a "fundamental revision" of the car taxation system in 2023, given the necessity for the auto industry to respond to the "once-in-100-years revolutionary change" it has been facing. A new taxation scheme based on mileage could be an option.

The taxation policy for next-generation vehicles is not only aimed at boosting demand hit by the pandemic but also promoting electric and other eco-friendly cars following Suga's recent pledge to achieve net-zero carbon emissions in Japan by 2050.

To financially support firms trying to slash greenhouse gas emissions, the government will deduct up to 10 percent of the value of investments for carbon reduction efforts from their corporate tax payments.

Pushing forward the country's digitalization, the government will also give preferential tax treatment to companies that regularly exchange data with other firms through cloud computing services. Some tax procedures will be digitalized.

Promoting digitalization is one of the signature policies of Suga, who took office in mid-September, as the pandemic has exposed the delay in the country's shift to digital procedures.

As part of efforts to turn Japan into a major international financial hub, tax incentives for long-term foreign residents will be implemented. Overseas assets owned by those who live in the country for over 10 years are currently subject to inheritance tax but will be exempted.

The government will also allow unlisted firms including investment funds to add executive remuneration to business expenses to help reduce their corporate taxes.