U.S. will not punish athletes for social justice protests at Olympics

The U.S. Olympic and Paralympic Committee said Thursday it will not punish its athletes who make statements of protest through kneeling, raising their fist or other peaceful actions at next year's Tokyo Olympics and beyond.

The committee said in an open letter that it will not sanction athletes for "respectfully demonstrating in support of racial and social justice for all human beings," challenging the International Olympic Committee's long-standing rule banning political protest.

"The diversity of #TeamUSA athletes is our strength." @MsMoushaumi highlights the power and duty athletes have to build a more inclusive world through sport. See more of what Moushaumi has to say to her teammates. pic.twitter.com/Y16rzNFUxI

Black Lives Matter protests have become commonplace in professional sports in the United States and elsewhere in 2020, but Rule 50 of the Olympic Charter prohibits athletes from making political, religious or racial demonstrations at an Olympic site.

"We believe that Team USA athletes, in line with athletes and teams in many other sports and leagues in the United States, can be a leading force for global good, and we are proud to advocate for the advancing opportunities and pathways for respectful athlete expression within our sports community," USOPC President Susanne Lyons said in a statement.

"Supporting this important work on behalf of Team USA athletes is a next step in our ongoing commitment to empowering the voice of athletes and living Olympic and Paralympic values. We look forward to collaborating further with our athletes, friends and partners around the world to fully harness the unifying power of sport."

In response to the USOPC's announcement, IOC Athletes' Commission chair Kirsty Coventry said in a statement that her group is gathering feedback before submitting a recommendation to the IOC's executive board by March next year.

Perhaps the most famous instance of athletes making a political protest at an Olympic Games occurred in 1968. 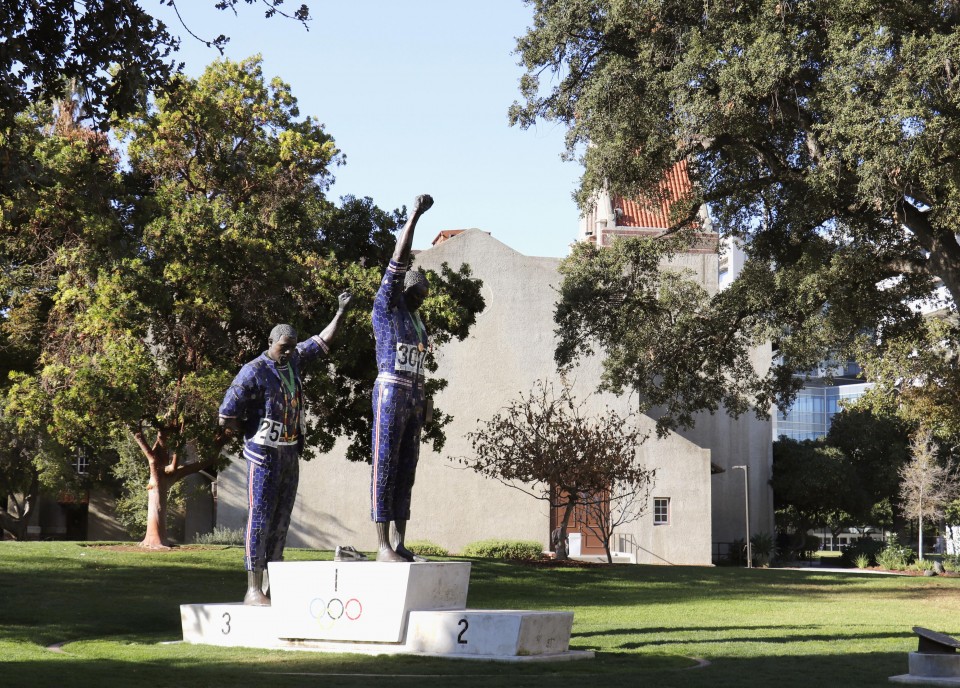 The Olympic Statue of Tommie Smith and John Carlos stands on the campus of their alma mater San Jose State University in California. (Kyodo)

At that year's games in Mexico City, American sprinters Tommie Smith and John Carlos each raised a black-gloved fist in the air in a "black power" salute while the U.S. national anthem played and they stood on the top and third step of the podium, respectively.

After pressure from the IOC, the U.S. team suspended the 200-meter medalists, but the photo of their act has since become one of the most iconic images captured at an Olympic Games.