World Athletics President Sebastian Coe said Friday he is positive the postponed Tokyo Olympics and Paralympics will go ahead next summer although under "different circumstances" due to the novel coronavirus pandemic.

Coe, a member of the International Olympic Committee, said he is "comforted" by Tokyo's "cast-iron determination" to deliver the games during his visit to the Japanese capital in October, which included a tour of the newly built National Stadium -- the main venue of the Tokyo Games. 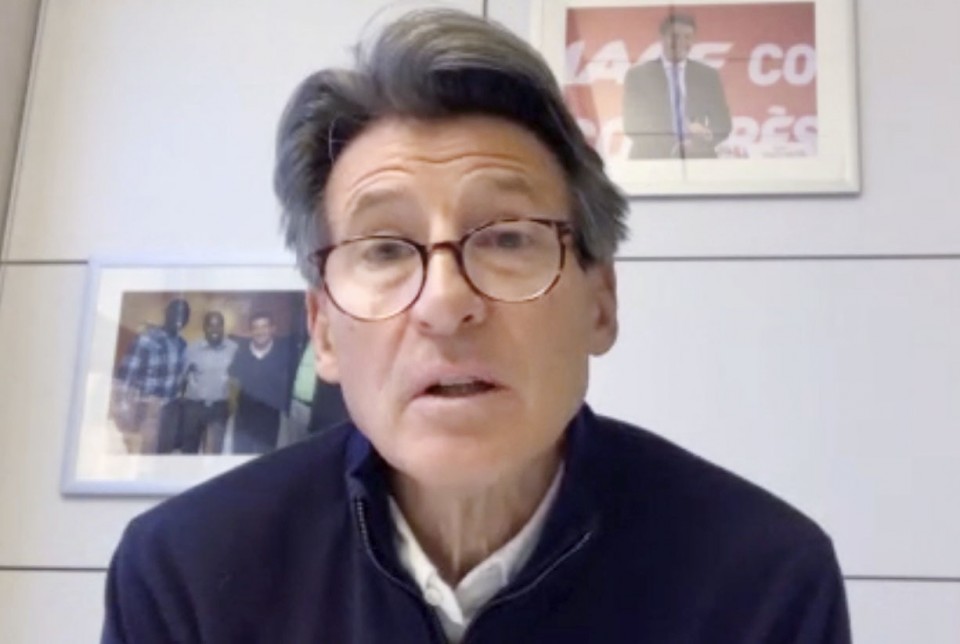 Sebastian Coe, president of World Athletics, gives an online interview on Dec. 11, 2020, as seen in this screenshot image. (Kyodo) ==Kyodo

"The games will go ahead," Coe, a British two-time Olympic 1,500-meter champion, said in an online interview with Japanese media. "Under different circumstances, under stressful conditions, but the games, I think, will go ahead."

However, a cloud of uncertainty still hangs over the games, including questions about how many spectators will be allowed into venues. Japan has been seeing an increasing number of virus infections since November, with similar trends observed in some other countries.

Coe expressed his desire to see venues filled with excited fans but recognized the situation can change in the lead-up to the games, which were postponed in March due to the global health crisis.

"It's clearly not anybody's preferred option to have events without people," the 64-year-old Coe said. "I personally hope, and still believe, that there's every good chance that there will be spectators in the stadiums, but those circumstances can alter. But I think we just have to be adaptable here."

The Japanese government, which has been discussing measures to safely hold the games, has said it will decide by next spring whether to admit international fans, as well as crowd-size limits.

IOC President Thomas Bach has said vaccines and rapid virus testing can help the games go forward, and indicated the organization could shoulder the costs to vaccinate athletes and officials.

"I don't think anybody should be forced to take a vaccination of any description if they choose not to. That has to be an individual and a personal view," he said. "I would hope that athletes, personally, will avail themselves of the vaccination if they can."

With seven months remaining until the Olympics open, Japan has been trying to gain support for staging the games amid public concerns over safety and ballooning costs.

In a survey held this month by Kyodo News, more than 60 percent of the respondents were against holding the Olympics and Paralympics next summer, including 32.2 percent demanding they be put off again and 29.0 percent saying they should be canceled.

Coe, who headed the organizing committee for the 2012 London Olympics, emphasized the importance of informing people of the games' value and the impact to the country in the years to come.

"It is very important...and I know this very well, that an organizing committee has to always test the temperature of the public," he said, adding, "Re-doubling efforts around communications over the next few months is going to be absolutely crucial."