Marriage and childbirth go hand in hand in Japan, perhaps more so than in many other developed countries, but for Rei Kakyoin, a self-identified asexual, the former was never an option.

Kakyoin, an unmarried manga artist living in the Kanto region who prefers to be identified by a penname, managed to realize a dream of having a child through artificial insemination despite being from a country where doctors are generally prohibited from assisting with sperm donations for commercial purposes. 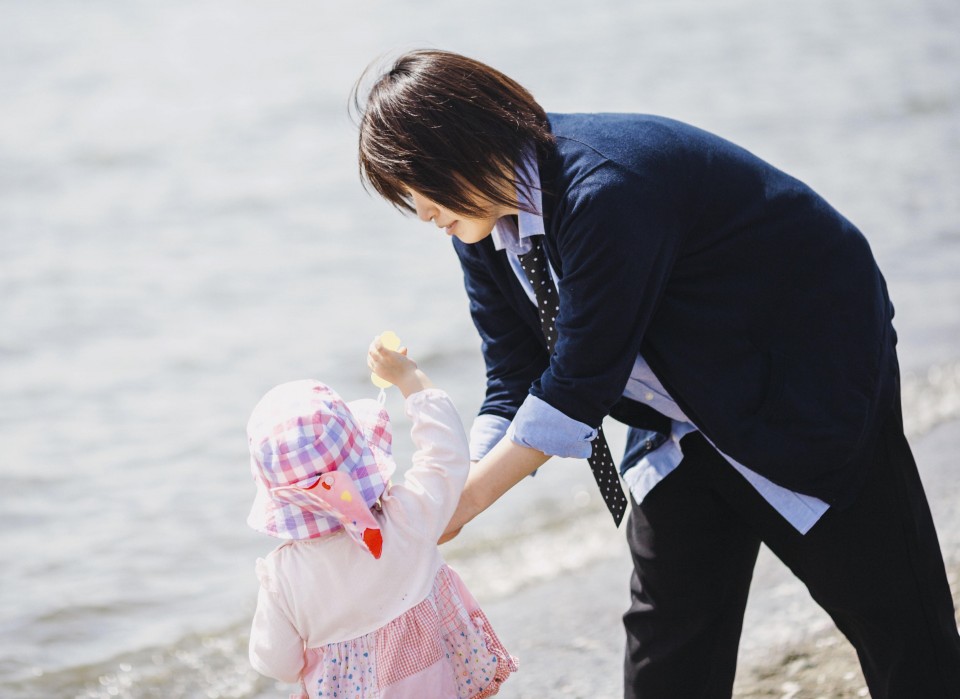 Rei Kakyoin plays with daughter in Tokyo in May 2019. (Photo courtesy of Rei Kakyoin)(Kyodo)

Choosing the father from a sperm bank in the United States, Kakyoin, 35, gave birth to a girl in the fall of 2016.

While a law was enacted on Dec. 4 in Japan's parliament to recognize as legal parents married couples who have children through donated eggs and sperm, concrete rules on the rights of children to seek the identity of their genetic parents remain undecided.

The new law stipulates that a woman who gives birth using a donated egg is the child's mother. It also says a husband who consents to his wife giving birth with donated sperm will be unable to deny that he is the child's father.

The addition to the current civil law, which both ruling and opposition parties supported, will come into effect a year after it is promulgated.

It does not, however, give children the right to seek disclosure of the identities of the egg or sperm donors, triggering criticism from groups representing them.

The legislation does not cover some other issues such as the buying and selling of eggs and sperm, as well as whether to approve surrogacy. It says legal measures will be considered to address those issues over the next two years.

The enacting of the law was welcome news to many, but the government's hesitation in eliminating the legal uncertainties is also driving people such as Kakyoin, and others who are unmarried and unwilling to wait, to look overseas.

Kakyoin started feeling uneasy about finding a sexual identity at a very young age and was unable to conjure romantic interest in either men or women. Eventually relating to the "asexual" or "X-gender" identity, Kakyoin still could not imagine falling in love and having children.

The desire to have a family, however, remained all-consuming.

Kakyoin chose a sperm donor with no history of medical issues who would allow the child to contact him as the biological father when the child turns 18.

The ampoules used to transport the semen, which arrived at Kakyoin's residence in Japan in cryogenic storage, had to be defrosted before conducting the insemination. The cost, including a shipping fee, was about 300,000 yen ($2,900) per trial, and Kakyoin became pregnant on the second attempt.

"I don't want my daughter to grow up alone," Kakyoin said recently, explaining the decision to begin in the fall of 2018 attempting to fall pregnant again via another overseas sperm bank.

Because of the difficulties involved in successfully completing the procedure alone at home, Kakyoin decided to get medical assistance for the next pregnancy attempt but was turned away at the first hospital due to the country's rules regarding sperm donations.

The Japan Society of Obstetrics and Gynecology does not allow its members to provide support to those who have paid to obtain sperm or eggs -- meaning many Japanese hospitals are reluctant to help people who have engaged sperm banks.

But more than 150 women in Japan still made use of a major Denmark-based sperm bank amid the absence of rules on business transactions related to sperm and ova, officials at the company, Cryos International, said last month.

The company launched consultation services in Japan in February 2019 and has since provided sperm to individuals in 30 of the country's 47 prefectures, including single women, sexual minorities, and women whose husbands are infertile.

The new law, which has a clause stating a child born by assisted reproductive technology should be "born in good physical and mental health" has also been criticized by a group representing people with disabilities, which argues that it harkens back to the now-discredited eugenics protection law that forced people to undergo sterilization under the banner of "preventing birth of bad offspring."

In response to this, a resolution to the bill was adopted that states, "Every child, with or without disabilities, has the right to be born and raised in a safe and favorable environment. Necessary consideration must be given to respect this."

In a recent nationwide survey conducted by Okayama University, more than 70 percent of respondents said a more comprehensive law regarding assisted reproductive technology, such as sperm and ova donation and surrogate births, was "necessary," while 65 percent said the "right to know one's linage should also be recognized."

Mikiya Nakatsuka, a professor at the university, said, "I think there are many people who were in disbelief that there was no law (until now). (A law) to encode the legal status of children is important, but the background of children is becoming more diverse, and we need to discuss common-law marriage, same-sex partners, and the positions of children with these couples."

Kakyoin was unable to get a hospital to assist in having a second child until consulting the sexual minority support group Kodomap, which introduced a hospital willing to engage an overseas sperm bank, albeit at a higher cost than the first pregnancy.

The hospital orders sperm from overseas sperm banks and removes eggs from the prospective mother to carry out in-vitro fertilization, which costs about 800,000 yen for one course.

"There is no other hospital willing to assist me. I have to trust them and just continue making visits," said Kakyoin.

Kodomap has been introducing people who hope to give birth via sperm or ova donors to hospitals since 2019 and has assisted in dozens of cases to date.

"More young people are choosing third-party donors," said the group's joint-representative Satoko Nagamura, 37, adding that a public agency that manages donated sperm and ova is essential to "prevent trouble, such as people who are unknowingly siblings marrying without realizing they share a donor parent."

Kakyoin also believes such a framework in Japan will be necessary for the future.

"Donors should be able to give their consent to be contacted when the child becomes a certain age, and a framework in which the information can be disclosed should be created."

Although worried about the timing of when to tell the daughter the truth about how she was conceived, Kakyoin intends to do so. But more importantly, "I want to tell her 'The main point is I am happy you were born, and that is why I wanted this so much.'"