Taiwan's military has been the object of growing domestic criticism as increasing Chinese aggression in recent years raises doubts about its ability to defend the island.

Believing the 180-kilometer-wide Taiwan Strait provided necessary protection, especially as U.S. support was expected in the event of an attack, successive governments have allowed the armed forces to languish, ignored and underfunded.

Since its election in 2016, the Democratic Progressive Party administration of Taiwan President Tsai Ing-wen has tried to reassure the public through promises of reforms and high-profile arms procurements that include F-16 fighter jets, submarines and Abrams tanks.

These purchases have only heightened scrutiny, however, as numerous local and international publications question the value of high-priced weapons in the hands of a military that Taiwanese strategic analyst and commentator Paul Huang earlier this year called "a hollow shell."

To the extent that analysts offer hope, it is to promote an approach used when the weaker side in a conflict avoids pitched battles in favor of hit-and-run tactics that exhaust the enemy, rather than trying to defeat it outright. 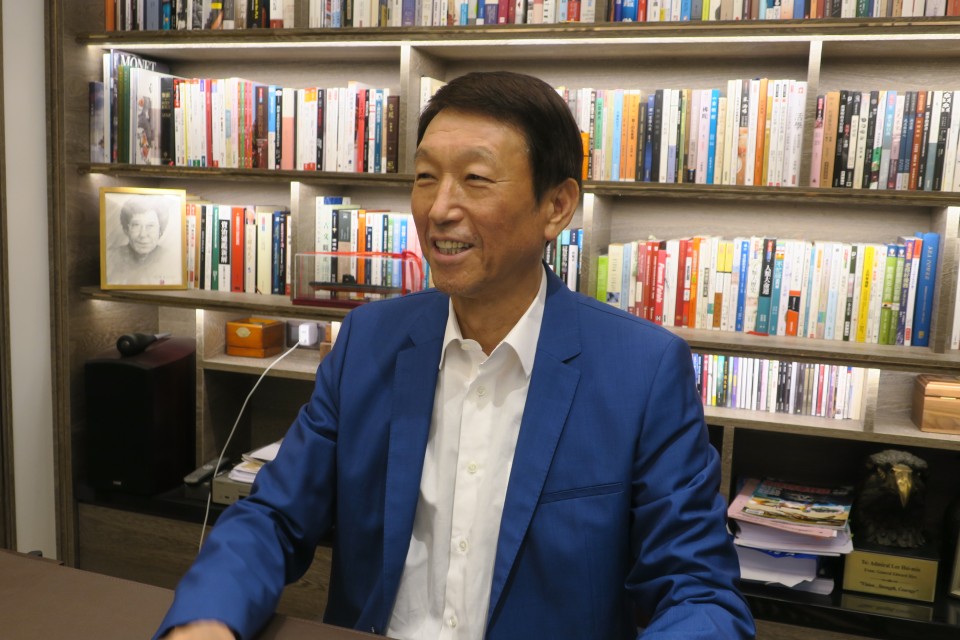 For Taiwan, such an "asymmetric defense" would provide an effective deterrent against the threat of Chinese invasion, contends former Taiwan Chief of General Staff, Adm. Lee Hsi-min.

While China's military is far stronger in its ability to wage a conventional war of attrition, Lee said in an interview, Beijing would not like to be drawn into a protracted conflict on the island, with potentially large losses for limited, if any, gain.

Lee characterizes asymmetric defense by quoting the late boxing great Muhammad Ali: "Float like a butterfly, sting like a bee," referring to the use of numerous small, mobile units that rely on speed, surprise and knowledge of local terrain to inflict damage on an occupying force, before fleeing to rearm and strike elsewhere.

"The hands can't hit what the eyes can't see," as Ali put it.

Lee advocates asymmetric capabilities not only in the active military, but in the 3.5 million reserve force of discharged soldiers and ex-conscripts meant to augment regular troops in the field.

Analysts, including Lee and experts at the U.S. RAND Corp., agree, however, that this reserve force is currently hypothetical, a paper army with little to indicate that an effective fighting force of that size could actually be mobilized.

Whether there are even enough rifles to arm that many troops is doubtful, while training to maintain combat readiness is limited to a few days every other year, with no tactical instruction or plans for deployment.

One of the RAND report's recommendations is that the reserve force be overhauled, with "at least two or three weeks" of "realistic" training every year, along with necessary funding.

At a time when the regular military is poorly trained and equipped, Lee said, "there is even less for the reserve force."

Also widely questioned is the effectiveness of conscription in preparing young men for future reserve duty. Beginning in 2013, the Defense Ministry began phasing out Taiwan's once robust system of compulsory military service in favor of an all-volunteer force, with a reduction from two years to the current four months of training, with little spent preparing for actual combat.

Not only do conscripts finish basic training without necessary skills, many resent it as a waste of time, adding to the public perception of the military's incompetence, and alienating just the kind of educated young Taiwanese needed not just to fill uniforms, but to operate sophisticated modern weapons systems. 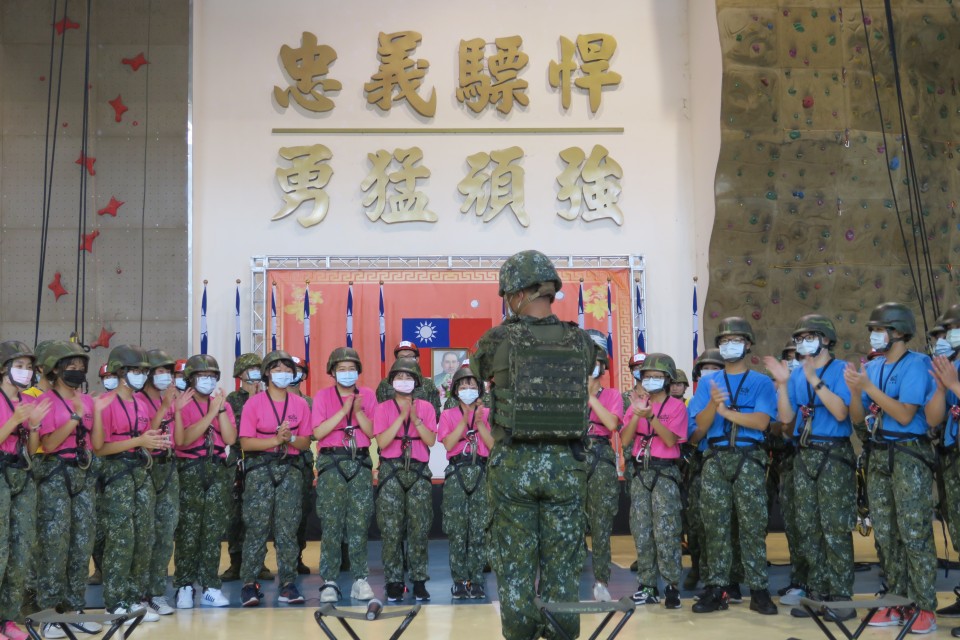 Participants in a special forces boot camp in Taoyuan City, northern Taiwan, listen to their instructor before practicing rope climbing on Aug. 5, 2020. (Kyodo) 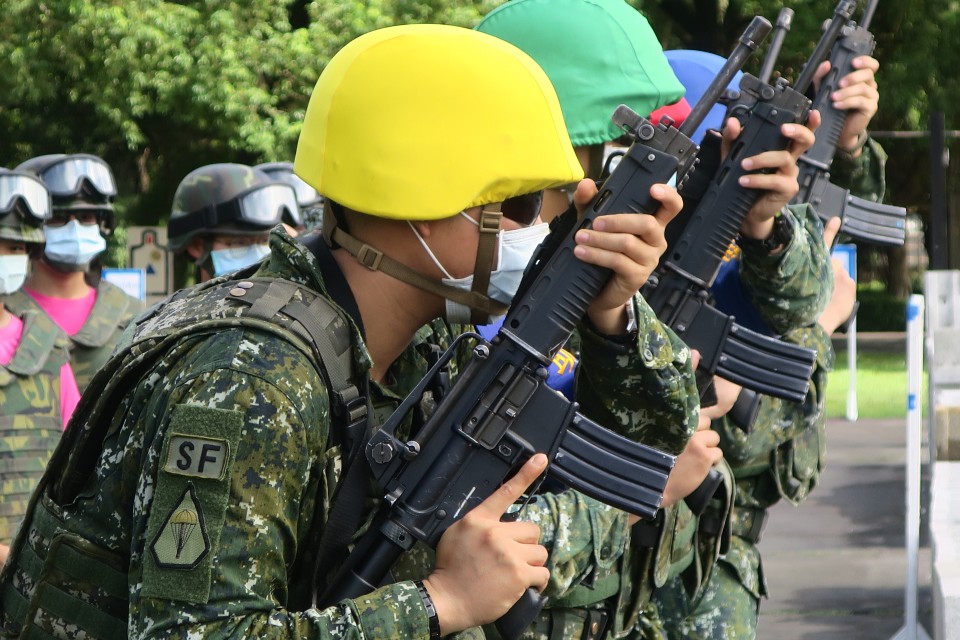 Asked if he felt prepared to defend Taiwan having completed his compulsory service, recent university graduate Johnny Tseng answered, flatly, "No." On how his training might be improved, Tseng suggested that it be "more detailed, specific, efficient and up to date."

Others, like 23-year-old Jonathan Chen, expressed the widely held belief that while necessary for defense, the military is for those who "don't do well in school or can't find another job."

While many agree that they are necessary, asymmetric reforms encounter two problems. The first is money at a time when the government has prioritized big-ticket items like tanks and fighter jets that have drained the defense budget.

Some analysts think this is a mistake.

Such weapons look good on paper, said Michael Hunzeker, assistant professor of government policy at George Mason University, but they are "prohibitively expensive" and not "well suited for Taiwan's defensive needs."

While Lee admits that "high visibility" weapons boost morale, he too is critical, saying that such weapons are expensive not just to buy, but to maintain. Their visibility also makes them easy to destroy, especially as their cost ensures they will be few in number.

What they are afraid of, he said, are sea mines, aerial drones, and tactical missile systems that are less glamorous, but during an invasion, far more deadly.

Post-invasion, they would fear even more a well-trained reserve force armed with "portable rockets, remote-controlled bombs, even motorcycles," Lee said, weapons that are cheap, can be domestically mass-produced and require minimal maintenance. Operationally, such weapons are "light, mobile and, once again, lethal."

The second problem in turning Taiwan's reserves into an effective deterrent force is domestic politics.

Tsai has repeatedly declared her commitment to developing Taiwan's asymmetric capabilities, and many, like Lee, have proposed that these capabilities are well suited to the reserve force.

But change is slow as proposals wind their way through political channels. 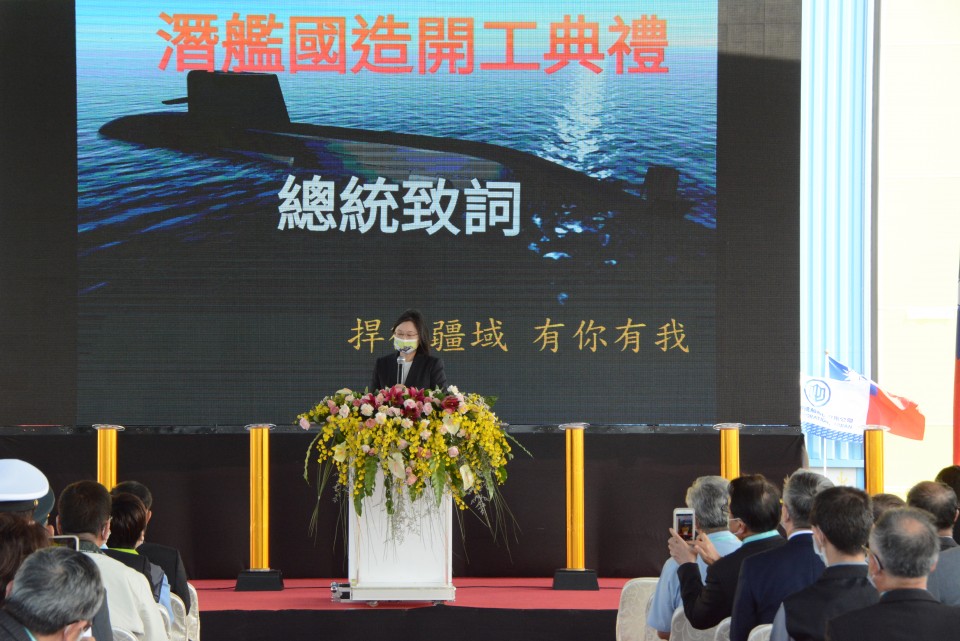 Taiwan President Tsai Ing-wen speaks at a launching ceremony of the construction of the prototype of the island's first indigenous defense submarine in Kaohsiung, southern Taiwan, on Nov. 24, 2020. (Kyodo)

Subject to approval, the Defense Ministry hopes to initiate reforms beginning in 2022 that would affect reserve organization, training and equipment, with a significant increase in funding and administrative staff.

But efforts to improve basic training have met with resistance.

Defense Minister Yen De-fa has said a return to conscription is not an option, however. Also in doubt may be expanded reserve training, with critics citing the difficulty of having millions leave their jobs and families each year to spend two weeks in uniform.

Foremost in the minds of Yen, Tsai and the rest of the DPP government is that both changes would affect younger Taiwanese, who represent their main political base.

"Some might call it political suicide to push through such changes," Chen said. Certainly the "opposition KMT would be happy to exploit such a move."

Yet given the Chinese threat, Chen believes that Tsai could persuade Taiwanese to bring back conscription.

"Of course, young people would not like it," he said.

Therein lies the dilemma for a government determined to effectively counter Chinese threats, namely, that DPP supporters will be called on to shoulder the lion's share of the burden.

As president of the U.S.-Taiwan Business Council Rupert Hammond-Chambers puts it, the problem of Taiwan's defense comes down to "the space between how young Taiwan citizens feel about the island's sovereignty and what they're prepared to do about it."