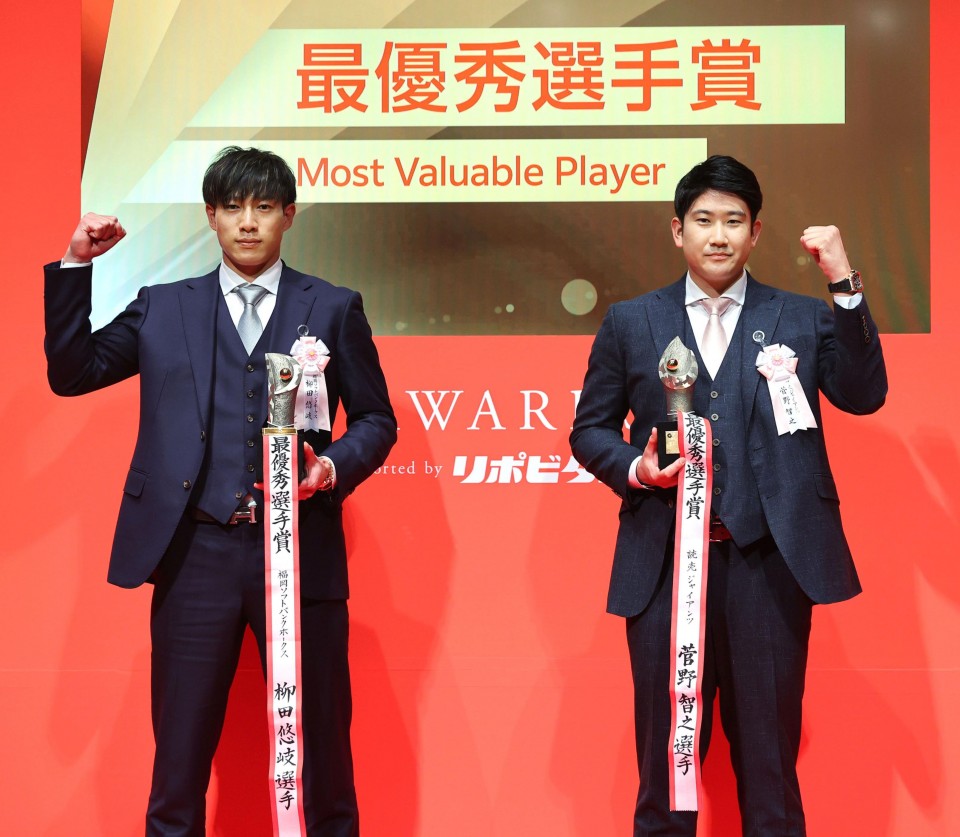 Sugano, who is now free to negotiate with major league clubs until Jan. 7 after being posted by the Giants, led both of Japan's leagues with 14 wins while losing just twice.

His 1.97 ERA was third in the CL, and he was second in strikeouts and third in innings pitched. The right-hander won his previous MVP award in 2014.

"We won the pennant last year, but I had a poor season, and I couldn't be happy about it. Instead, I became more motivated to turn things around and win some award," said Sugano, who opened his remarks by thanking those involved in pro baseball and the fans for their special efforts in a season that took place amid the coronavirus pandemic.

"This is the second time for me, but I think I was able to show people how far I've come since the first."

Yanagita, who last topped the PL MVP voting in 2015, led the PL in runs, hits and slugging percentage, and was among the league leaders in triples, home runs, RBIs, walks, on-base percentage and batting average.

Like Sugano, Yanagita was also coming off a poor 2019 season, when he missed much of the year through injury.

"I was hurt last year, and on top of that we missed out on the pennant, so it was really a lame season," Yanagita said.

"We had failed to win the pennant (for two years) so winning this was my No. 1 goal, since it's an award that usually only goes to pennant winners. I want to express my gratitude to my teammates."

"I'm really happy since this is an award I wanted to win since I turned pro," Morishita said. "I gained a lot of experience in my first year. I'm going to grapple with different issues during games next season as well and I want to keep growing and getting better."

"I started thinking about this in the second half, and I'm really happy as it's an award you can only win once," said Taira, who won a tight race, out-polling Rakuten Eagles shortstop Hiroto Kobukata 144-125.

"This season I pitched in situations when we absolutely couldn't allow a run. It made me feel reliable and I enjoyed that."

Nippon Professional Baseball's MVP, Rookie of the Year and Best Nine awards are voted on in a poll of baseball media members with five-plus years of experience.

Voters award players first-, second- and third-place votes, with players receiving five points for each first place vote, three for each second, and one for each third.