Nearly nine out of 10 Japanese companies plan to suspend their year-end and New Year parties to help reduce the risk of employees becoming infected with the coronavirus, a recent survey showed, in what would be another pandemic-induced disruption of the country's seasonal traditions.

Annual parties to look back on a passing year and then another to mark a new year, called "bonenkai" and "shinnenkai," respectively, are treated as important customs in Japan's corporate culture, making the period between December and January one of the most festive times in the country. 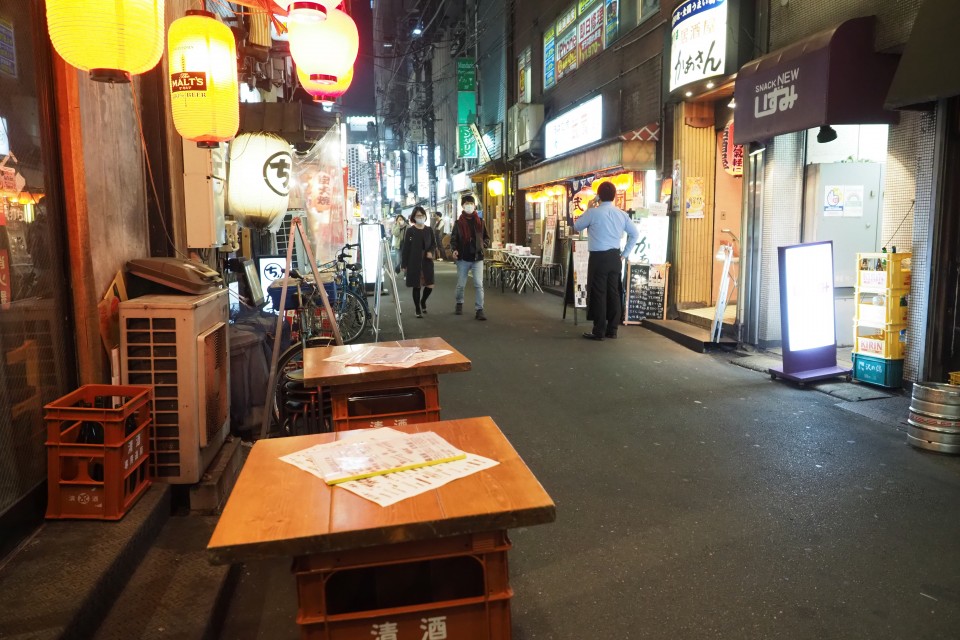 Few people are seen on a street lined with restaurants and bars near Shimbashi Station in Tokyo on Dec. 10, 2020, amid the coronavirus pandemic. (Kyodo)

However, this year, 87.8 percent of 10,059 firms across the country have not scheduled such eating and drinking functions, according to a survey conducted by Tokyo Shoko Research.

The figure collected via an online questionnaire from Nov. 9 through 16 came even before recent record increases of infection cases in many parts of the country. The daily national total has reached a record high of over 3,000 this month.

"The pandemic has taken away many of the traditions that make us feel the passing of seasons," said Takashi Moriyama, a 37-year-old insurance firm employee in Tokyo. "We missed out on cherry blossom viewing (in the spring), firework events (in the summer), and now bonenkai."

His company instructed all of its workers to refrain from holding seasonal events to mitigate the risk of infection, he added.

By area, the study found companies in prefectures with large populations and higher numbers of patients are more likely to suspend the annual parties. Hokkaido, Osaka and Tokyo were among areas with figures exceeding 90 percent.

In Akita and Saga, where daily infection cases have mostly stayed in the single digits, 65 and 68 percent of companies will forgo their annual events, respectively, the results showed.

In central Tokyo's Minato Ward, the drop in customers is evident.

"Seats normally fill up way in advance through reservations for bonenkai this time of the year," said a manager at a "yakitori" grilled skewered chicken restaurant, which had unusually few customers for an early December evening.

The owner of a pub in the ward said December sales are expected to dive nearly 80 percent from a year earlier. He said because of the situation, he cannot comply with the Tokyo metropolitan government's latest request to close before 10 p.m. as an infection prevention measure because it would cut even deeper into his profits.

Mitsuhiro Harada, a director in charge of the survey at Tokyo Shoko Research, said the loss of opportunities for consumption would impact not only the hospitality industry but the country's economy as a whole.

"Its effect on the economy already hit hard will likely be to such an extent that cannot be overlooked," he said.