The Ground Self-Defense Force test-flew an Osprey tilt-rotor transport aircraft for the first time on Friday at a camp east of Tokyo despite ongoing safety concerns.

In July, two V-22 Ospreys arrived at GSDF Camp Kisarazu in Chiba Prefecture, where the government eventually plans to base 17 of the U.S.-made planes through July 2025 until they are permanently deployed to an airport in southwestern Japan's Saga Prefecture as a counter to China's growing regional assertiveness. 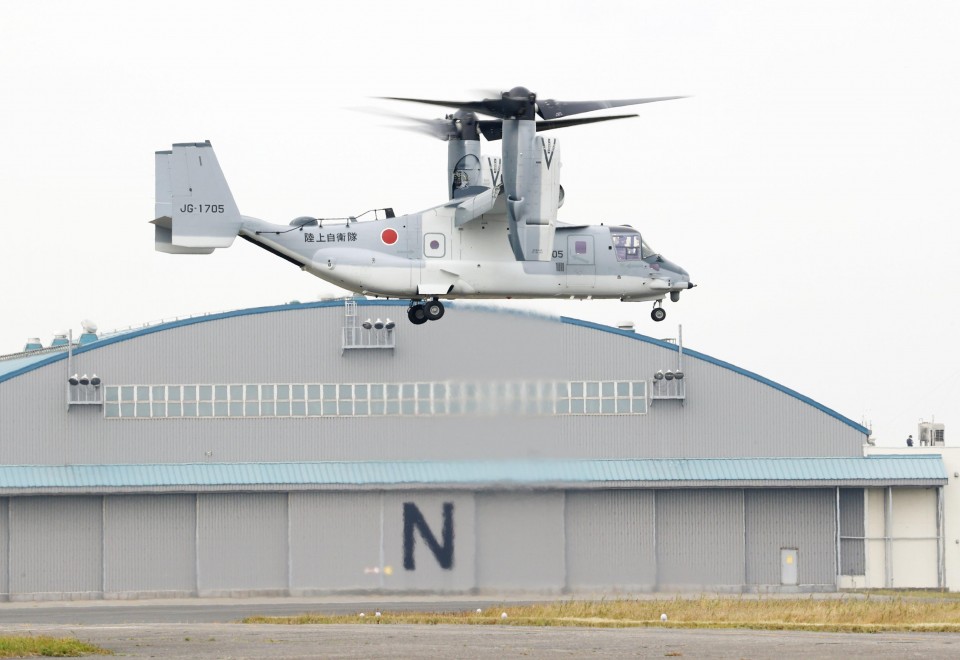 An Osprey tilt-rotor transport aircraft flies on Nov. 6, 2020, at a camp east of Tokyo. (Kyodo)

The two Ospreys will be flown over the camp for the next few days, before the area of operations is expanded beyond the base from next Tuesday, according to the Defense Ministry. Since their arrival, the two aircraft had been undergoing maintenance checks at the camp.

"It is good that we have successfully completed the hovering test," Col. Satoru Fuwa, who heads the unit in charge of Osprey operations, told reporters, adding the GSDF will make utmost efforts to secure safety and seek to improve flight capability.

Outside the Kisarazu camp, a group of residents opposed to the deployment of the Ospreys held a rally to protest the test flight.

Around 50 people held banners that read, "We don't need Ospreys in Japan's sky" and other messages, while recording the flight with cameras.

"If more Ospreys are deployed, they will fly everywhere and destroy our lives with their noise," said Yugo Yoshida, who heads the group.

A Kisarazu resident in her 60s said that Ospreys "make more noise than other planes. We are concerned about where they will fly."

Local opposition in Saga over the aircraft's blemished safety record is behind the Ospreys' temporary deployment at the Kisarazu camp.

The ministry and Saga Prefecture agreed in August 2018 to deploy the Ospreys at Saga airport for four years from the fiscal year through March 2019.

But the accord has yet to be realized as arrangements between the prefecture and the landowners of the planned deployment site, as well as local fishermen opposed to the plan, have yet to be finalized.

The Ospreys will be used to transport members of the GSDF's Amphibious Rapid Deployment Brigade in Nagasaki Prefecture, which borders Saga.

The brigade is intended to boost defense for far-flung islands in the country's southwest, including the Japan-administered Senkaku Islands in the East China Sea, which are claimed by China and Taiwan.

Ospreys, which take off and land like a helicopter but cruise like a plane, have a record of accidents and mishaps in Japan and abroad. In 2016, an MV-22, the U.S. Marine Corps variant of the Osprey, crash-landed in the southern Japan prefecture of Okinawa.

Since 2012, U.S. forces in Japan have deployed 24 MV-22s at U.S. Marine Corps Air Station Futenma in Okinawa, and five CV-22s at Yokota Air Base in the suburbs of Tokyo.

Japan to use Ospreys for overseas rescue operations