In a rare reversal of a decision on deportation in the absence of a court ruling, the Japanese government has granted a woman from South Asia who had unsuccessfully sought refugee status special permission to stay, her lawyer said.

The government issued a special permit effective Oct. 9 after the Osaka High Court, which had been hearing a suit filed by the 46-year-old woman, said it should be settled out of court. The woman, who declined to be named or her country of origin to be identified, dropped the lawsuit in July. 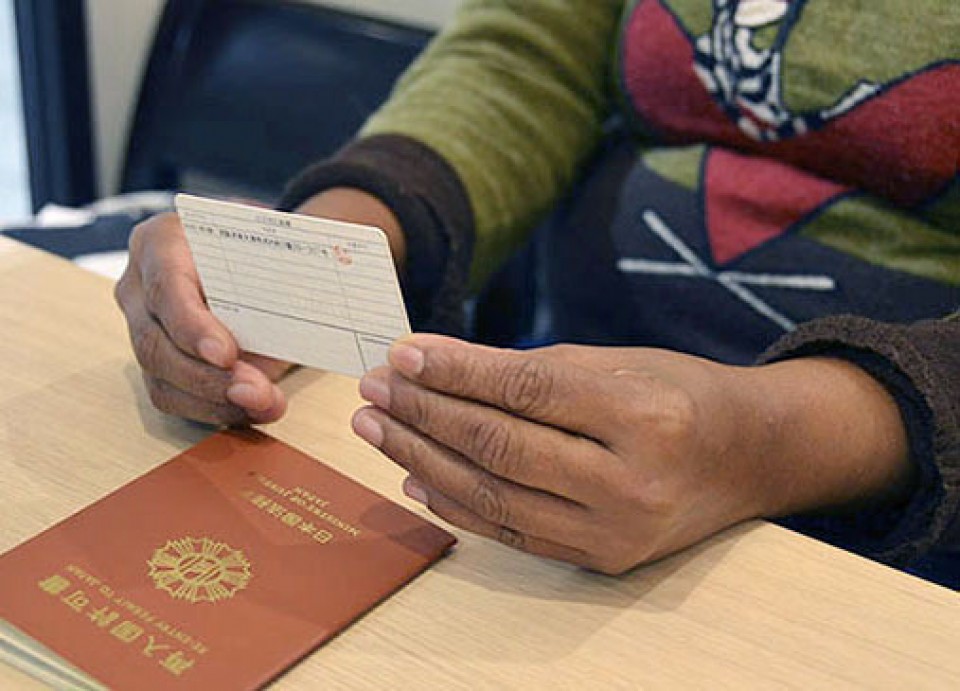 A woman from South Asia who received a special permit to stay in Japan is pictured holding her residence card. (Kyodo)

The woman entered Japan in 2007 because she feared for her safety due to political persecution, according to her suit. She was then presented with a deportation order in 2009 for staying in the country illegally.

According to the woman's lawyer, her receipt of a special permit to stay was also particularly unusual as she does not have family in Japan.

Special permission to stay in Japan is granted by the justice minister to people from overseas who are subject to deportation. The permit, which is valid for up to three years, allows them to renew it to extend their stay.

While there are no specific requirements, the Immigration Services Agency has often taken consideration of family matters, including marriage to Japanese nationals.

"I was surprised because I thought that the trial was the only way to end this. I am really glad," said the woman, who had appealed to the high court after the Osaka District Court dismissed her lawsuit in September last year.

However, the government rejected in September the woman's request for an administrative review of the denial of refugee status. Japan only provides refugee status to a handful of applicants each year.

Ikuya Nakao, the woman's lawyer, said, "It is highly uncommon for the judiciary and the (authorities) examining refugee applications to come to opposite conclusions based on the same evidence."

"It has been revealed that the system created to protect refugees has not been functioning," Nakao said.

An official at the agency said it is "possible" for a person to be granted a special permit to stay even without meeting the criteria for refugee status.

Last year, Japan granted refugee status to 44 people and allowed 37 people to reside without guaranteeing such status. The country received 10,375 applications in 2019.