Asia-Pacific countries including Japan, China and the 10 members of ASEAN signed the world's largest free trade deal on Sunday, wrapping up eight years of negotiations following the withdrawal of India.

The 15 signatories to the Regional Comprehensive Economic Partnership reached the agreement, aimed at cutting tariffs and establishing common rules in areas such as e-commerce and intellectual property, during a virtual leaders' summit. 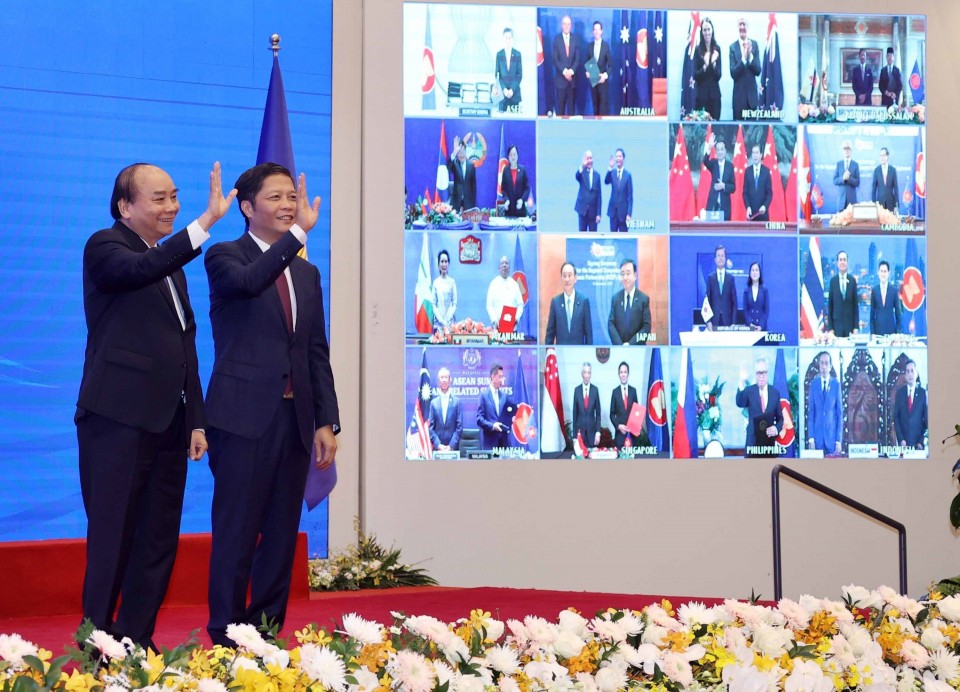 Vietnam's Prime Minister Nguyen Xuan Phuc (L) is pictured during the signing ceremony for the RCEP trade pact in Hanoi on Nov. 15, 2020. (VNA/Kyodo)

RCEP -- also including Australia, New Zealand and South Korea -- encompasses nearly a third of both the world's gross domestic product and its population.

"We believe that RCEP, being the world's largest free trade arrangement, represents an important step forward toward an ideal framework of global trade and investment rules," the leaders said in a joint statement issued after the meeting.

The deal "is critical for our region's response to the COVID-19 pandemic and will play an important role in building the region's resilience through an inclusive and sustainable post-pandemic economic recovery process," they said.

It will be Japan's first trade deal with both China, its largest trading partner, and South Korea as negotiations for a trilateral pact have yet to be concluded.

Speaking to reporters after signing the agreement, Japan's trade minister Hiroshi Kajiyama said the 15 countries were seeking to wrap up domestic procedures and put the pact into effect "as quickly as possible."

The deal will take effect after ratification by six members of the Association of Southeast Asian Nations and three of the other countries.

A special arrangement was made to facilitate India's return, exempting it from a rule barring new entrants to the framework for 18 months following the pact's entry into force. India said in November last year it will no longer take part in negotiations amid concerns that its trade deficit with China would grow.

Vietnamese Prime Minister Nguyen Xuan Phuc, who chaired the leaders' summit, promised to "always keep the door open for India" and "facilitate their participation as best as we can."

Kajiyama hailed the deal as creating new opportunities for Japanese manufacturers and farmers, saying it will "contribute greatly to increasing exports to Asia."

Consumers across the bloc will also benefit from "more competitive options to consider when they purchase their products," Singaporean trade minister Chan Chun Sing said in a press conference.

Negotiations for RCEP began in 2012, with China pushing it as an alternative to the U.S.-led Trans-Pacific Partnership. President Donald Trump later pulled the United States out of TPP talks, and a revised deal was signed among the remaining 11 countries including Japan.

Despite RCEP's historic size, it falls short of other major trade deals in the level of market access. The deal will eliminate tariffs on 91 percent of goods, less than the revised TPP or Japan's economic partnership agreement with the European Union.

Meanwhile, the other 14 countries will cut tariffs on 92 percent of Japanese industrial exports including automobile parts and steel products. 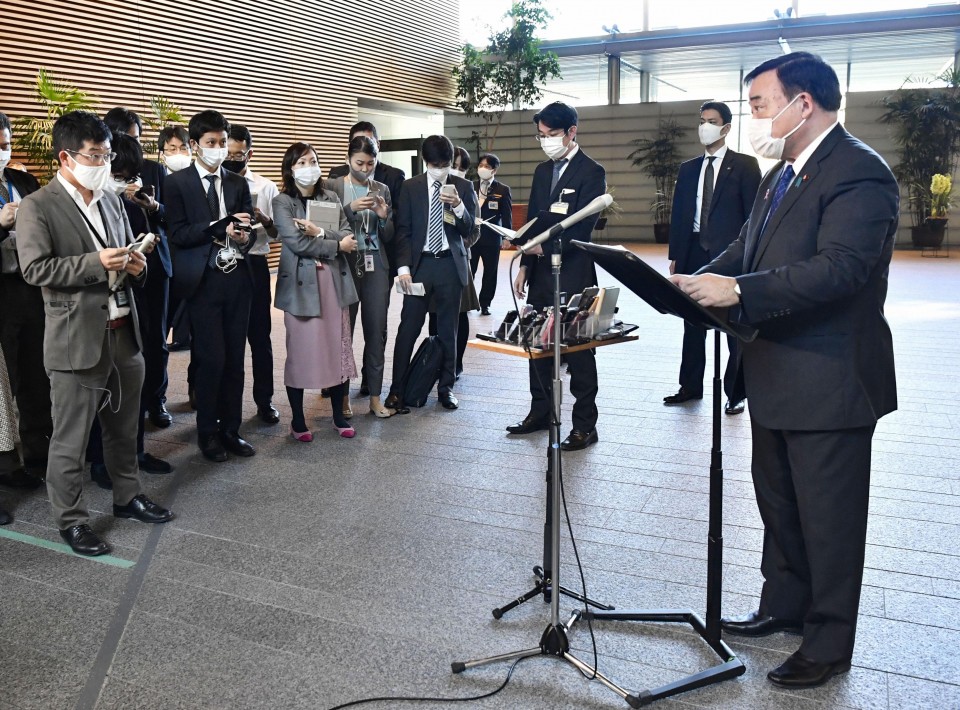 Japanese trade minister Hiroshi Kajiyama meets the press in Tokyo on Nov. 15, 2020, following an online summit of the 15 Asia-Pacific countries that constitute the Regional Comprehensive Economic Partnership signatories. The RCEP members, including Japan, China and the 10 members of ASEAN, signed the world's largest free trade deal during the virtual meeting, wrapping up eight years of negotiations aimed at cutting tariffs and establishing common rules in areas such as e-commerce and intellectual property. (Kyodo) ==Kyodo