Shodai suffered his first loss at the November Grand Sumo Tournament on Wednesday and appeared to further aggravate a left ankle injury, leaving his further participation in the 15-day meet in doubt.

The newly-promoted ozeki had been one of 10 undefeated men at the start of Day 4 at Tokyo's Ryogoku Kokugikan. The group, headlined by ozeki Takakeisho and komusubi Terunofuji, was trimmed to seven by the end of the day's bouts. 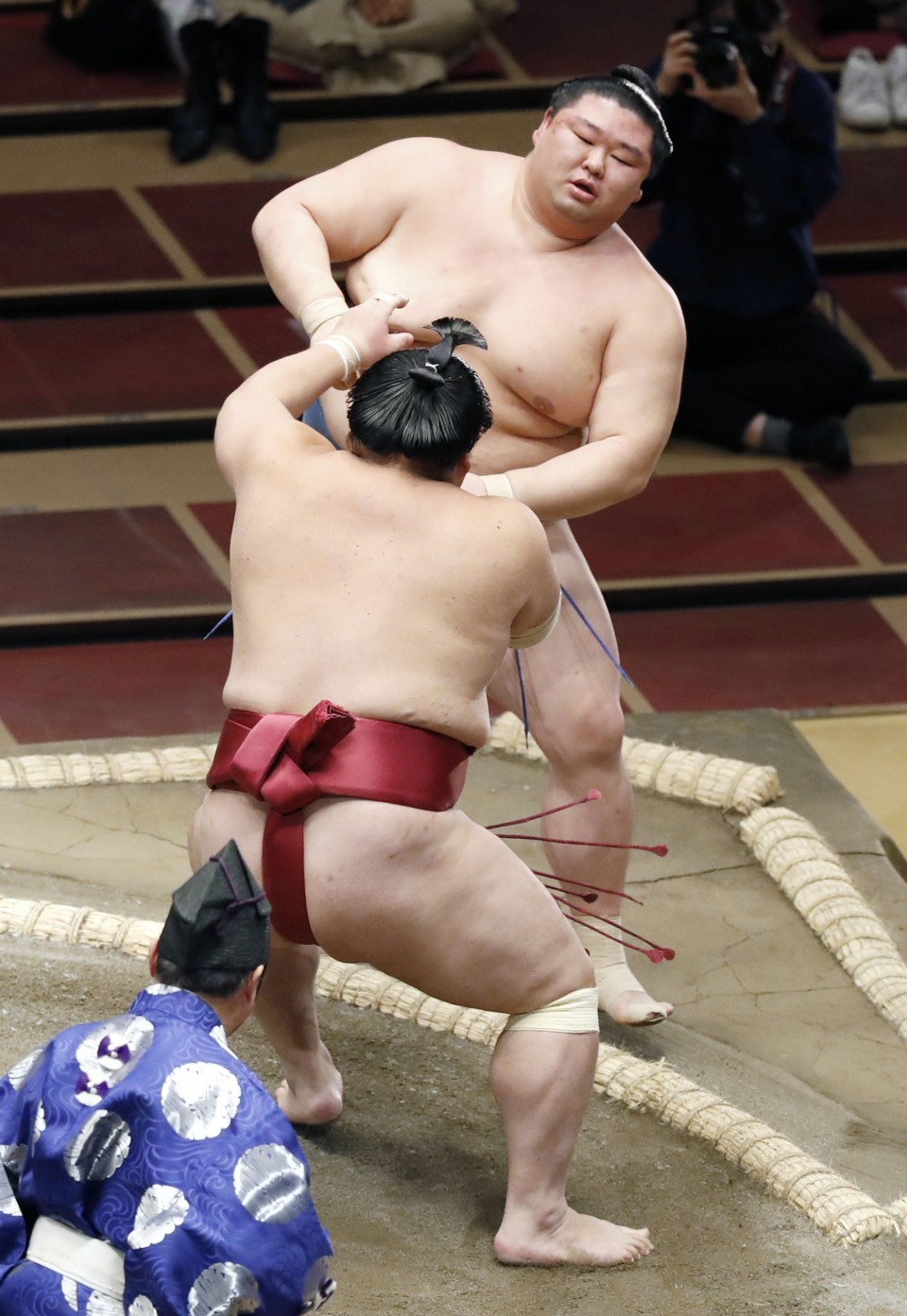 Rank and filer Daieisho pushes ozeki Shodai out of the ring on the fourth day of the November Grand Sumo Tournament at Tokyo's Ryogoku Kokugikan on Nov. 11, 2020. (Kyodo) ==Kyodo

Fighting with a taped left ankle, Shodai made a brief defense against No. 2 maegashira Daieisho (3-1) in the penultimate bout of the day before getting driven out of the ring and hopping off the dohyo.

"I just focused and kept up my attack. I wasn't thinking (about his ankle), I was just doing my best to produce my kind of sumo," said Daieisho, who improved to 6-4 against Shodai.

Shodai, who won his maiden makuuchi-division title at the September meet, landed awkwardly on his left foot when he came off the dohyo in his Day 3 bout against komusubi Takayasu.

In addition to the two grand champions, Hakuho and Kakuryu, ozeki Asanoyama has also pulled out of the meet with an injury.

Takakeisho dispatched winless No. 2 Onosho to retain his unblemished record. Onosho got the better of their initial clash and looked to be in control until Takakeisho thrusted his away around the rank-and-filer and pushed him off the raised ring.

Terunofuji earned his fourth straight win while handing No. 3 Okinoumi his first loss.

The Mongolian former ozeki seized a left-handed inside belt hold after the pair clashed heads and withstood an overarm throw attempt before muscling Okinoumi over the straw.

No. 4 Hokutofuji also remains unbeaten after going into overdrive to beat Takayasu (1-3). The No. 4 maegashira came out of the gates charging, driving Takayasu to one edge of the ring before pulling him back and shoving the komusubi out the opposite side.

Takanosho (2-2) captured his second win after beating No. 1 Wakatakakage (1-3) in their first top-division meeting. Wakatakakage dodged the new sekiwake's initial thrust and tried to shove him out from behind, but Takanosho recovered and shoved his challenger out.

No. 1 Kiribayama continued to flummox Mitakeumi, defeating the sekiwake for the third time in as many match-ups for his first win of the meet. The pair locked up briefly before Kiribayama (1-3) leaped to the side while forcing down Mitakeumi (2-2).

Among the rank-and-file wrestlers, No. 7 Endo, No. 9 Kotoeko, No. 14 Chiyonokuni and No. 17 Shimanoumi all collected their fourth straight wins to retain a share of the lead.