Noting that "Japan has been always at the front line" in the fight against climate change, Guterres said in an exclusive online interview with Kyodo News, "I am totally reassured about Japanese performance in relation to climate action." 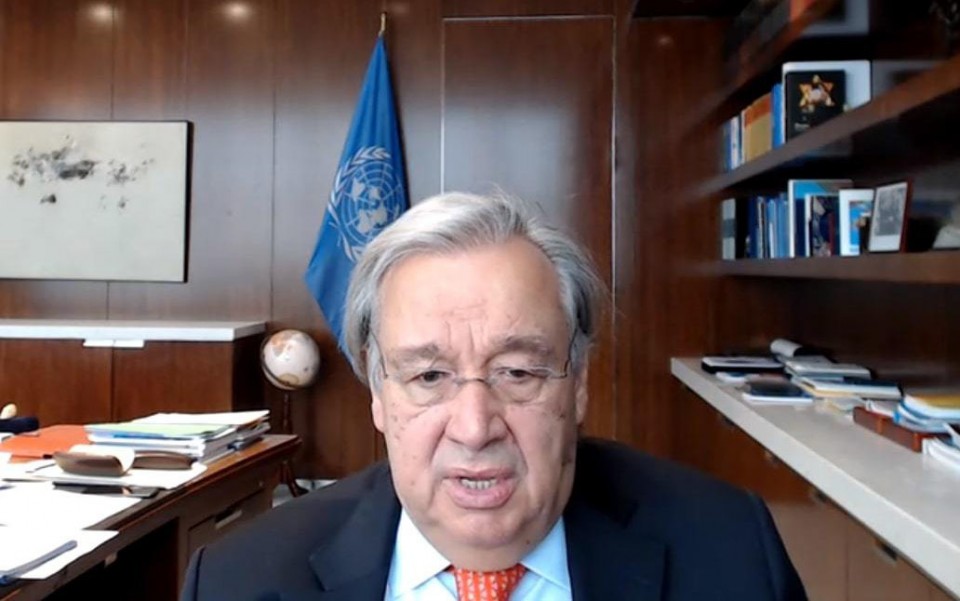 U.N. Secretary General Antonio Guterres speaks in an exclusive online interview with Kyodo News on Nov. 25, 2020, as seen in this screenshot image. (Kyodo)

In March, Japan decided to retain its target to reduce carbon dioxide emissions by 26 percent by fiscal 2030 as compared to the 2013 level, drawing criticism at home and abroad for failing to be ambitious.

Signatories of the Paris Agreement on curbing greenhouse gas emissions are supposed to set their respective goals and update them every five years, preferably with upward revisions.

During a policy speech in parliament in October, Suga announced Japan's commitment to net zero emissions by 2050. Referring to the latest goal, the U.N. chief said, "We have seen (South) Korea following...I believe the new U.S. administration will also follow the Japanese measure." 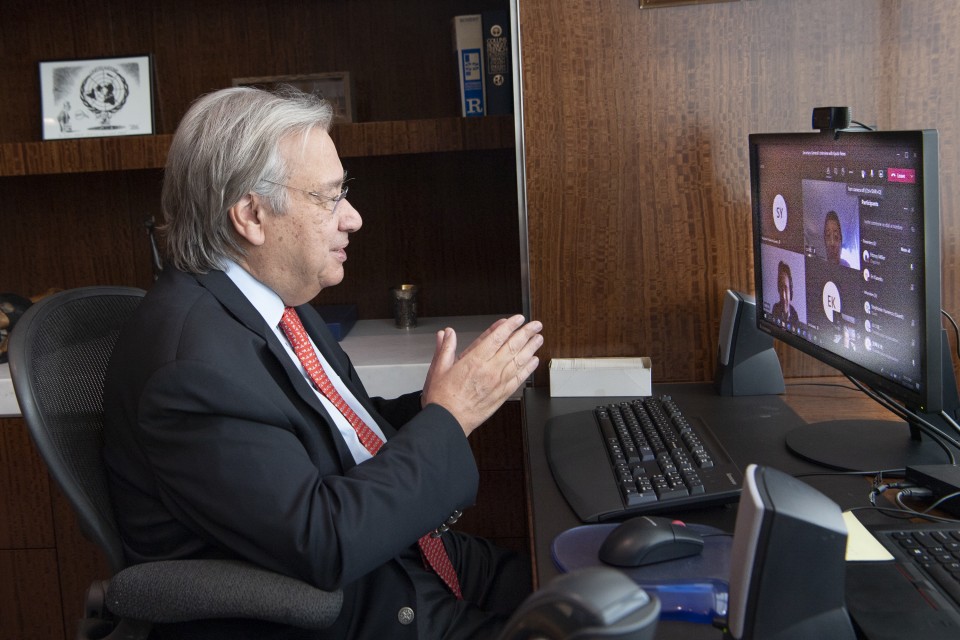 He hailed Tokyo's move as an "essential contribution" to "build a global coalition for net zero" at a U.N. conference on climate change next year.

"I am hopeful and convinced that Japan will also present before the COP26 its set of nationally determined contributions in line with the objective of a very meaningful reduction of emissions to 2030 and the net zero objective for 2050," Guterres said, referring to the 26th U.N. Climate Change Conference of the Parties to be held in November 2021.

While expressing hope that Japanese technology will reduce the country's dependency on fossil fuels for energy, he also suggested that Japan can play a role in helping developing countries in efforts to brace for the accelerating effects of climate change.

"We count a lot on Japan not only to lead the process of reduction of emissions, but also to lead the support to the developing countries in creating the conditions for them to resist better, to be more resilient in relation to the already inevitable impacts of climate change in the near future," he said.

On a U.N. treaty banning nuclear weapons that is set to take effect on Jan. 22, the U.N. head said, "This treaty has a very important symbolic value...a very strong commitment to move in the direction of a world free of nuclear weapons."

The Treaty on the Prohibition of Nuclear Weapons will become the first international pact outlawing the development, testing, possession and use of nuclear weapons.

But none of the world's nuclear-power states have joined the treaty, while Japan, the only country to have suffered the devastation of atomic bombings, has remained on the sidelines in consideration of its security ties with the United States.

Asked whether Japan should attend a meeting of the nuclear ban pact as an observer, Guterres only said that Japan has a consistent approach toward disarmament and against nuclear weapons.

"I hope that that consistent approach will be translated in the future actions of the Japanese government," he said.

As U.S. President-elect Joe Biden vows to make a clear departure from incumbent Donald Trump's "America First" policy, Guterres said, "I am a true believer that the United States (is) an irreplaceable partner in international cooperation, and in multilateralism."