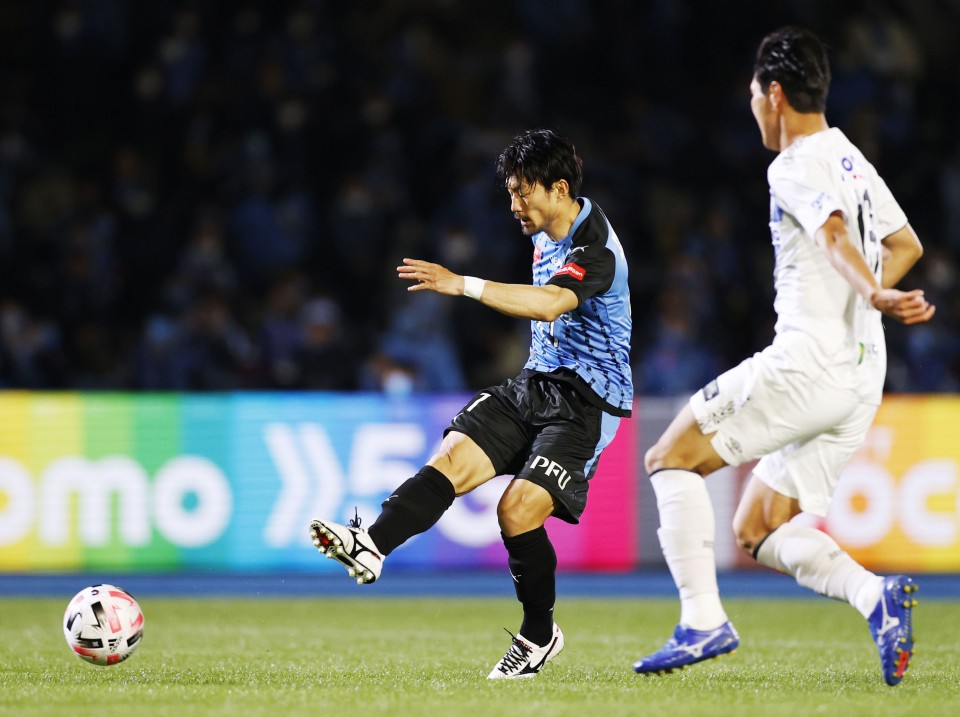 Akihiro Ienaga (L) scores Kawasaki Frontale's third goal during the second half of a J-League football match against Gamba Osaka on Nov. 25, 2020, at Todoroki Stadium in Kawasaki, near Tokyo. (Kyodo) ==Kyodo

Rising star Kaoru Mitoma provided a pair of assists, while striker Leandro Damiao scored one goal and helped set up another as Toru Oniki's side claimed their third J1 championship since 2017.

By winning the race to the title with four rounds remaining, Kawasaki have secured the silverware faster than any club since the J1 adopted a 34-game schedule in 2005.

They have also ensured one of the club's greats, midfielder Kengo Nakamura, will retire as a champion at the end of this season.

Gamba arrived at Kawasaki's Todoroki Stadium with the near-impossible task of closing a 14-point gap behind the league leaders, but had their backs to the wall from the opening minutes.

Kawasaki were typically quick to turn defense into attack and took the lead in the 22nd minute when Damiao beat the offside trap to volley home a ball into the box from Kyohei Noborizato.

The Brazilian forward looked to double the lead on a breakaway in the 44th minute but was stopped by Gamba keeper Masaaki Higashiguchi. Kawasaki struck from the ensuing set piece, however, with Ienaga volleying into the net after Damiao headed Ao Tanaka's corner kick into his path.

Ienaga bagged his second in the 49th minute following a storming run through the middle by Mitoma, who laid off a pass to the 2018 J-League MVP at the right of the box.

The 34-year-old attacker brought up his hat trick from a counterattack in the 73rd minute with another assist from Mitoma, who played a cross for Ienaga to tap in from the middle of the area.

"I wish this day would never end. That's how happy I feel," a jubilant Ienaga said.

In a season of unprecedented challenges caused by the coronavirus pandemic, Kawasaki have kept a stranglehold on first place since climbing to the top of the standings on July 11.

They are guaranteed to finish the season with a new points record under the 34-game format, having already surpassed the old mark of 74 by beating Gamba. 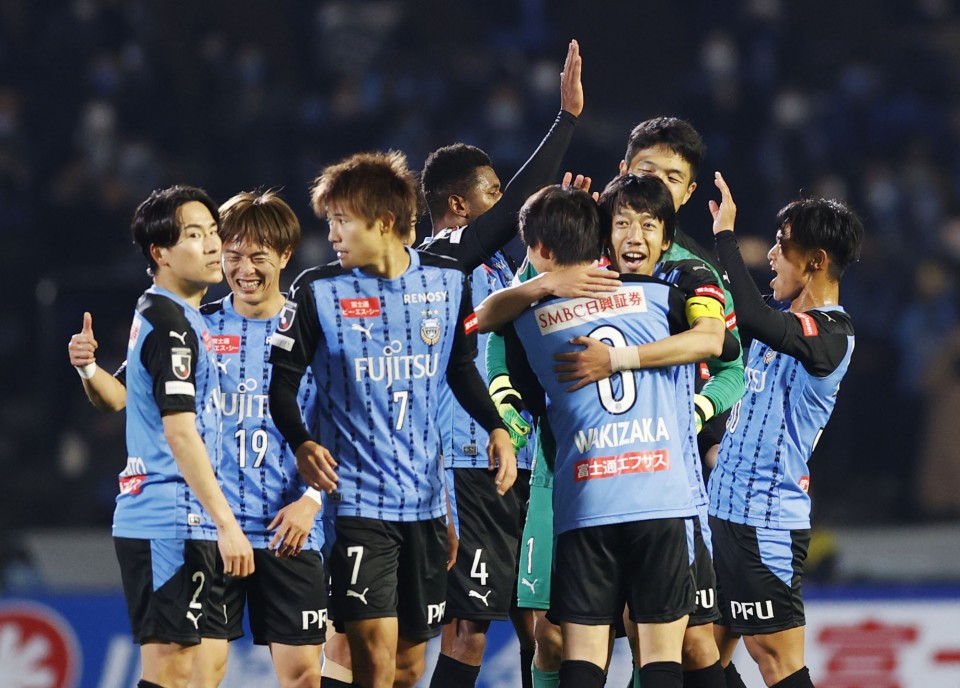 While other clubs have struggled with a condensed schedule following a roughly four-month interruption prompted by the pandemic, Oniki's squad of seasoned veterans and talented youngsters have thrived under the pressure.

Oniki has credited experienced campaigners such as forward Yu Kobayashi and the 40-year-old Nakamura with instilling the squad with an uncompromising attitude.

Nakamura said that lessons he and his teammates learned during Kawasaki's maiden title season in 2017 were integral to winning again the following year and in the current virus-interrupted season.

"We developed a mental toughness that became a foundation of our club and is part of the current team," the former Japan international said.

Frontale could have clinched the championship this past weekend had they beaten Oita Trinita away, or had Gamba lost or drawn their match against Urawa Reds. But a 1-0 win by Oita, and a 2-1 comeback victory by Gamba at Saitama Stadium delayed their celebrations.

"It was a little frustrating to lose last round to Oita. But I'm very happy to be able to win the title today at home in front of our fans. It feels really good to do it among the people who supported us," Oniki said.