Shodai survived a close call against komusubi Takayasu at the November Grand Sumo Tournament on Tuesday to stay undefeated alongside fellow ozeki Takakeisho at the top of the leaderboard.

The pair occupying sumo's second-highest rank saw their competition dwindle on Day 3 of the 15-day meet at Tokyo's Ryogoku Kokugikan after their ozeki colleague Asanoyama pulled out with a shoulder injury prior to the start of the day's top-level action.

Shodai, who won his maiden makuuchi title in September, ran into trouble trying to dispatch Takayasu in the final bout of the day, but emerged victorious when the former ozeki fell out first while attempting a last-ditch shove.

The two elite wrestlers had been evenly matched over their 17 previous meetings, with Shodai boasting a one-bout advantage over Takayasu, who dropped to 1-2 in his quest to regain ozeki status. 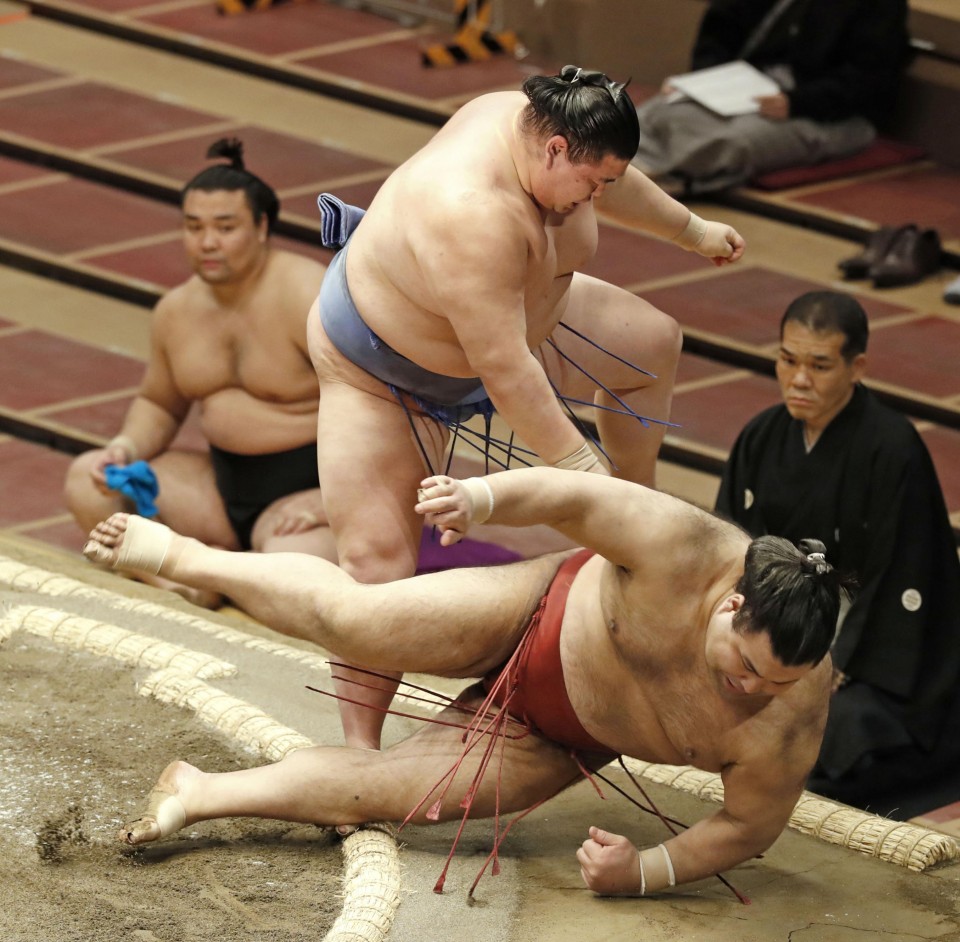 Takakeisho also overcame a struggle in his match with No. 1 maegashira Kiribayama (0-3).

The ascendant rank-and-filer tried to neutralize the ozeki's thrusting attack by circling around and locking him up, but Takakeisho turned the tables, twisting Kiribayama over the edge before falling out.

Asanoyama pulled out of the meet with a right shoulder injury suffered in his opening bout. He joins Hakuho and Kakuryu on the sidelines, following the injury withdrawals of both grand champions before the 15-day tournament.

Asanoyama had been handed his first loss on Day 2 by komusubi Terunofuji, who beat the ozeki for the third straight time. No. 1 Wakatakakage, Asanoyama's scheduled opponent on Day 3, claimed his first win by forfeit.

In other bouts, sekiwake Mitakeumi (2-1) bounced back from his first loss on Day 2 with a push-out win over No. 3 Kagayaki (0-3). Mitakeumi seized the advantage with his initial blast and plowed Kagayaki out of the ring with a steady charge.

Sekiwake Takanosho fell to his second loss at the hands of No. 3 Okinoumi, who clinched his third straight win.

Okinoumi held out as Takanosho (1-2) took him back to edge with a high-handed shove to the throat, then circled away and swung his opponent down by the shoulders.

Unbeaten Terunofuji, looking to win his second top-division title of the year, pushed out winless Onosho and claimed his first win over the No. 2 maegashira in three match-ups.

Onosho pushed the komusubi back with a strong initial thrust, but moved in too close and allowed Terunofuji to wrap him up and drill him over the straw bales.

Among the rank-and-file, makuuchi debutant Akua quickly slapped down juryo grappler Midorifuji to capture his first victory in the top division.