Pfizer to apply for U.S. authorization on COVID vaccine "within days"

Pharmaceutical giant Pfizer Inc. said Wednesday that it plans to apply for emergency use authorization in the United States for a potential COVID-19 vaccine "within days," as it has shown the vaccine to be effective in clinical study.

The two-dose vaccine, jointly developed with German firm BioNTech SE, met "all of the study's primary efficacy endpoints," the companies said in their press release, noting that an analysis indicated the vaccine was 95 percent effective in preventing the disease caused by the novel coronavirus. 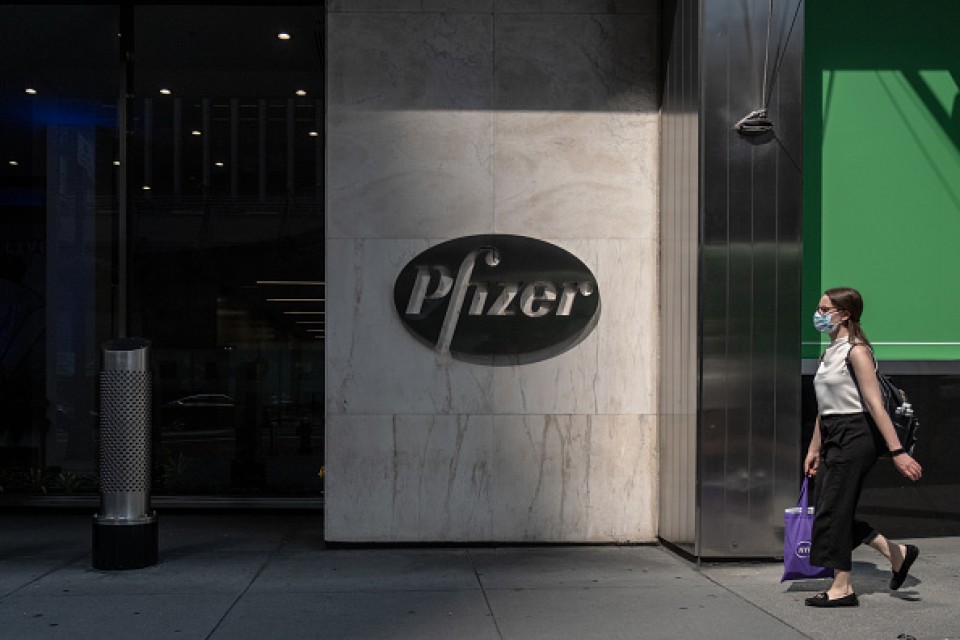 A pedestrian wearing a protective mask walks past Pfizer Inc. headquarters on July 22, 2020 in New York City.(PHOTO NOT FOR SALE)(Getty/Kyodo)

Last week, the companies released an interim analysis from the phase-three study, which began in late July and has enrolled around 44,000 participants. It showed that the vaccine was more than 90 percent effective.

In the latest analysis, the companies looked into the confirmed COVID-19 cases of 170 study participants, eight of whom had been vaccinated while 162 had received dummy shots.

Ten severe cases of COVID-19 have been observed in the trial, with one of the cases occurring in the vaccinated group and nine in the placebo group.

"The safety milestone required by the U.S. Food and Drug Administration for Emergency Use Authorization has been achieved," Pfizer and BioNTech said.

The companies said they "plan to submit a request within days" for an emergency use authorization based on the totality of safety and efficacy data collected to date, and plan to share the data with other regulatory agencies around the world.

But the vaccine has to be stored at a temperature of minus 70 C or lower, possibly creating difficulty in its distribution process.

Pfizer said it is confident in its existing cold-chain infrastructure to distribute the vaccine globally.

Pfizer and BioNTech have also developed thermal shippers utilizing dry ice to maintain temperature conditions at around minus 70 C, with the packaging able to serve as temporary storage units for 15 days if refilled with dry ice, according to their press release.

Moderna Inc., another U.S. company, announced Monday that its experimental vaccine was 94.5 percent effective in preventing COVID-19. Its vaccine is reportedly said to be easier to distribute as it can be stored for one month at standard refrigerator temperatures.

The series of successful findings are raising hopes toward a breakthrough in the nearly year-long global fight against the coronavirus pandemic, which has left more than 1.3 million people dead, according to a tally by Johns Hopkins University.