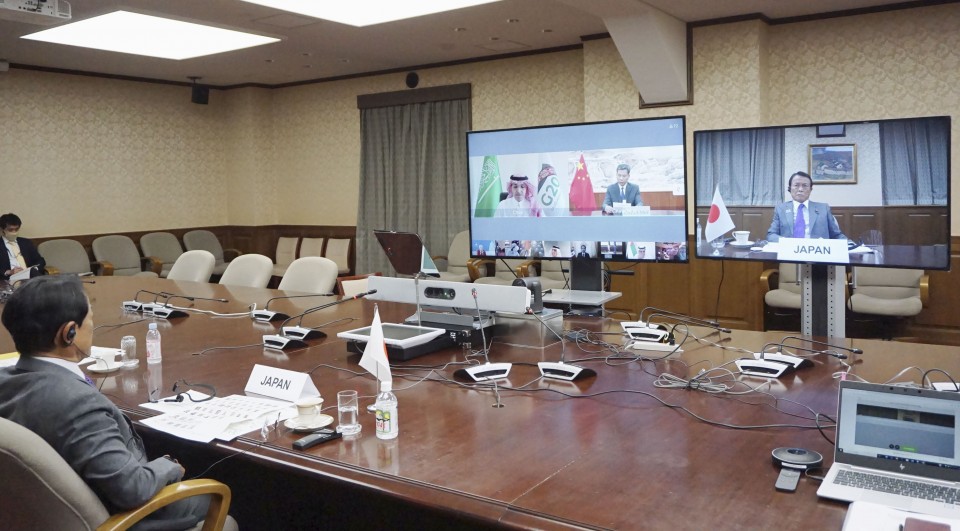 Supplied photo shows a teleconference for financial chiefs and central bank governors from the Group of 20. (Photo courtesy of the Ministry of Finance)(Kyodo)

TOKYO - Finance chiefs of the Group of 20 major economies agreed Friday to reduce the debts owed by developing countries as a further step to support them in fighting the coronavirus pandemic.

The G-20, including the United States, China, Japan and European nations, had discussed relief measures that go beyond the debt service suspension, launched in May to help developing nations secure funds to take measures to curb the spread of the virus and ease its economic fallout.

The newly agreed framework is designed "to facilitate timely and orderly debt treatment" for countries already eligible for the existing debt payment freeze, the G-20 finance ministers and central bank governors said in a joint statement released after their virtual meeting.

They also said the treatment requires "broad creditors' participation including the private sector."

The agreement comes as some G-20 members including China, the world's largest official creditor, have been seen as reluctant to commit to the additional step.

The United States, Japan and European countries had claimed such members would undermine the G-20's attempt by classifying their state-owned financial institutions as commercial lenders to exclude them from the initiative.

"It's historical that the G-20 countries, including non-members of the Paris Club (traditional creditor nations), agreed on the issue of this kind," Japanese Finance Minister Taro Aso told a press conference after the online talks.

Both private and public creditors should make similar commitments at least, said Aso, who added that China agreeing to the framework is "the biggest achievement" of the meeting.

The outcome of the talks will be reported to a virtual G-20 summit scheduled for Nov. 21 and 22.