Speaking at a press conference in Tokyo held ahead of his 55th birthday on Monday, the crown prince suggested that the money issue requires more visible efforts by the Komuros, but said he accepts the couple are committed to tying the knot. 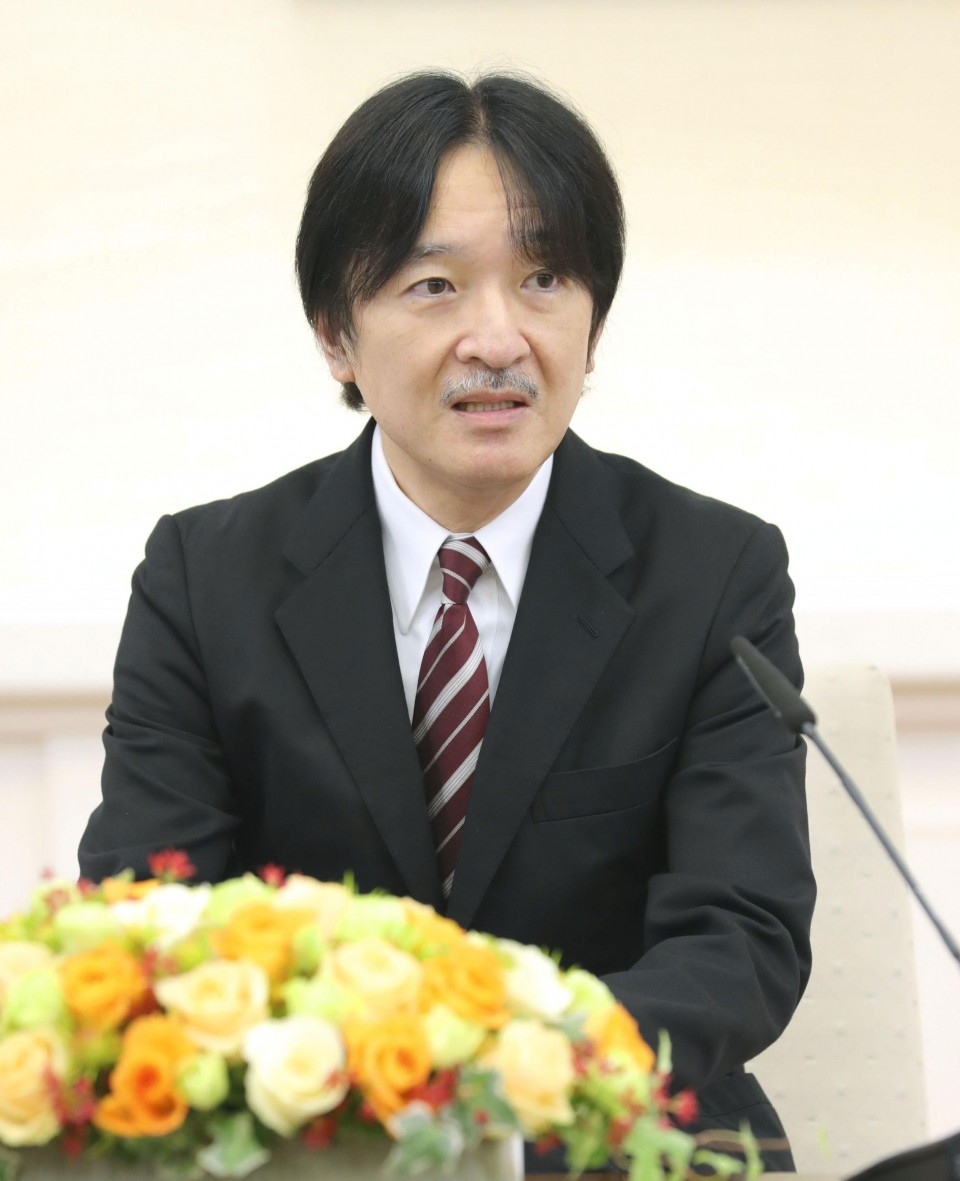 "I mean, I approve of them getting married. The Constitution says marriage shall be based only on the mutual consent of both sexes. If that is what they really want, then I think that is something I need to respect as a parent," said the crown prince, who is first in line to the Chrysanthemum Throne.

In a statement issued earlier this month, Princess Mako, 29, expressed strong resolve to go ahead with the marriage, which was originally scheduled in 2018 but pushed back following reports of a dispute between Komuro's mother and her former fiance over money, including educational expenses for her son that the man shouldered.

The crown prince told reporters that no date has been set for his daughter's wedding while maintaining his view that the couple have not won the support of the Japanese public.

"From my point of view, I think they are not in a situation where many people are convinced and pleased (about their marriage)," he said, adding that he believes Princess Mako is also aware she has not gained sufficient public support for the wedding.

In a 2018 press conference held ahead of his birthday, the crown prince said, "If (their marriage) cannot be celebrated by many people, we cannot hold" a betrothal ceremony, known as "Nosai no Gi."

He suggested that the Komuros have tried to resolve the issue to some extent, but said it is necessary for the efforts to be "visible." He also urged the couple to offer a public explanation of developments regarding their marriage when plans to tie the knot are set.

Princess Mako and Komuro, 29, announced their plan to get engaged in September 2017. The agency said their wedding would take place in November 2018, but in February that year announced that their marriage would be put off until 2020.

While the crown prince said in the latest news conference that he respects his daughter's desire, he said that marriage and an engagement are two different things. 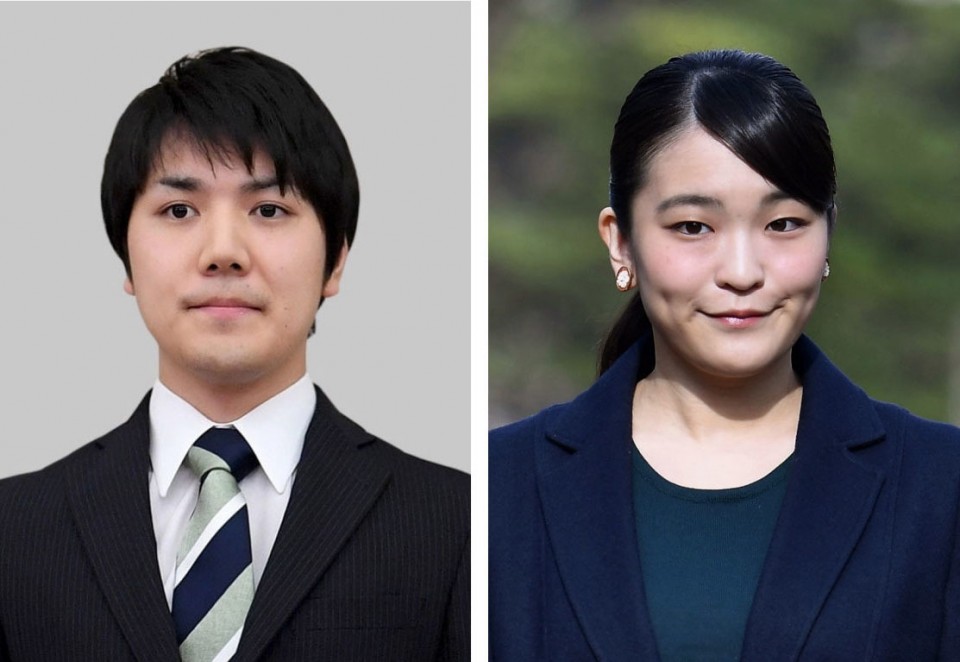 Combined photo shows Japanese Princess Mako (R), Emperor Akihito's eldest granddaughter, and her boyfriend Kei Komuro. Komuro said in a statement on Jan. 22, 2019, that financial issues believed to be behind the postponement of the couple's marriage have already been resolved. (Kyodo) ==Kyodo

Under Japanese law, female members of the imperial family must abandon their royal status upon marriage to a commoner. They usually receive a lump sum payment from the state to maintain the dignity of their position after leaving the imperial household.

Since the payment comes from public coffers, the princess' marriage plan has stirred widespread debate.

"Engagement is considered as a bond between families, so it is different from marriage that is based on the choice of individuals," said Hideya Kawanishi, an associate professor in Nagoya University's Graduate School.

The latest comments by the crown prince indicate that he is conflicted between respecting the free will of his daughter and protecting the tradition of the imperial family, Kawanishi said.

In a statement earlier this month, Princess Mako said the couple consider marriage to be a "necessary choice" for them, but added that they "acknowledge that some people are negative" about it.

Since August 2018, Komuro has been studying at Fordham University's law school in New York with a plan to take the bar exam in the United States after finishing his studies at the university next year.

Crown Prince Fumihito was formally declared first in line to the throne in a traditional ceremony held on Nov. 8, following a seven-month postponement due to the novel coronavirus pandemic.

He said he was "relieved" that the event had taken place, concluding a series of imperial succession rituals held since his elder brother Emperor Naruhito, 60, ascended to the throne in May last year following the abdication of their 86-year-old father former Emperor Akihito -- the first Japanese monarch to step down in over 200 years.

During the global health crisis, the crown prince has been performing his duties online and has received virtual briefings from experts and others on the virus. He said he has been spending more time at home with his wife Crown Princess Kiko and three children -- Princess Mako, Princess Kako, 25, and Prince Hisahito, 14.

Asked for his opinion about the imperial family's role in a time of such uncertainty, he said, "It is to understand as much as possible about people who are in very difficult situations right now as well as their supporters, and sympathize with them." 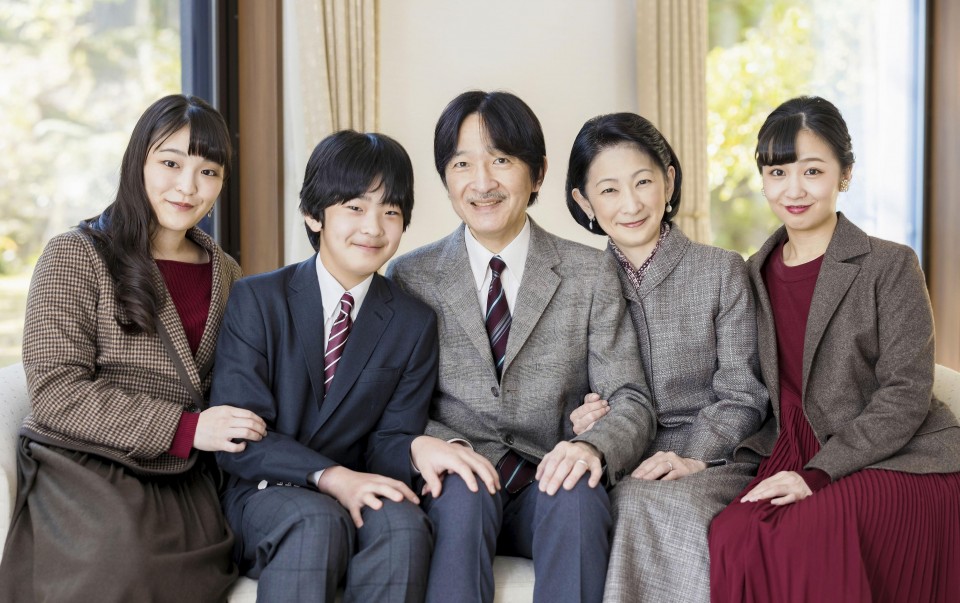 Crown Prince Fumihito (C) and his family in Tokyo on Nov. 14, 2020. (Photo courtesy of the Imperial Household Agency)(No trimming allowed)(Kyodo)