Baseball: Angels' Shohei Ohtani opens up on most difficult season

Two years after Tommy John surgery on his right elbow, the Los Angeles Angels' Shohei Ohtani is entering what could be described as his winter of discontent.

Instead of returning as a two-way impact player in 2020, Ohtani suffered a shoulder strain and pitched in just two games. He went 0-1 with a 37.80 ERA while flailing as a hitter. 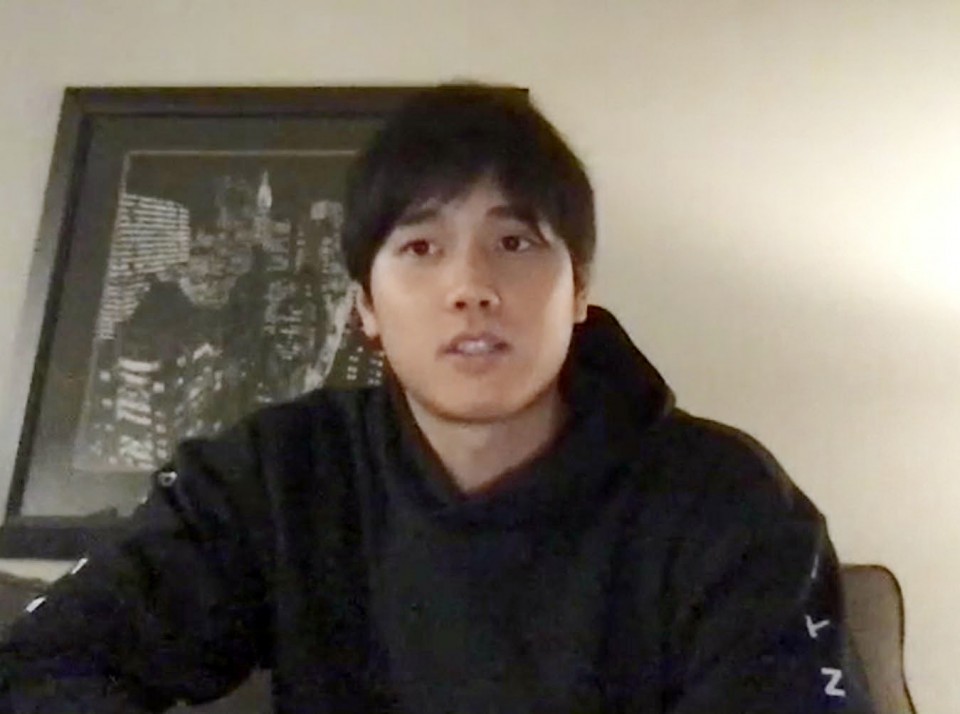 In an online interview with Kyodo News, Ohtani spoke about his most difficult year in baseball, his life during the novel coronavirus pandemic, playing in empty stadiums, Yu Darvish, Tommy John surgery and the appeal of playing in the United States.

Q: You only pitched three times in the summer prior to the season. Did you need more adjustment time?

A: I would have been grateful to get (more preseason work), but that just wasn't the situation we were in. It felt like we just needed to go out and get it done.

My intention was to do what I could (in the pandemic). Even when we restricted our activities, I was able to practice. During that time, there wasn't anything I was staying away from (physically), but I just wasn't able to make enough adjustments. Maybe I didn't get enough practice. It felt like that.

Q: Was it hard to get your feel for pitching back after surgery?

A: I think it does feel quite different, although there are some things I've forgotten for sure. I'll think I want to do something a certain way, but sometimes I can't.

Q: Is it different from how you imagined it?

A: I heard a lot of different things, but in the end, you can really only know about your own body. I was able to talk to others who have rehabbed from it and have been able to get reports on different things I could do.

But it's not like everything about it has been bad. There's a possibility it could turn out well, depending on what I do going forward.

After surgery, it got better and better. At the time, I thought that was good and I was fine with that. But in retrospect, I can't help but feel I'm different. 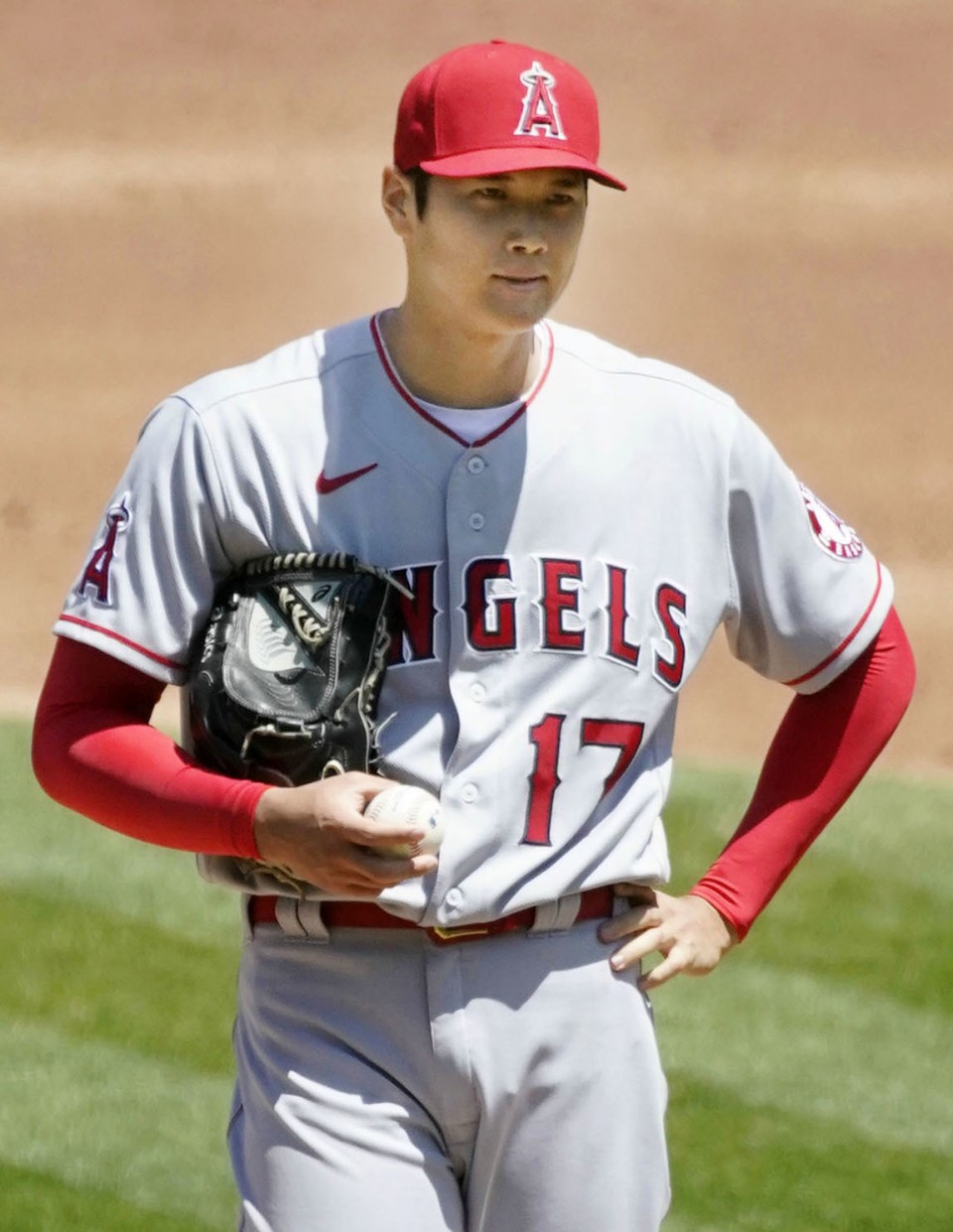 Los Angeles Angels two-way player Shohei Ohtani is pictured during a game against the Oakland Athletics on July 26, 2020, in Oakland, California. In his return to the mound from Tommy John surgery, Ohtani was pulled without recording an out after facing six batters in a five-run first inning. (Kyodo) ==Kyodo

Q: In August, you went hitless in a career-worst 21 straight plate appearances. What was that like?

A: My mechanics were off. It felt like the best I could do was simply get a hit. I was happy to get one, but even when I did, there were few times when everything clicked. Home runs rarely feel like flukes, but that's how they felt. Something felt wrong.

Q: Were there plate appearances where you felt satisfied?

A: Not many. There was one home run (on Sept. 23). That was about it. It felt like I produced a good swing for the first time in some 100 plate appearances.

Q: What was it like warming the bench at the season's end?

A: More than thinking how (the team) couldn't use me or how frustrating it was, the hardest part was thinking I couldn't produce. If I could, I would compile better numbers, get more playing time and wouldn't feel useless. I was frustrated I couldn't get it done, and that was the hardest.

Q: You called last season the most disappointing ever. What about this year?

A: That's right. (Until 2019) I could more or less do the things I wanted to do. I'd pretty much never experienced the feeling of wanting to do something but being completely unable to do it.

Take the pitching rehab. I felt it was going to be difficult. First, I would do something I wanted and see how it went. I wanted to know whether it was good or bad. If you don't know, you can't process it.

Q: How was playing behind closed doors?

A: Fans being there or not makes a big difference to players. The atmosphere changes depending on whether or not there is cheering.

Q: What was the impact of the pandemic on your personal life?

A: Of course, there were times when I couldn't go out, but I'm not the person who goes out anyway, so that was no bother, really. When our movement was restricted, I was still able to practice, so I didn't have much trouble.

Q: Did you pay attention to gargling and handwashing?

A: Of course. At the stadium, we couldn't eat at our lockers and so on. Things were different from a usual year. 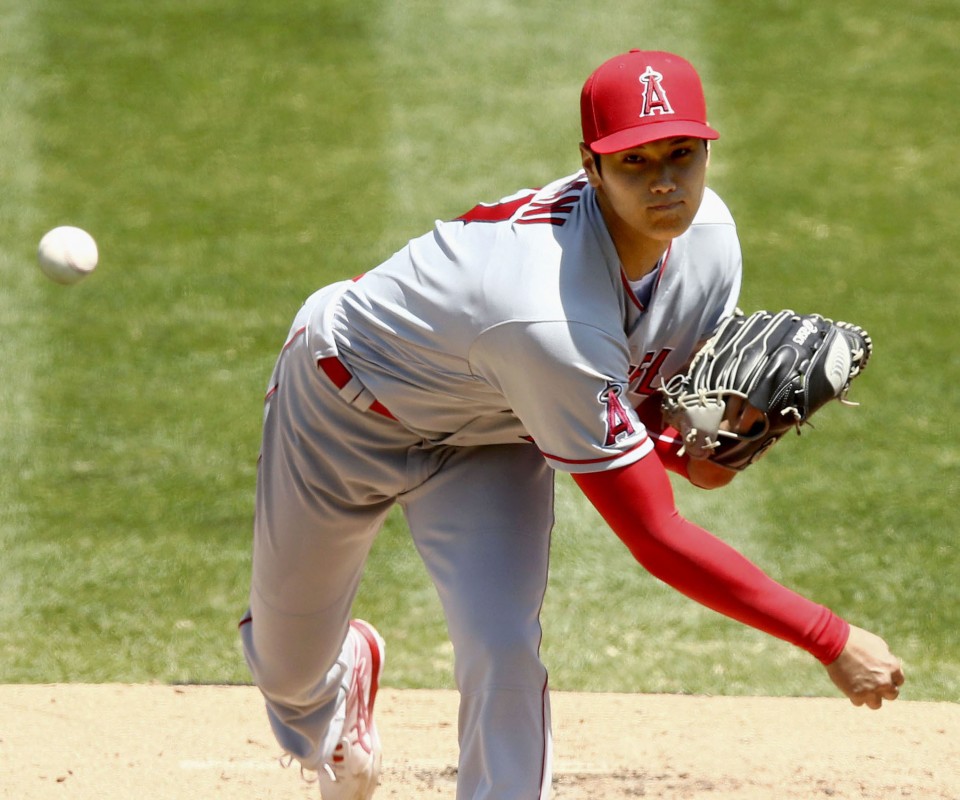 Shohei Ohtani of the Los Angeles Angels pitches against the Oakland Athletics on July 26, 2020 in Oakland, California. (Getty/Kyodo)

Q: How about shopping?

A: I went shopping as usual, sometimes with my interpreter. However, when the coronavirus first hit, I wasn't able to go out, and so I asked him to shop for me when he went.

Q: How about your meals?

A: Recently, I've been cooking for myself. I usually boil something or fry something, that kind of thing.

Q: Despite the coronavirus, multiple Japanese players will try to play in the major leagues.

I think it's an environment where you can come if you want, and if you don't want to come, you don't have to. I think it's good if people have individual freedom and are freer to make choices.

Q: What's new for you this offseason?

A: I'm taking one day off a week from practice, so not much has changed.

Q: Yu Darvish, who you are friends with, had a great season.

A: Great results. I've only seen the numbers, though, I didn't see him pitching so much. I haven't played against him yet, but I'm eager to face him in the batter's box.

A: He's one of those people who had so much more to work with from square one. I don't think we're that comparable. The first thing is for me just to execute those things I'm capable of. 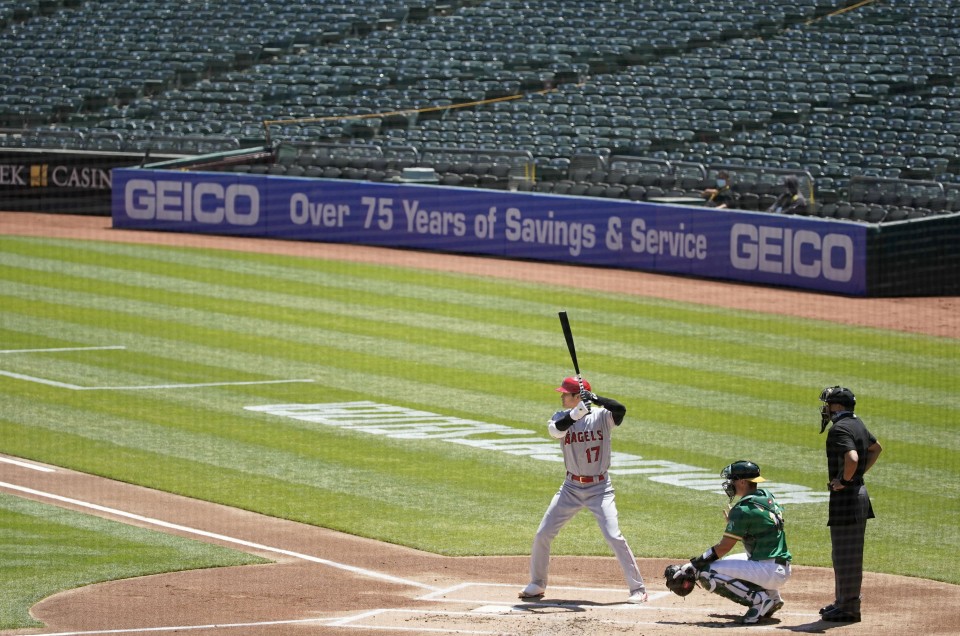 Shohei Ohtani of the Los Angeles Angels bats in the first inning of a game against the Oakland Athletics on July 27, 2020, in Oakland, California. (Kyodo) ==Kyodo

Q: Do you exchange emails?

A: He's contacted me a few times, I think he has a lot to say since he has experienced (rehabilitation from surgery) and has come so far... He's expressed concern, and I'm grateful for that.

Q: Yu Darvish took a few years to really come back from Tommy John surgery. Do you also need some years like him?

A: Every surgery is different. It depends on the individual, so you can't lump everyone together. I'll be one case study. More and more Japanese pitchers will end up going this route, though, so I want to work hard and be a good example for them.