The next four years under Joe Biden may be less tumultuous than under Donald Trump but will still be challenging for Japan as the U.S. president-elect is unlikely to ease up on China.

Biden is seen as preferring a more multilateral approach to trade. This comes as a relief to Japan, which salvaged the original Trans-Pacific Partnership free trade pact from collapse after the United States left at Trump's initiative, hoping that Washington would eventually come back.

Still, trade experts see no immediate U.S. return to what is now the 11-member TPP while Biden focuses on domestic issues such as containing the spread of COVID-19 and boosting the world's largest economy. The 77-year-old Democrat backed the TPP as vice president under former President Barack Obama.

The chances of the United States piling pressure on trading partners like Japan to make bilateral deals -- a tactic pursued by Trump -- may decrease, though a Biden administration would still make strong demands to Japan over trade and environmental issues.

"Biden would emphasize partnerships to contain unilateral Chinese policymaking and he would seek a more active Asian policy than the benign neglect of the Obama era," said Martin Schulz, chief policy economist at Fujitsu Ltd. 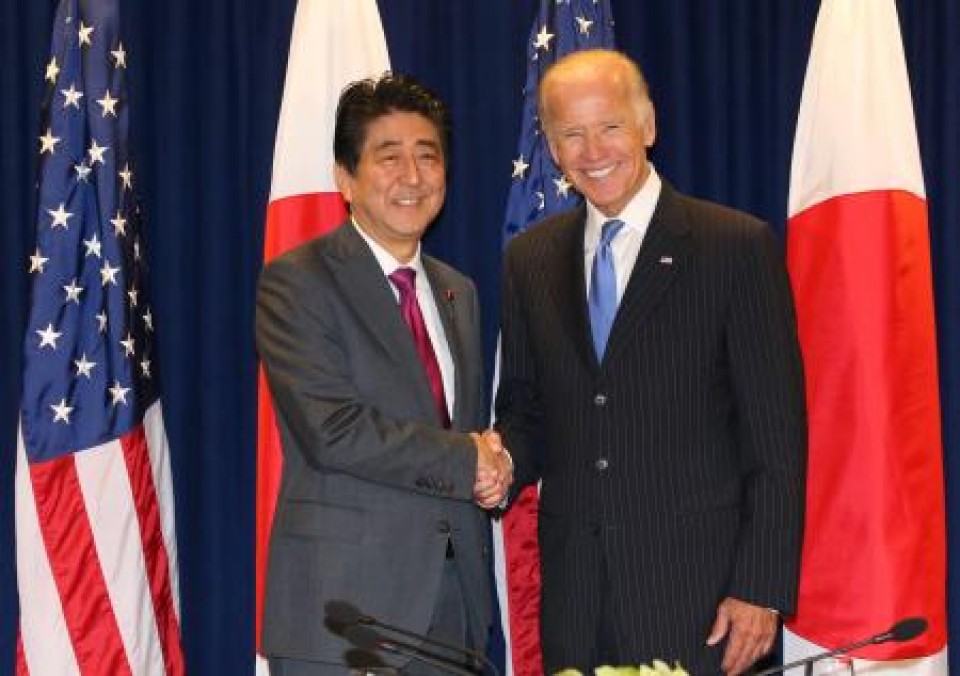 "Japan, as a 'middle power,' would gain a more important role. It needs to maintain its partnerships with the United States and China but show its partners in Southeast Asia an effective way to navigate trade, investment, and most importantly, digital policies," Schulz said.

While Trump pushed his "America First" agenda for nearly four years, Japan continued to stress the importance of multilateral arrangements like the Comprehensive and Progressive Agreement for Trans-Pacific Partnership as the TPP is now known.

In the meantime, Tokyo also faced growing pressure from its long-time ally and ended up acquiescing to Washington on a bilateral goods agreement in 2019.

Tokyo cut tariffs on U.S. farm produce such as pork and beef, while it barely escaped the threat dangled by Trump of imposing higher tariffs on auto imports from Japan. The nations were to begin negotiations toward a more comprehensive pact involving services and investment, but they have been delayed due partly to the pandemic.

Mie Oba, a professor of international relations at Kanagawa University, said Biden would seek a departure from Trump's focus on bilateral deals but cautioned that Democrats are traditionally harder on Japan in terms of trade than Republicans.

"That said, it would be difficult to think that Biden will shift to promoting free trade and the CPTPP when he needs to prioritize creating jobs and stabilizing the domestic economy" Oba said.

"There is a scenario in which Biden will use the CPTPP as a tool to counter China in seeking support from Republicans and Democrats," she said. "But this will make it difficult for Japan to promote the framework that would ultimately involve China."

Japan has been treading carefully to maintain the right balance with its top two trading partners, China and the United States.

The intensifying rivalry and competition between the United States and China for technological hegemony under Trump has unnerved Japan and some exporters have borne the brunt under the Trump administration.

The U.S. move to restrict exports of semiconductors to Huawei Technologies Co. has affected Japanese companies like Sony Corp., a supplier to the Chinese telecom giant aiming to expand its dominance of next-generation 5G technology.

Semiconductors and machinery to manufacture chips were the top two export items from Japan to China in 2019, according to Japanese government data.

Economists say Washington's hard-line stance against Beijing is expected to continue though Biden will likely be more predictable than Trump. They share concerns expressed by corporate executives about the decoupling of the U.S. and Chinese economies.

Biden's victory in a tight race came at a time when the export-driven Japanese economy is moving to emerge from its worst contraction due to the coronavirus pandemic.

Biden has promised to raise taxes on companies and wealthy people -- in sharp contrast to Trump who pushed for tax cuts -- increase stimulus and step up investment in infrastructure as well as clean energy. The promotion of electric vehicles is on his to-do list.

"Biden is planning to increase fiscal spending and this is a plus for the U.S. economy, which is also positive for the Japanese economy in the short term," said Yoshimasa Maruyama, chief economist at SMBC Nikko Securities Inc., while adding that policy may not be as "drastic" as previously expected.

"While the U.S.-China spat and the decoupling of their economies will continue, Biden is expected to take a calmer, rules-based approach," Maruyama said. "Whatever the political situation may be, companies need to do business in China."

Some economists say Biden's proposed economic package may not give Japanese exporters much of a boost, given his calls for high labor and environment standards in trade and investment.

"There is a question mark as to whether Japan has an edge (over foreign rivals) in the fields of electric vehicles and wind power, for instance," said Shunsuke Kobayashi, chief economist at Mizuho Securities Co.