The mayor of a small Japanese town has become an internet sensation after it was noticed that the characters of his name can be read as "Jo Baiden," phonetically the same as the name of the winner of the U.S. presidential election.

Yutaka Umeda, 73, who heads the town of Yamato in southwestern Japan's Kumamoto Prefecture, was caught by surprise when his family told him that the alternative reading of his name has drawn attention online. 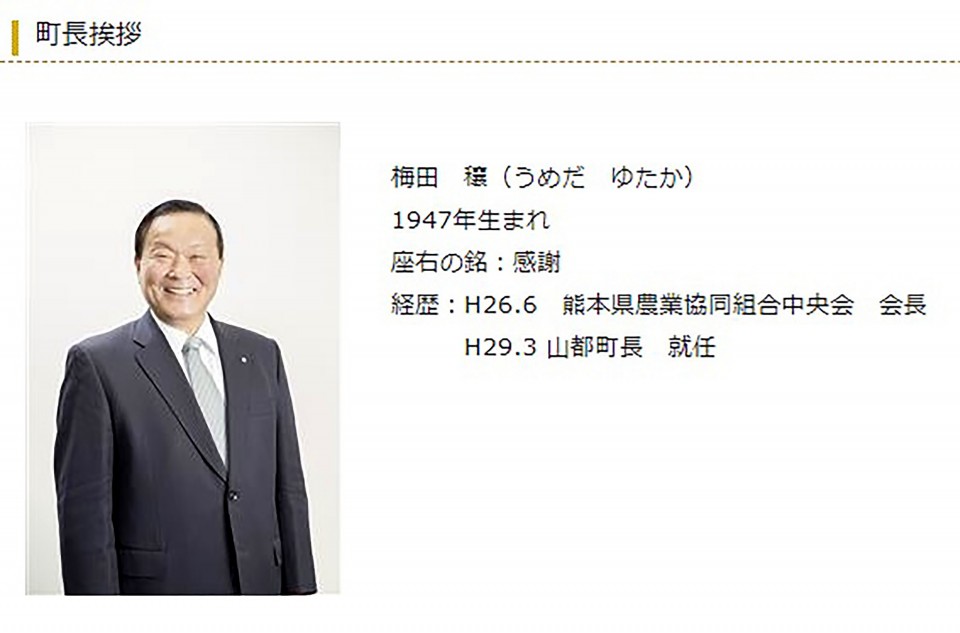 Supplied photo shows Yutaka Umeda's profile as shown on the website of the town of Yamato in southwestern Japan's Kumamoto Prefecture. (Kyodo)

"I feel very close to him. It feels as though I've also won the election after hearing about (Democratic nominee Joe Biden's) projected win" against incumbent President Donald Trump, Umeda said Sunday.

The mayor's family name comprises characters meaning "plum" and "rice field," but while they are usually pronounced as "ume" and "da" in the name -- a fairly common one in Japan -- they can be also pronounced as "bai" and "den." The character for Yutaka, meanwhile, is more commonly pronounced as "jo."

Umeda said he has received many messages following the presidential election results, congratulating him on the success of the former U.S. vice president under Barack Obama.

With Biden set to take office next year, Umeda now hopes it will also be a chance for his town with a population of about 15,000 to gain recognition.

"Being the president of a superpower as the United States and a mayor of Yamato -- the scale (of our jobs) is completely different, but I would like to think of ways to promote the town," he said.

When Obama was elected president in 2008, a city called Obama in Fukui Prefecture, central Japan, made headlines in both Japan and abroad.

Local residents established a group to support Obama and created merchandise featuring a drawing of his face. The mayor of the coastal city at the time even expressed hope that Obama would become a special honorary citizen.

When the president visited Japan in 2009, he addressed the city during a speech, saying, "And of course, I could not come here without sending my greetings and gratitude to the citizens of Obama, Japan."