Japan's new coronavirus cases surge to record of over 2,200 cases

Japan's coronavirus cases rose sharply Wednesday, logging a daily record of 2,203, with Tokyo also reporting a fresh record high in what experts say could be the third wave of the pandemic in the country.

Prior to Wednesday, record daily coronavirus cases in Japan were reported for three consecutive days through Saturday, with the figure hitting 1,735 on that day, according to the latest tally.

Prime Minister Yoshihide Suga has once again instructed Yasutoshi Nishimura, the minister in charge of the Japanese government's coronavirus response, and health minister Norihisa Tamura to do their utmost to limit the spread of the virus.

"I feel a very strong sense of crisis," Nishimura said at a press conference after a government review meeting on the pandemic Wednesday.

He stressed the need to strengthen coronavirus measures at dining establishments, which have been hotspots for the virus.

Toshio Nakagawa, head of the Japan Medical Association, at a separate press conference Wednesday, asked the public to refrain from unnecessary travel, especially to and from regions experiencing a resurgence.

"Please do not get complacent about the coronavirus," he said. "We can prevent it from spreading across the country through the combination of each of our actions."

Nakagawa said that although there was no concrete evidence to indicate that the government's "Go To Travel" subsidy campaign was responsible for the spike in cases, "there is no mistaking that it acted as a catalyst."

Tokyo logged 493 new coronavirus cases on Wednesday, with the metropolitan government planning to raise its virus alert to the highest level amid a resurgence, local government sources said.

The figure exceeds the previous high of 472 logged in Tokyo on Aug. 1.

Test results can take up to about three days to confirm. The number of tests conducted in the capital on Monday was a record 8,600, according to the metropolitan government.

"Asymptomatic patients are being detected as the number of tests has increased. It is expected that the reported cases will continue to rise but more important is how to keep serious cases low," Tokyo Gov. Yuriko Koike told reporters Wednesday.

The metropolitan government had lowered the alert on Sept. 10 from the highest to the current level.

The capital has seen more than 35,000 cases of coronavirus infections so far. In the week to Wednesday, the average daily number of new infections stood at 335, nearing the level seen in early August, which peaked at 346.1.

Among those hospitalized, 39 have developed serious symptoms -- down three from the highest figure since a state of emergency over the pandemic was lifted in late May, according to the local government.

Nakagawa warned the spike in Tokyo and Hokkaido is putting a strain on the health care system. The Hokkaido prefectural government said Wednesday that hospital beds for coronavirus patients were filled to more than 70 percent of capacity and that it had around 1,900 active cases as of Tuesday.

The northernmost main island has asked residents of its capital Sapporo to stay home after days of record infections in the region. 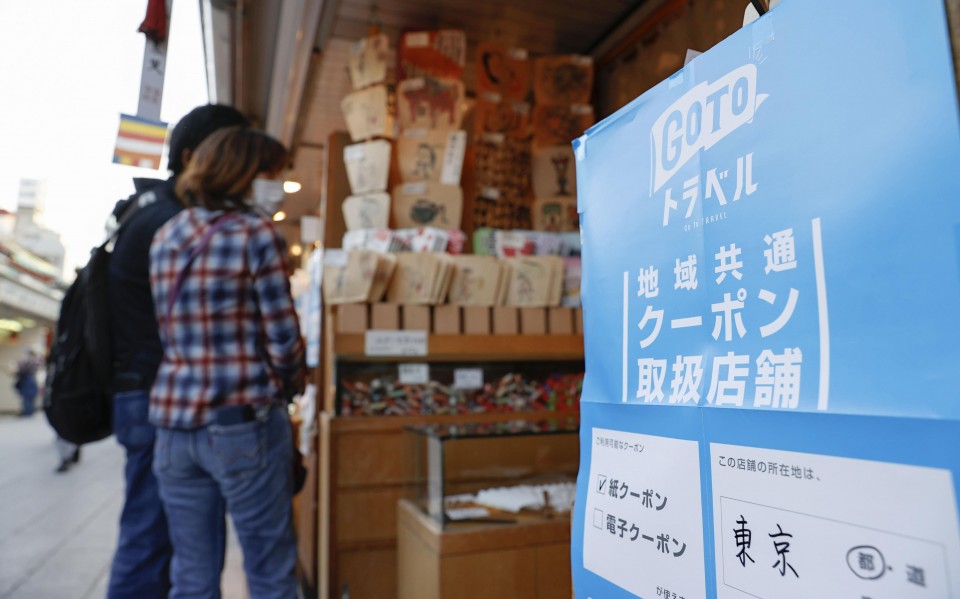 A poster of the Japanese government's "Go To Travel" subsidy program is seen at a store in Tokyo's Asakusa area on Nov. 18, 2020. Japan reported more than 2,000 new coronavirus cases the same day for the first time since the outbreak of the virus. (Kyodo) ==Kyodo 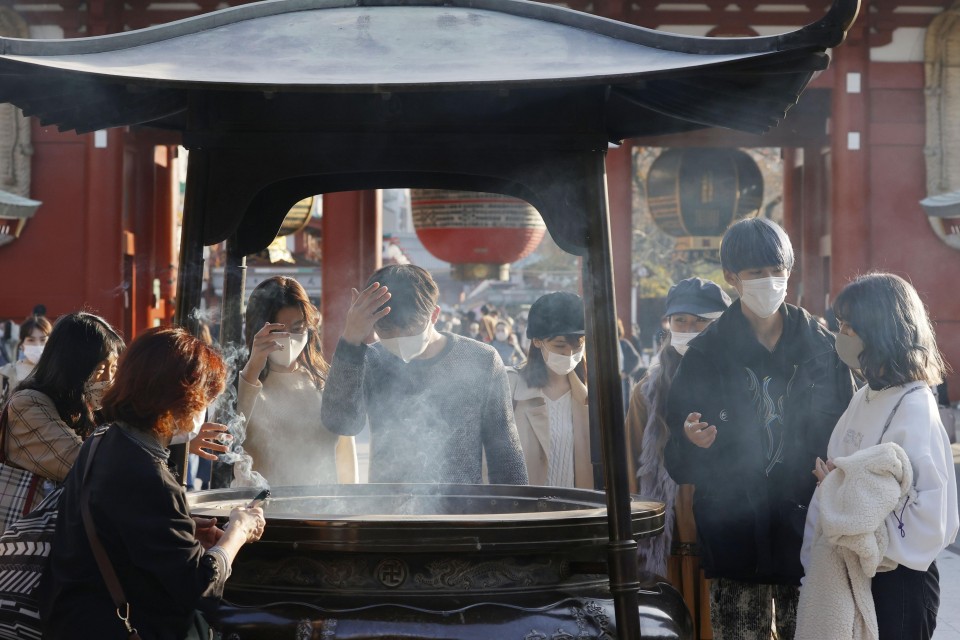