Stressing that stable relations between the neighboring countries would benefit the region and the world at large, Suga called on China to take "positive action" on the maritime dispute, according to the Japanese government.

Suga spoke with Wang for about 20 minutes at his office in Tokyo, his first in-person meeting with a senior Chinese official since taking office in September.

During the meeting, Suga also raised concerns over the situation in Hong Kong, where Beijing imposed a sweeping national security law in June that critics say undermines freedom in the semiautonomous territory.

Wang told reporters after the meeting that Beijing looks to improve ties with Tokyo and that the dispute in the East China Sea should not stand in the way of this. 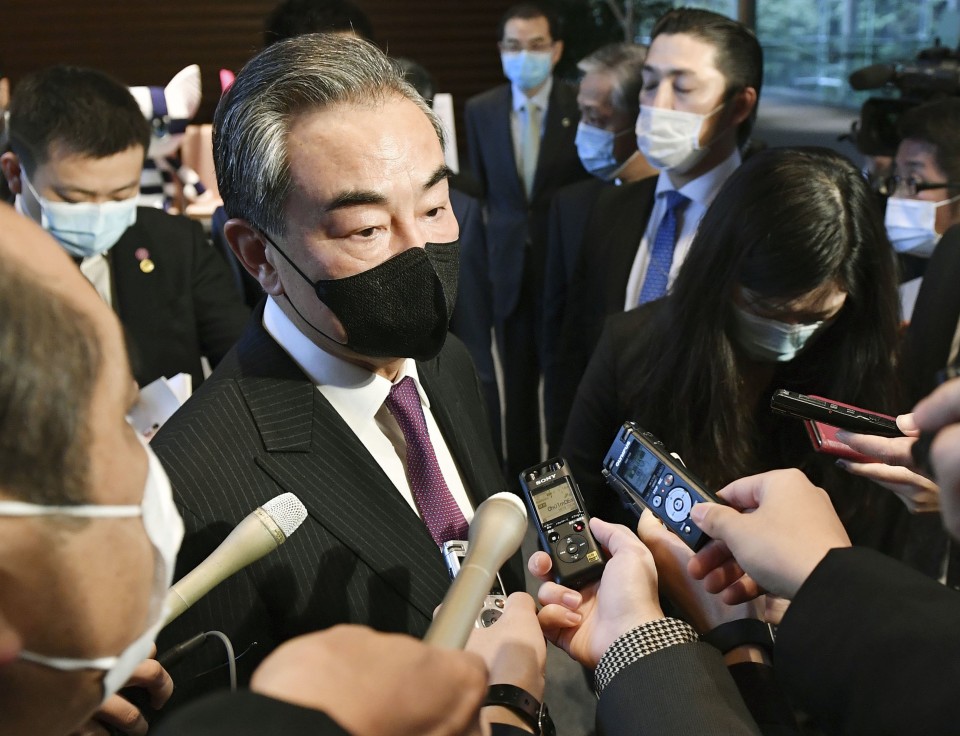 "Both sides must be calm and deal with this issue appropriately. We will work to ensure that it does not affect the development of China-Japan relations going forward," he said.

Japan brought the islands under state control in 2012, purchasing three of them from a private owner. Taiwan also claims the islets, calling them Tiaoyutai.

Wang said he relayed a message from Chinese President Xi Jinping to Suga voicing hopes of cooperating to fight the global coronavirus pandemic and spark economic recovery, and expressing support for the postponed Tokyo Olympics.

The trip by Wang, who doubles as a state councilor and is the highest-ranking Chinese official to visit Japan since the global spread of COVID-19, comes amid friction between China and the United States over issues ranging from trade to human rights.

Japan and China are also anticipating policy changes under U.S. President-elect Joe Biden, who defeated incumbent Donald Trump in this month's election and has promised a return to multilateralism.

In the meeting with Wang, Suga welcomed an agreement to ease coronavirus travel restrictions to allow business trips between their countries, which according to China's Foreign Ministry will take effect on Monday.

The two affirmed cooperation over the Tokyo Olympics and Paralympics, which have been postponed to next summer, and the 2022 Winter Games in Beijing, according to the Japanese government.

The Japanese premier also asked for Beijing to ease import restrictions on Japanese food imposed in the wake of the 2011 Fukushima nuclear disaster, and to support Tokyo's efforts to repatriate citizens abducted by North Korea in the 1970s and 1980s.

Wang on Tuesday held talks with Japanese Foreign Minister Toshimitsu Motegi. Aside from Suga, Wang also met separately with Chief Cabinet Secretary Katsunobu Kato and Toshihiro Nikai, secretary general of the ruling Liberal Democratic Party on Wednesday before heading to South Korea for the final leg of his four-day trip.