Japan will suspend its "Go To Travel" subsidy program in areas with a high number of coronavirus cases, Prime Minister Yoshihide Suga said Saturday, in a policy reversal from his approach already much criticized for focusing too much on stimulating the economy amid record numbers of infections.

The decision was made as Japan confirmed more than 2,500 new daily cases of the novel coronavirus, marking a record high for the fourth day in a row, and a day after a government panel of medical experts proposed reviewing the campaign aimed at promoting domestic tourism.

At a meeting of the government's task force on measures against the virus, Suga said accepting new bookings for trips to areas where infections are spreading rapidly through the campaign will be halted. 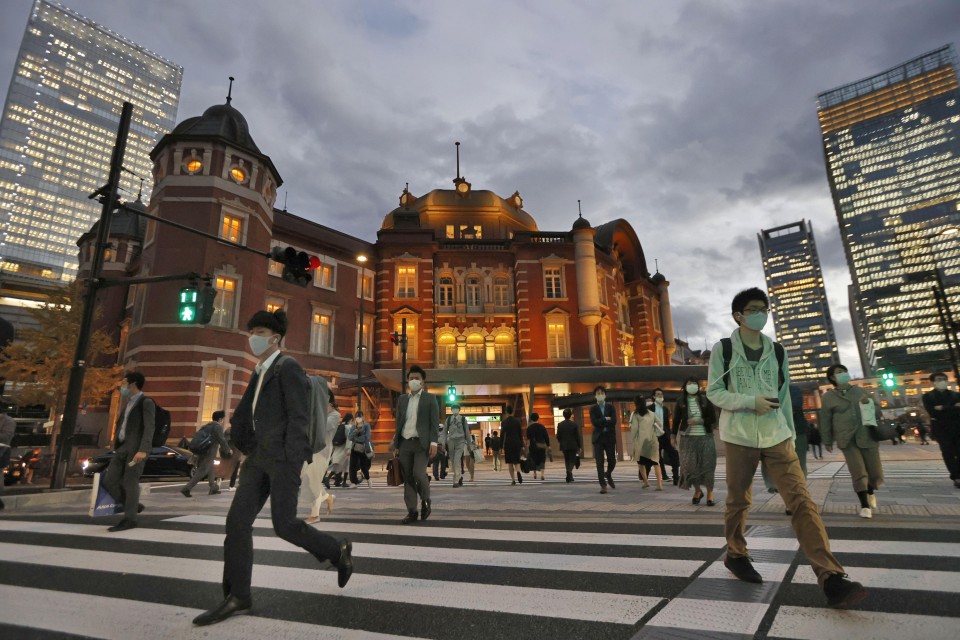 Suga also said the government will ask prefectural governors to consider stopping the issuance of "Go To Eat" discount coupons aimed at encouraging dining out at restaurants.

While calling on people to wear face masks when dining and take all other possible measures to prevent the further spread of the virus, he stopped short of saying when the suspension of the travel subsidy program will begin and in which areas.

Yasutoshi Nishimura, minister in charge of the government's coronavirus response, told a press conference that the Japan Tourism Agency is now working on the details of the suspension and they are expected to be ready "without taking many days."

The National Governors' Association will discuss how to respond to the government's decision on Monday.

Opposition parties are poised to grill Suga over his policy flip-flop, made not earlier but on the first day of a three-day weekend.

"Opposition parties had said (the campaign) should be canceled, but the government had never listened," said Akira Koike, head of the secretariat of the Japanese Communist Party.

Amid the resurgence, Tokyo confirmed on Saturday 539 new daily cases of coronavirus, rising above the previous record of 534 registered on Thursday.

Of the total, about 60 percent or 331 contracted the virus via unknown routes, according to the metropolitan government.

Suga, who said "maximum caution" is required in the current virus situation, has sought to strike a balance between preventing the spread of the virus and revitalizing the battered economy.

Until Saturday, Suga and ministers in charge of the government's response to the pandemic had repeatedly denied the possibility of suspending the travel campaign.

After the task force meeting, Suga told reporters that the government is committed to covering the costs of virus tests for people staying or working at facilities for the elderly.

Not just Tokyo, but other urban areas also saw a sharp rise in new cases, with Osaka Prefecture hitting a record 415 on Saturday.

The nationwide single-day figure came to 2,592 on Saturday, bringing Japan's cumulative total to 131,565 cases. The death toll now stands at 1,994.

Medical experts have described the resurgence as a third wave of infections, attributing it to the arrival of cooler temperatures that have forced people to spend more time indoors, often in rooms without sufficient ventilation that can stop the virus from spreading.

Toshio Nakagawa, head of the Japan Medical Association, has said there is no concrete evidence to indicate the travel program is responsible for the recent spike in coronavirus cases, but "there is no mistaking that it acted as a catalyst."

Haruo Ozaki, who heads the Tokyo Medical Association, said it is very possible that people's movements have spread infections. "We would like (the government) to suspend (the program)," he said.

Despite such concerns, transport hubs around the country saw increased traffic on Saturday, with travelers voicing confusion over the government's about-face on the travel initiative.

"Travelers no longer know what rules they should follow," said a 56-year-old man from Osaka Prefecture who was visiting a popular sightseeing spot in Kyoto, western Japan, with his wife. "(The government) takes too long to decide on anything."

Tokyo's Haneda airport was packed with families, with many people standing in long queues waiting to pass security checks.

"I did not expect such a rapid surge in infections," Setsuko Oishi, 60, said. On her way to Okinawa Prefecture with her family, Oishi said she would have canceled the trip if the third wave had come earlier.

In Hokkaido, Tetsuyuki Takeda, a 66-year-old fishmonger in Otaru, said possible restrictions to the scheme are "terrifying" to someone managing a business. Japan's northernmost main island recorded over 300 daily infections for the first time on Friday.

The "Go To Travel" program was launched in late July and effectively covers about half of domestic travelers' expenses.

So far, some 40 million trips have been taken through the program, with 176 people accessing the subsidy found to have been infected with the virus, according to the government. 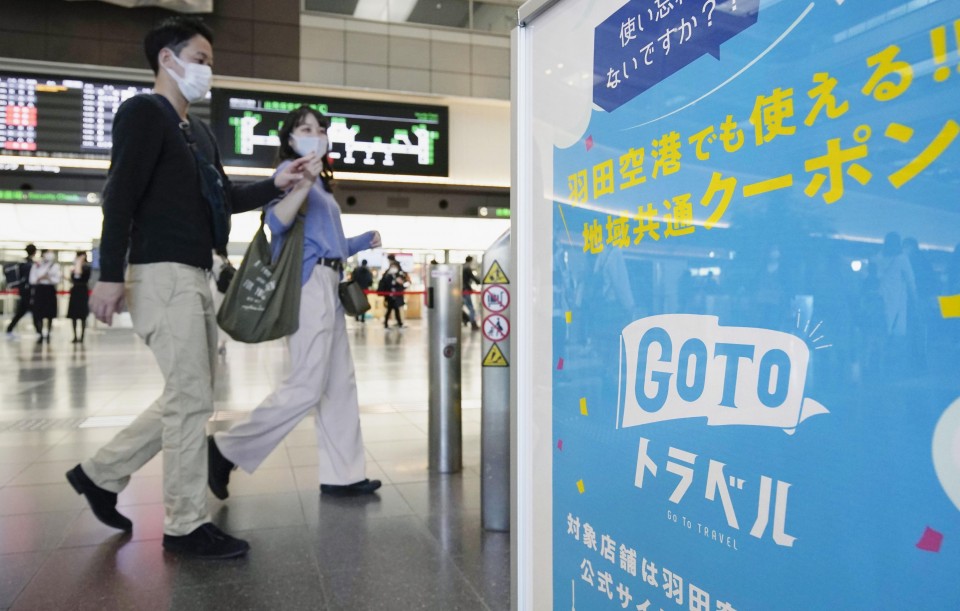 A signboard of the Japanese government's "Go To Travel" subsidy program is seen at Tokyo's Haneda airport on Nov. 21, 2020, the first day of a three-day holiday. (Kyodo) ==Kyodo 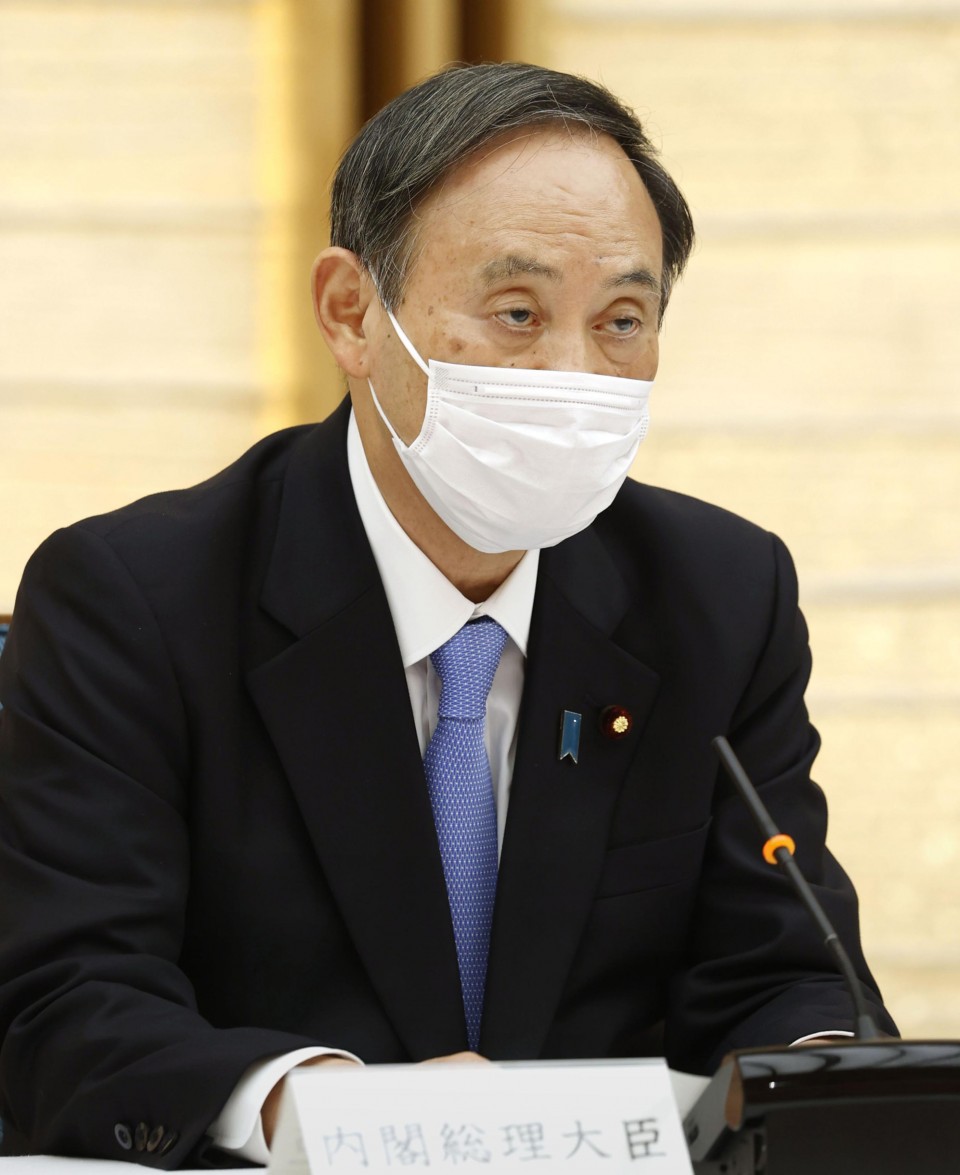 Japanese Prime Minister Yoshihide Suga speaks at a meeting of the government's anti-coronavirus task force in Tokyo on Nov. 21, 2020, unveiling a plan to limit the use of the "Go To Travel" subsidy program due to a recent resurgence of novel coronavirus infections. (Kyodo) ==Kyodo