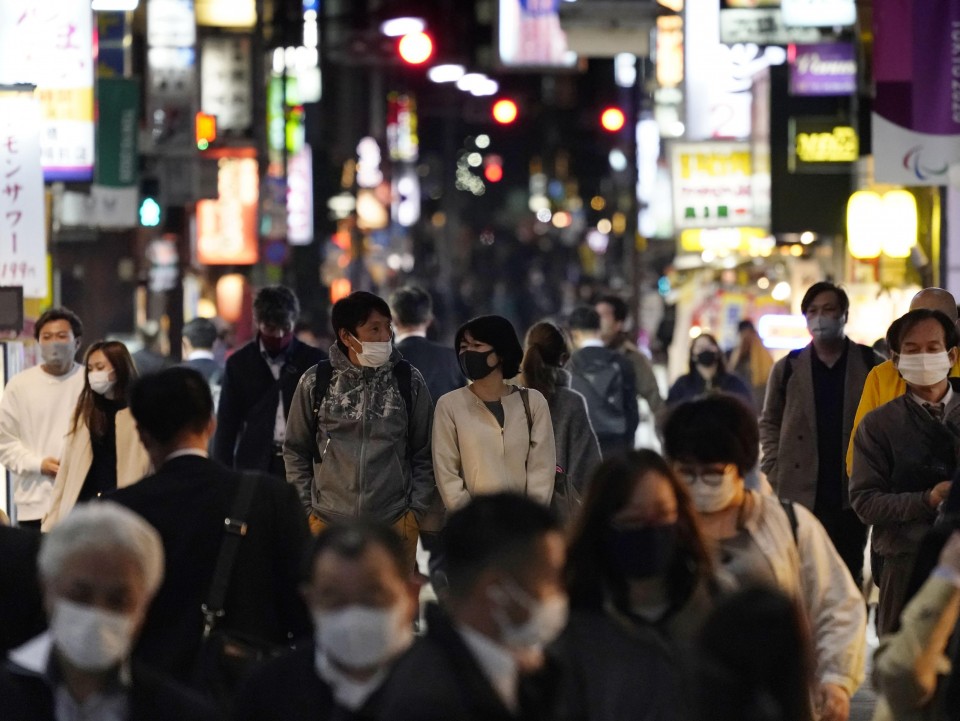 People wearing face masks walk in Tokyo's Shimbashi area on Nov. 26, 2020, amid the unabated rise in coronavirus infections in the capital. (Kyodo) ==Kyodo

The Tokyo metropolitan government reported on Friday 570 new coronavirus infections, pushing up its monthly tally for November to the highest on record.

The figure, which surpassed 539 logged last Saturday, brought the number of infections confirmed in Tokyo in November to 8,567, topping 8,125 in August and reflecting the growing severity of infections in the capital.

The capital's tally now stands at around 40,000 cases, with the number of people suffering severe COVID-19 symptoms rising by one from the previous day to 61 people, the highest level since a state of emergency declared over the pandemic was lifted in late May.

As test results can take a few days to confirm, Friday's figure reflects the outcomes of a record of over 9,000 tests conducted on Tuesday following a three-day weekend through Monday.

Daily infection figures tend to be low at the start of the week, as many medical institutions do not conduct testing for the virus on weekends.

The metropolitan government is believed to have increased the number of tests on Tuesday to account for the national holiday on Monday.

Across the country, the number of new infections rose by over 2,500 on Friday, bringing the nationwide tally to around 143,000. More than 2,000 deaths have been reported.

Among other prefectures with a high number of infections reports, Osaka reported 383 new infections on Friday, while Hokkaido saw 252 and Aichi logged a daily record of 234.

"(The situation) has gone beyond the stage of relying on the individual cooperation of the public," said Shigeru Omi, head of the central government's panel on virus countermeasures, at a meeting Friday.

Stressing the need for the central and prefectural governments to strengthen their measures, he warned that hospitals are struggling to provide other medical treatments while coping with the virus.

Last Thursday, the metropolitan government raised its virus alert to the highest of four levels, which was last in place until Sept. 10.

Tokyo Gov. Yuriko Koike on Wednesday expressed concern about the capital's trajectory and requested that restaurants serving alcohol close by 10 p.m. from Saturday through Dec. 17.

A similar request made during August was later extended until mid-September for Tokyo's central 23 wards.

Prime Minister Yoshihide Suga said the shorter hours would be "crucial" in stemming the coronavirus' spread, with other major cities Osaka, Nagoya and Sapporo having already taken or getting set to take similar steps.

The metropolitan government has also decided to halt the issuance and sale of discount coupons under a state-run subsidy program, dubbed "Go To Eat," to encourage dining out.

Speaking at a coronavirus task force meeting, Suga said trips departing from Osaka and Sapporo, in addition to those to either city, would be removed from the travel program.

According to Shigeki Iwai, senior vice minister of transport, 202 people applying for the subsidies had been found to have contracted the virus as of Thursday.

Japan to test 15,000 people for coronavirus antibodies by end of year