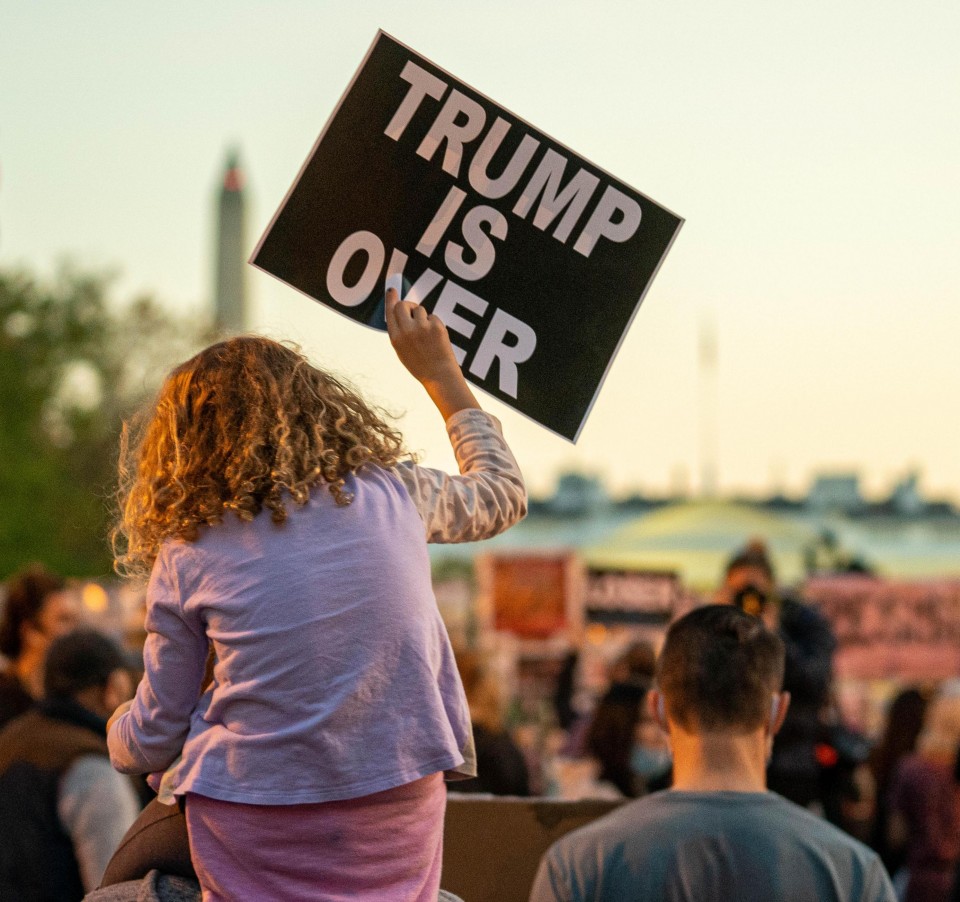 A girl sits atop her father's back with a sign reading, "Trump is Over," at BLM Plaza near the White House in Washington on Nov. 6, 2020. (UPI/Kyodo)

U.S. President-elect Joe Biden has long been preparing to become the commander-in-chief of the world's most powerful country, building upon his vast experience on the global stage as a two-term vice president and longtime senator.

But even for the 77-year-old seasoned politician, it may not be an easy job to pick up the pieces of what he views as President Donald Trump's "broken" foreign policy, driven by an "America First" approach that has left the United States alienated amid battered diplomatic credibility and fraying alliance relationships.

Experts on Asian foreign and security issues warn that it may take time to overcome skepticism among allies that Washington can be trusted to honor its international and regional commitments, while the Biden administration will also face challenges in pursuing a multilateral approach to counter China.

A major change seen in the past four years has been that allies including Japan have "openly" questioned U.S. security commitments, said Jeffrey Hornung, a political scientist at the Rand Corporation, a U.S. research organization, during a phone interview.

"In the past...there's been that sort of fear, worry, amongst U.S. allies. But publicly it was never voiced and even privately most people said, 'Yeah, at the end of the day, the United States is committed to our defense,'" he said.

"(Now) there are some among our allies who question the U.S. extended deterrence commitment more than they used to," he added, referring to U.S. protection assured to allies against potential adversaries, including through its nuclear weapons.

The erosion of trust does not seem to be limited to the security realm.

"The United States just has so much less credibility and respect in Northeast Asia than in any other time in our modern history," Daniel Russel, a former U.S. senior diplomat for East Asia, said during a webinar hosted by the Korea Society based in New York.

A survey by Pew Research Center, released in mid-September, showed that the image of the United States has suffered globally since Trump, 74, took office in 2017, with a favorable view of the country hitting its lowest point in Japan and several other countries since polling on the topic started nearly two decades ago.

Just three days after his inauguration, the real estate developer-turned-president shocked countries in the Asia-Pacific region by withdrawing the United States from the Trans-Pacific Partnership, a 12-member free trade agreement that was aimed at countering China's increasing economic clout.

Frustrated with U.S. trade deficits, which he views as a sign of his country being "ripped off," Trump has slapped tariffs on steel and aluminum imports from trade partners, including close U.S. allies, under a claim of potential national security risks.

On the security front, Trump has viewed allies like Japan and South Korea as freeloaders, pressuring them to raise their contributions by substantial amounts to offset the costs of stationing U.S. troops in their countries.

Susan Thornton, another former senior U.S. diplomat who spoke at the same webinar, said she expects the Biden administration will come "out of the blocks" with immediate signs of restored U.S. leadership in the world by reversing Trump's major decisions to exit the World Health Organization and the Paris climate accord.

Coupled with Biden's stated resolve to recommit to alliances, the new administration should be welcomed by many in the international community, she said.

But she noted that in facing "fundamental challenges" from China and North Korea, it may take time for the Biden administration to "get up to speed" and its efforts will also "need a lot of help from our partners around the world."

U.S.-China relations have plummeted to their lowest point in decades, with the Trump administration taking an increasingly confrontational stance on numerous fronts including trade practices, technology, Hong Kong, Taiwan, human rights issues and the control of the South China Sea.

It is widely believed that Biden will maintain the Trump administration's toughness on China due to the broad support for such an approach across the U.S. political spectrum.

But his emphasis on multilateralism and climate change issues could be exploited by China, the world's largest emitter of carbon dioxide, as Beijing would have new bargaining chips to push for the removal of U.S. tariffs imposed under the Trump administration which sought progress on alleged intellectual property and technology theft issues.

Biden's pledge to restore the U.S. role as a champion of democracy and human rights around the world could also complicate relations with Southeast Asian nations that do not necessarily have stellar records on human rights issues, at a time when cooperation with them is vital in countering China.

"If we were to cut off a country because of its bad human rights record -- Vietnam or Myanmar or whatever -- then it's more likely that they go to the Chinese, they go to the Russians, the bad human rights pieces continue and our ability to act to influence them is greatly diminished," Abraham Denmark of the Woodrow Wilson International Center for Scholars said at a different online event.

Meanwhile, uncertainties remain over the extent to which the United States will aspire to take on a leadership role in the international arena.

Denmark, who has served as deputy assistant secretary of defense for East Asia, said one of the questions he had received "more consistently than anything else" from U.S. allies and partners in the past four years has been if the Trump administration is "an aberration in American politics" or "if it's the sign of things to come."

"And my answer has been that polls suggests that American views have not changed, that America still wants to be a leader in the world," he said, while acknowledging that overcoming the skepticism is "going to take time."

Ian Bremmer, president of the political risk research firm Eurasia Group, said a transition from Trump to Biden would likely bring relief to many global leaders, but they would eventually have to face the reality that the United States will not return to acting as the world's police force or as the architect of global trade.

"There are very few Americans that support more trade deals...Biden would not try to get the United States back into the TPP" even though he was the vice president of Trump's predecessor Barack Obama who championed it, Bremmer said, adding, "The Americans are going to continue to not want to do a lot of the leadership that the Americans have been doing historically."

"And that's the way the rest of the world is going to respond to the United States," he added.