FOCUS: Japan to stay in step over fiscal stimulus with U.S. under Biden

Japan will seek to keep in step with the new U.S. administration under President-elect Joe Biden in taking fiscal stimulus steps to revive the pandemic-hit world economy, while watching whether Washington will seek to return to a trans-Pacific free trade pact it quit three years ago, Japanese officials say.

The overall shape of Biden's policies remains unclear, but it is hoped he will take a softer stance on trade than President Donald Trump, who has advocated protectionist measures. 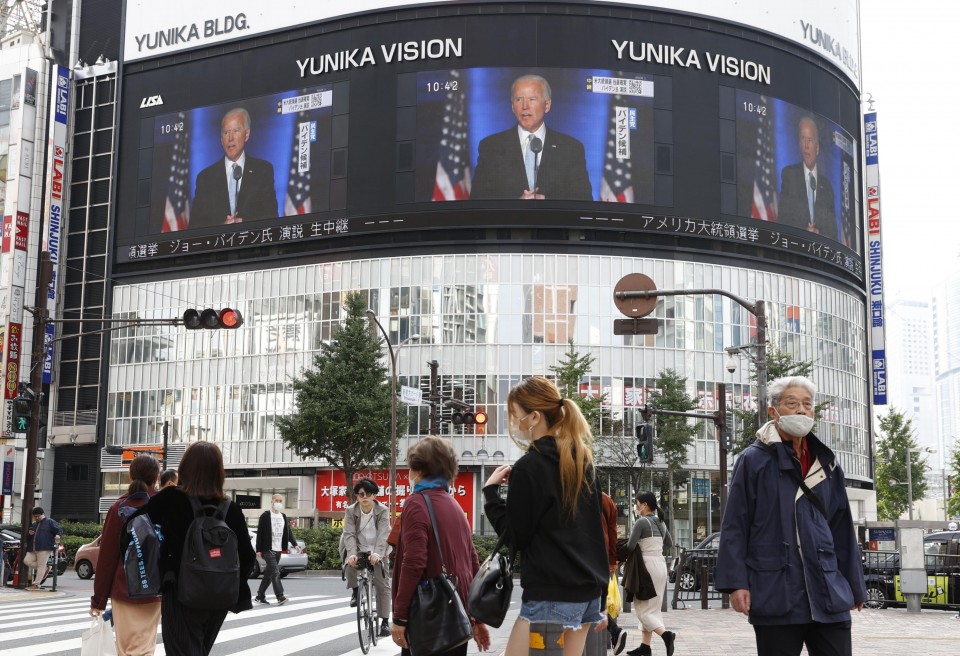 On Tuesday, Japanese Prime Minister Yoshihide Suga instructed ministers to compile a third extra budget for the fiscal year through March and draw up a fresh economic stimulus package to help the economy rebound from the impact of the coronavirus. Some ruling camp lawmakers say the budget could total between 10 trillion yen ($95 billion) and 15 trillion yen.

The order came after market forecasts that Japan's economy grew an annualized real 18.03 percent in the July-September period, in what would be a sharp rebound from a 28.1 percent contraction the previous quarter -- the worst in records going back to 1955.

Government sources say the supplementary budget will likely fund an extension of the domestic "Go To Travel" subsidy campaign beyond late January to continue supporting the tourism sector, while spurring consumption and helping businesses secure employment.

In the United States, expectations for stimulus measures have been growing after Biden pledged during the election campaign to invest heavily to upgrade U.S. infrastructure and shift to a clean-energy economy. He has also rolled out a "Buy American" plan featuring spending on U.S.-made products and research.

For Japan, the world's third-largest economy, trade negotiations with the United States remain a priority issues. In 2019, its U.S.-bound exports amounted to 15.25 trillion yen, while imports came to 8.64 trillion yen.

A potential U.S. return to the Trans-Pacific Partnership deal from which Trump pulled out the world's largest economy in 2017 will be keenly looked out for by the Suga administration. The now-11-member TPP, which includes Japan, is part of Tokyo's strategy aimed at countering China's growing influence.

Britain has also expressed its interest in joining the TPP, a development Japan has welcomed with Foreign Minister Toshimitsu Motegi saying his country will "continue to give necessary support."

Biden served as vice president under Trump's predecessor Barack Obama, who pushed for the agreement, but political experts say that trade issues may initially take a back seat after Biden takes office in January as his focus will likely be on domestic issues such as containing the coronavirus pandemic.

Motegi said earlier this month that Tokyo "doesn't expect the United States to come back to the TPP anytime soon, irrespective of the election outcome."

A senior Japanese economy ministry official has also said it will "not be that easy" for the United States to return to the TPP, due partly to "strong opposition by the Democrats in the U.S. Congress."

Earlier in the week, Chief Cabinet Secretary Katsunobu Kato, Japan's top spokesman, said at a news conference in Tokyo that his country's position of seeking to include the United States and as many other countries and regions in the pact as possible remains unchanged.

Trump has distanced himself from multilateral deals like the TPP and pursued a bilateral approach to free trade, sometimes threatening additional tariffs on imported goods.

Under his administration, a Japan-U.S. trade agreement came into force in January this year. Washington won a reduction in tariffs on American farm products such as beef and pork, while Japan dodged higher auto tariffs that Trump had threatened to impose on national security grounds.

The second stage of trade talks aimed at negotiating a more comprehensive bilateral accord on services trade and investment was expected for the spring, but postponed due to the virus epidemic.

Meanwhile, some Japanese officials believe a Biden administration is likely to continue being tough on China, citing the massive U.S. trade deficit with the world's second-biggest economy.

Washington has since September banned suppliers of semiconductors using U.S. technology from exporting their products to Huawei Technologies Co. as part of further export restrictions on Beijing.

As many of its major domestic companies operate in both China and the United States, Japan will try to continue playing a balancing act between these two countries, the officials say.