The first international sports meet hosted by Japan since the postponement of the Tokyo 2020 Olympics in March concluded Sunday without any apparent difficulties.

Employing stringent measures to prevent the spread of the novel coronavirus, the one-day Friendship and Solidarity gymnastics competition was an important trial for Tokyo Olympic organizers studying how to safely hold events in a world still struggling with the coronavirus pandemic. 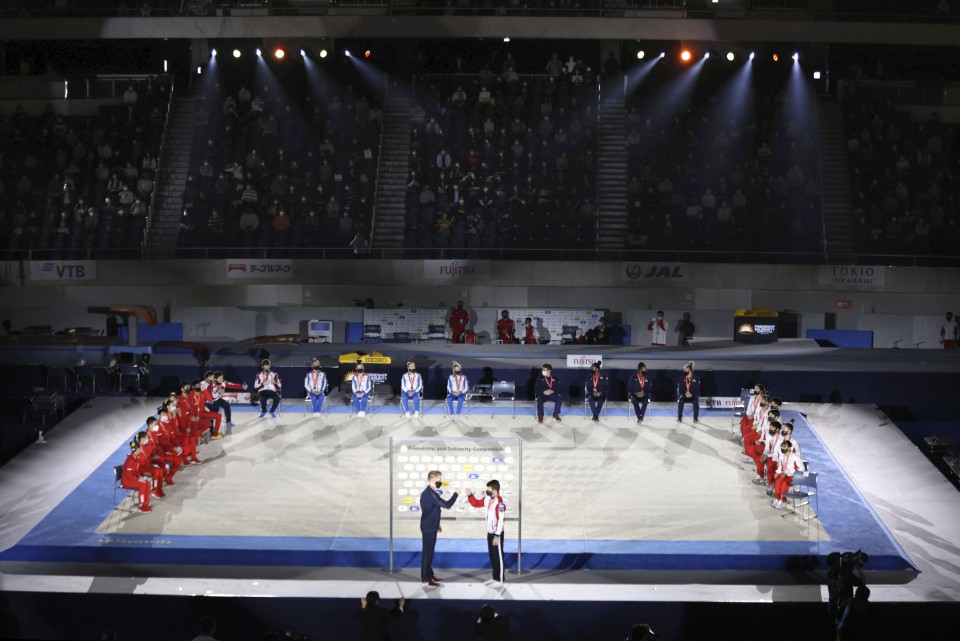 Gymnasts give each other medals at the closing ceremony of a four-nation meet in Tokyo on Nov. 8, 2020. Japan hosted an international meet of an Olympic sport for the first time since the outbreak of the novel coronavirus, inviting China, Russia and the United States. (Pool photo) (Kyodo) ==Kyodo

A total of 30 gymnasts from Japan, the United States, Russia and China were split into two teams of mixed nationalities and genders before 2,094 spectators at Yoyogi National Gymnasium.

Tokyo Games Organizing Committee President Yoshiro Mori and Olympics minister Seiko Hashimoto looked on, while a message from International Olympic Committee President Thomas Bach proclaimed the meet as an example of a sporting event that can be safely hosted amid the pandemic.

Japan's Kohei Uchimura, a two-time men's Olympic overall champion, received the highest score on any apparatus, a 15.200 on the horizontal bar.

"We've left things in a positive manner heading into next year's Tokyo Games. It was really fun," said the 31-year-old Uchimura, whose score bettered his world-championship winning mark last year. "I hope people do not think the Olympics cannot be held."

International Gymnastics Federation President Morinari Watanabe played a key role in hosting the event, calling it a first step toward the staging the Olympics after their one-year postponement.

Given the effort, it was no surprise Japan was named Sunday to host both the gymnastic world championships and the rhythmic gymnastics worlds next October in Kitatakyushu.

Sunday's meet called for a higher level of countermeasures than currently demanded by the Japanese government for overseas athletes. All participants were required to take polymerase chain reaction tests within 72 hours before departing for Japan and every gymnast had to undergo daily testing in the lead up to the event. 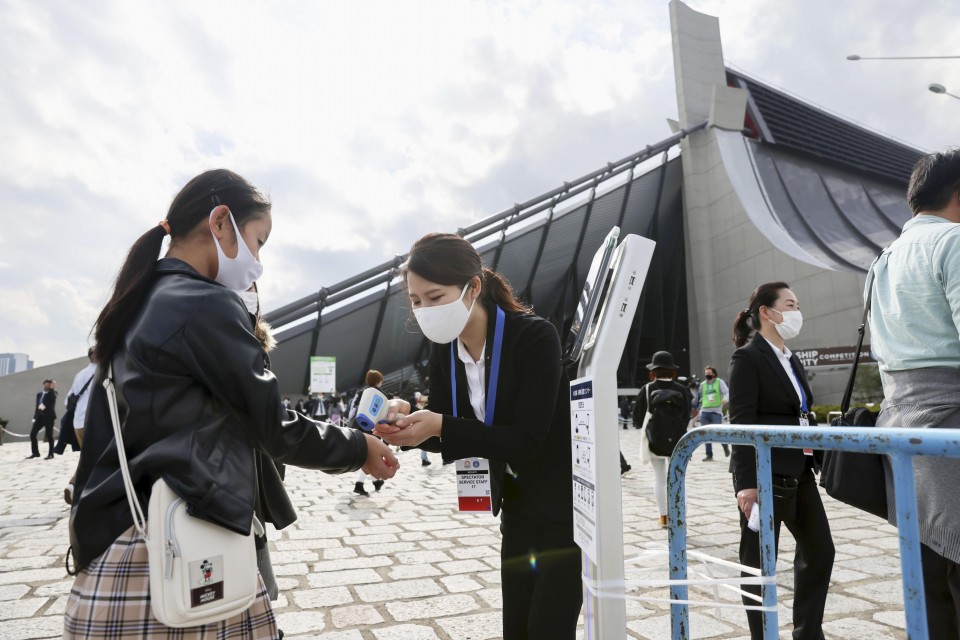 A visitor (L) has her temperature checked ahead of a four-nation gymnastics meet in Tokyo on Nov. 8, 2020. Japan hosted an international meet of an Olympic sport for the first time since the outbreak of the novel coronavirus, inviting China, Russia and the United States. (Pool photo) (Kyodo) ==Kyodo

Visiting gymnasts traveled by charter and were segregated from other passengers at the airport upon arrival. The teams' movements were severely restricted, with the competitors shielded within a "bubble" from outside sources of contamination.

With those strict measures in place, the visiting teams were allowed to forgo the government's mandatory 14-day quarantine for people arriving from overseas.

Like athletes, coaches and interpreters, bus drivers, security guards and operations staff also had to report negative PCR test results prior to the event.

In a world where international sporting competition has been severely hindered by the pandemic, the gymnasts demonstrated their appreciation for each other by giving out elbow bumps and then hanging medals around their fellow competitors' necks at the event's conclusion.

"It is our duty to give people dreams and hope by holding sporting events even under the restrictions caused by the novel coronavirus pandemic," said Uchimura, whose participation was put in doubt a week earlier before his positive test was deemed a "false positive" by the tournament's medical staff.