Japanese astronaut Soichi Noguchi said Thursday that U.S. company SpaceX's Crew Dragon vessel provided "the best" ride as compared to the two other spacecraft -- the U.S. Space Shuttle and Russia's Soyuz craft -- he has previously flown in for missions to the International Space Station.

"The Dragon is the best, short answer. And of course each vehicle has its own peculiarity, but I feel Dragon is really ready to go up...It's fun to ride," said Noguchi, 55, during a press conference at the ISS with other astronauts from NASA. He has become the only active astronaut to launch aboard three different types of spacecraft. 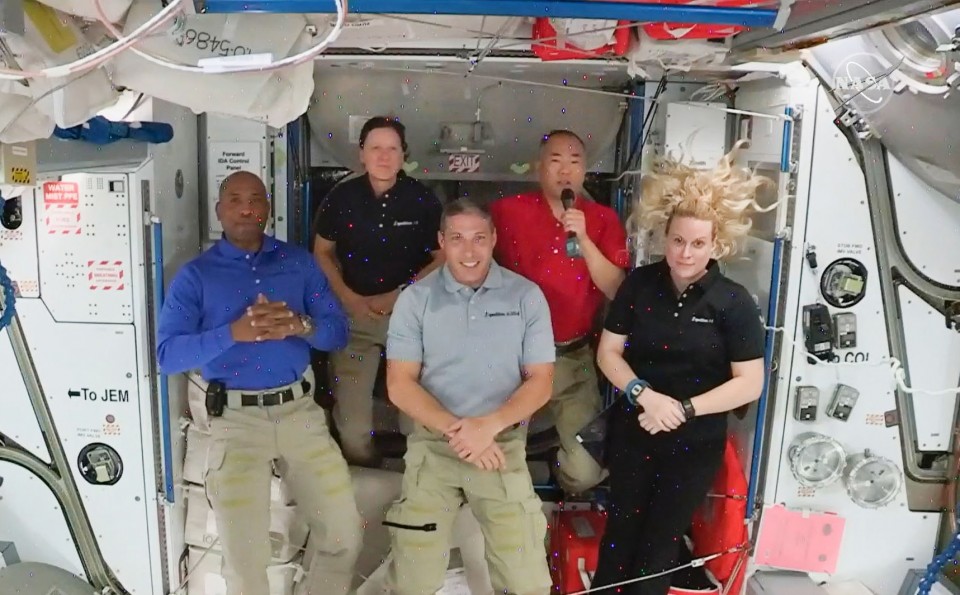 The Crew Dragon, carrying Noguchi and three American astronauts, docked with the ISS on Monday following its liftoff atop a Falcon 9 rocket from NASA's Kennedy Space Center in Florida a day earlier.

Noguchi described feeling as if the spacecraft "really wanted to go to space" as the rocket was being fueled in the minutes before blastoff, as well as when the vibrations hit from the thrusters firing outside his window seat.

"This feels like you are actually inside a dragon, bringing us up to space, so that was quite a feeling," he said.

It was the second manned flight to the orbiting laboratory by the commercially developed spacecraft, following a test flight earlier in the year with two NASA astronauts. Noguchi was selected as the first non-NASA astronaut to fly aboard the Crew Dragon.

"I'm very humbled and honored to fly three vehicles after Mr. John Young and Wally Schirra," Noguchi said, referring to two NASA astronauts who are the only others known to have launched on three kinds of spacecraft.

But he also welcomed that more astronauts are expected to follow suit through a series of planned Crew Dragon missions, while signaling eagerness to fly in a new spacecraft in the future.

"The race (has) just begun for who's going to be the first one" to fly in four different space vehicles, he said, adding, "So, watch out for that."

Noguchi is a veteran astronaut with experience from two previous missions, having been aboard the Space Shuttle Discovery in 2005 -- the first Space Shuttle mission after the tragic loss of Columbia in 2003 -- and a Russian Soyuz spacecraft for a 161-day stay on the ISS between 2009 and 2010.

Noguchi and the three NASA astronauts will stay at the ISS for six months and conduct scientific experiments, among other activities. Their arrival raised the total number of members aboard the ISS to seven.

The National Aeronautics and Space Administration has highlighted the importance of sending more astronauts to the ISS, which increases the capacity for scientific research in space.

Japanese astronaut Akihiko Hoshide, 51, is also expected to fly aboard the next Crew Dragon mission to the ISS in the spring to serve as a commander there, according to the Japan Aerospace Exploration Agency.

The Crew Dragon spacecraft, which is 8.1 meters tall with a diameter of 4 meters, is made up of a capsule that carries people and a trunk that is partly covered in solar panels. Astronauts have been seen lifting off wearing sleek white space suits while buckled up in front of touchscreen control panels inside the capsule.