While Japan's economy struggles with the economic fallout from the coronavirus pandemic, its stock market has staged big rallies since the start of November, with the key Nikkei index hitting new highs since the collapse of the bubble economy 29 years ago almost on a daily basis.

But while soaring stock prices in a recession are nothing new, the current overheated market does not reflect investors anticipating an economic recovery. Instead, it owes to central banks around the world implementing massive monetary easing and governments providing stimulus packages, such as handing out cash to households. 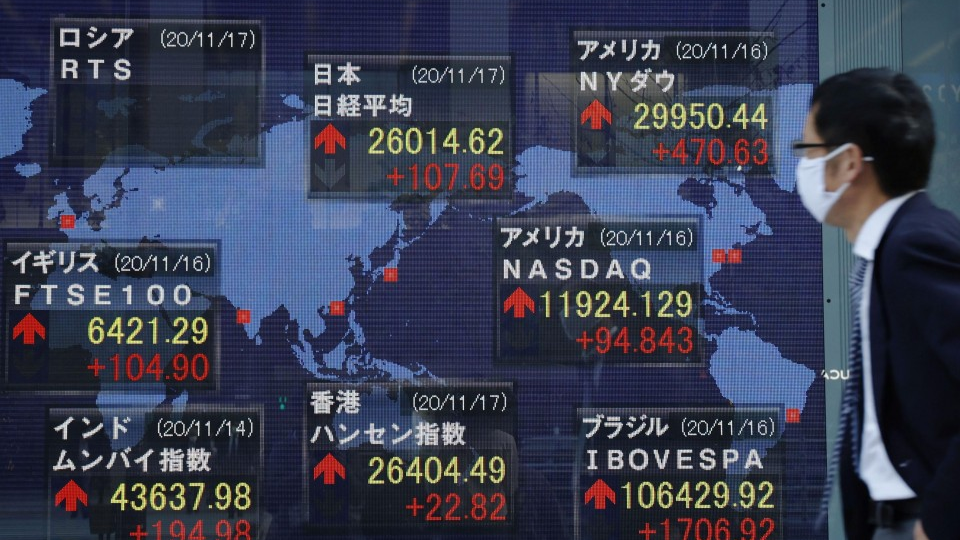 "Looking at statistics such as money stock, more money is circulating than actual economic activities due to (the government's fiscal) policies, and such money is flowing into stock and financial markets," said Koichi Fujishiro, senior economist at the Dai-ichi Life Research Institute.

The Bank of Japan is set to further prolong the duration of its ultraeasy monetary policy as it has failed to attain its 2 percent inflation target despite nearly eight years of unconventional easing policy under Governor Haruhiko Kuroda.

Overseas, the U.S. Federal Reserve has projected that it will keep interest rates near zero at least through 2023. The European Central Bank is also sticking with lower interest rates and is expected to provide more stimulus in December.

Central banks' easing programs entail buying massive amounts of government bonds or other investments from banks, pushing interest rates down. This lowers the returns investors and depositors can get on the safest investments, such as money market accounts and corporate bonds.

In search of bigger returns, market players have been forced into relatively riskier investments, such as stocks, which has pushed stock prices higher. Some individual investors have newly joined the stock market to put in their cash handouts.

The BOJ "injecting more and more money into the economy was the biggest mover behind the (Japanese) market rally although the global economy has yet to recover completely," said Norihiro Fujito, senior investment strategist at Mitsubishi UFJ Morgan Stanley Securities Co.

The Japanese central bank's purchases of exchange-traded funds have contributed to the recent rises as well, according to Seiichi Suzuki, chief equity market analyst at the Tokai Tokyo Research Institute.

Since 2010, the BOJ has invested in equities and is now a dominant market player. To stabilize financial markets amid the pandemic, it has expanded the program by increasing the buying to an annual pace of 12 trillion yen ($115 billion) from 6 trillion yen.

Suzuki said the main buyers so far this year have been the BOJ and companies that bought back their shares, with neither the central bank or the companies selling to take profits when stock prices rise. This has reduced the number of stocks circulating in the market and added to their values.

Dai-ichi Life Research Institute's Fujishiro, meanwhile, said that although share prices have been overly pushed up by the stimulus measures, the real economy is beginning to catch up with market as global business activities have resumed.

"More houses have been built, auto sales have become robust and exports and imports are increasing such as in China and the United States," Fujishiro said. "The Nikkei's upside will be the 26,000 mark and is expected to move around 24,000 for a while," he said.

On Nov. 11, the Japanese bellwether index closed above the psychologically important threshold of 25,000 for the first time since November 1991.