"A recognition that nuclear weapons are an absolute evil has spread in the world," Hiroshima Mayor Kazumi Matsui said at the outset of his meeting at the Foreign Ministry with Eiichiro Washio, senior vice foreign minister, also attended by Nagasaki Mayor Tomihisa Taue. 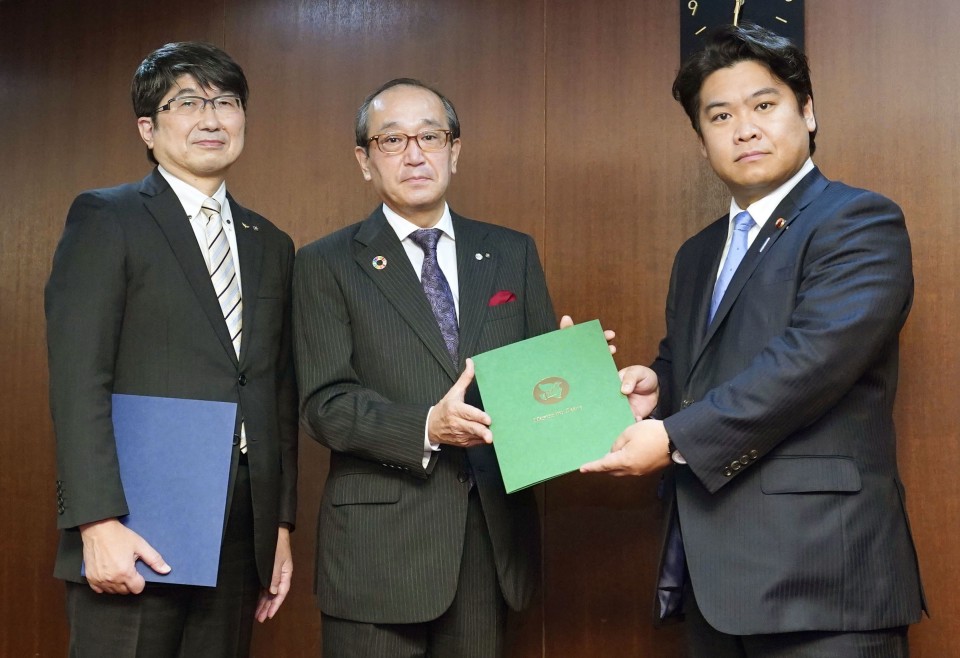 In the meeting, the mayors presented Washio with a letter addressed to Foreign Minister Toshimitsu Motegi, requesting the government to attend a meeting of the member states of the Treaty on the Prohibition of Nuclear Weapons as an observer if it cannot immediately sign the pact.

The letter called on the government to exert leadership in nuclear disarmament talks as the only country to have undergone nuclear attack.

"The hibakusha's strong appeal never to let anyone experience (atomic bombings) created a powerful movement. The treaty is a result of many countries sharing a sense of crisis regarding slow progress in nuclear disarmament talks," the letter read. Hibakusha refers to atomic bomb survivors.

The Japanese government says it shares the goal of the treaty but adopts a different approach toward the abolition of nuclear weapons, taking into account its reliance on the nuclear umbrella provided by the United States for its protection.

Washio reiterated the central government's position on the issue, the mayors told reporters after the meeting.

The mayors said they have also asked the central government to push for U.S. President-elect Joe Biden to visit their cities.

The United Nations said in October that Honduras had become the 50th signatory of the treaty, reaching the threshold required for it to be ratified and paving the way for it to enter into force on Jan. 22.

The pact, which will become the first international agreement outlawing the development, testing, possession and use of nuclear weapons, was adopted in 2017.

Some experts have questioned the effectiveness of the treaty as it does not involve any of the five permanent members of the U.N. Security Council -- Britain, China, France, Russia and the United States -- all of which are nuclear-weapon states.

Other nuclear weapon states -- India, Israel, Pakistan and North Korea -- are not party to the treaty, either.