Japan on Thursday logged a record 2,385 new coronavirus cases, marking fresh highs for the second consecutive day as the number of new cases in Tokyo also topped 500 for the first time since the pandemic began.

The capital confirmed 534 new cases, marking a record number of daily infections for the second straight day, and the metropolitan government raised its virus alert to the highest of four levels. The level four alert was last in place in the capital on Sept. 10.

In addition to Tokyo, seven other prefectures also saw record new cases on Thursday, with Osaka and Hokkaido reporting 338 and 266 new cases, respectively.

Daily coronavirus cases across the country surged to 2,203 on Wednesday, topping 2,000 for the first time.

The nationwide infection tally now stands at over 126,500, including about 700 from the Diamond Princess cruise ship quarantined in Yokohama in February, while 1,968 deaths have been reported.

Prime Minister Yoshihide Suga said Japan is on "maximum alert" and has called on people to do all they can to prevent infections.

He told reporters he wants people to wear face masks at restaurants as much as possible, taking them off only briefly to eat and drink, to reduce infection risk.

Suga also said he has instructed Yasutoshi Nishimura, the minister in charge of the government's coronavirus response, and health minister Norihisa Tamura to take additional measures to prevent the spread of the virus based on discussions at a two-day expert panel meeting through Friday.

The metropolitan government's highest level warns that infections are "spreading." But the alert system merely reflects the latest infection situation in the capital and has no binding force, including business closure restrictions.

In the week through Thursday, the capital's rolling average for the number of new daily infections reached a record 355.1, jumping from 169.3 as of Nov. 1 and exceeding the previous peak of 346.1 registered on Aug. 5.

"We have reached a phase of rapid spread," said Norio Omagari, director of the Disease Control and Prevention Center, at a press conference with Tokyo Gov. Yuriko Koike on Thursday. 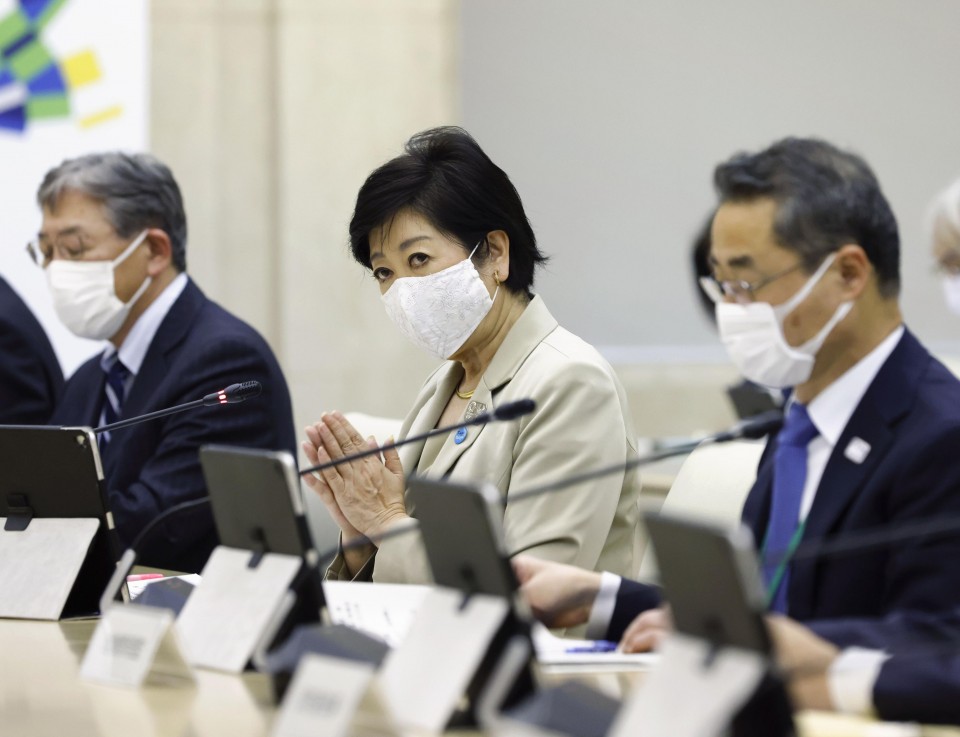 Tokyo Gov. Yuriko Koike (C) speaks at a meeting of a panel of experts tasked with monitoring the capital's coronavirus situation at the metropolitan government headquarters on Nov. 19, 2020. Tokyo's new coronavirus cases topped 500 the same day for the first time since the pandemic began. (Kyodo) ==Kyodo

When infections surged in nightlife districts in the summer, the Tokyo government asked restaurants to shorten business hours. But officials believe such a measure will provide little help this time as many cases have been found in a wider range of age groups and across broader areas.

Medical experts have described the resurgence as the third wave of infections, saying one of the major causes is the arrival of cooler temperatures and people spending more time indoors without enough ventilation.

They also said a domestic travel promotion initiative launched by the government was partly responsible for the resurgence of new cases. The travel campaign started in July initially without Tokyo, which joined in October after the pace of new cases slowed in the capital.

Toshio Nakagawa, head of the Japan Medical Association, said Wednesday there was no concrete evidence to indicate the "Go To Travel" subsidy program was responsible for the spike in cases, but noted, "There is no mistaking that it acted as a catalyst."

But Chief Cabinet Secretary Katsunobu Kato, the top government spokesman, said Thursday there is no change in the government's position that it will continue the travel initiative to help prop up local economies.

There has also been a rapid rise of cluster infections outside urban areas, such as on Hokkaido, a popular tourist destination known for its heavy snowfall. 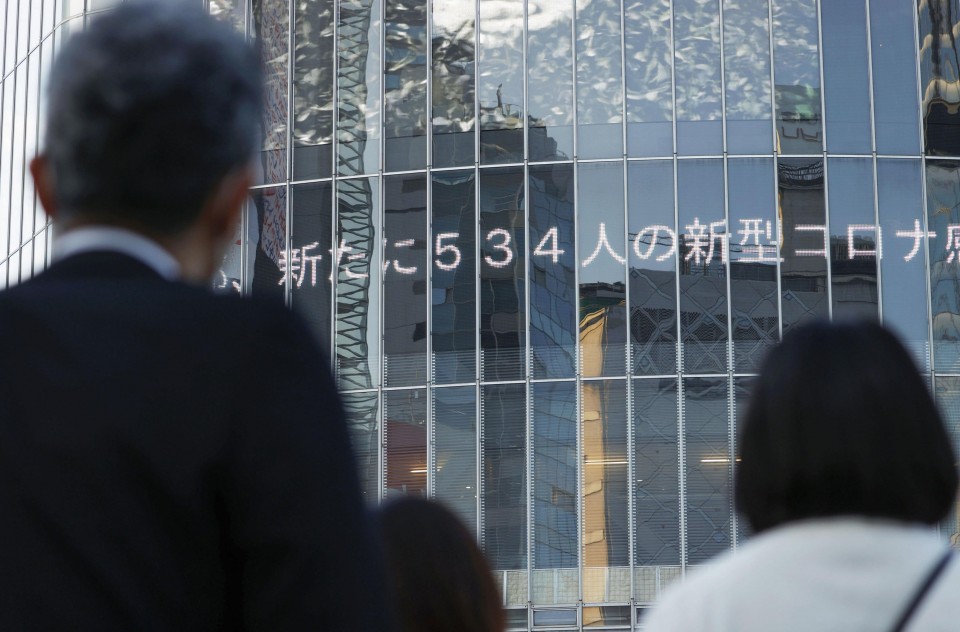 A large video screen in Tokyo's Shibuya area shows news of Tokyo confirming more than 500 new coronavirus cases on Nov. 19, 2020, for the first time since the pandemic began. (Kyodo) ==Kyodo

Japan's new coronavirus cases surge to record of over 2,200 cases

Pfizer to apply for U.S. authorization on COVID vaccine "within days"

Over 600 Japan entities hit by cyberattacks amid rise in telework