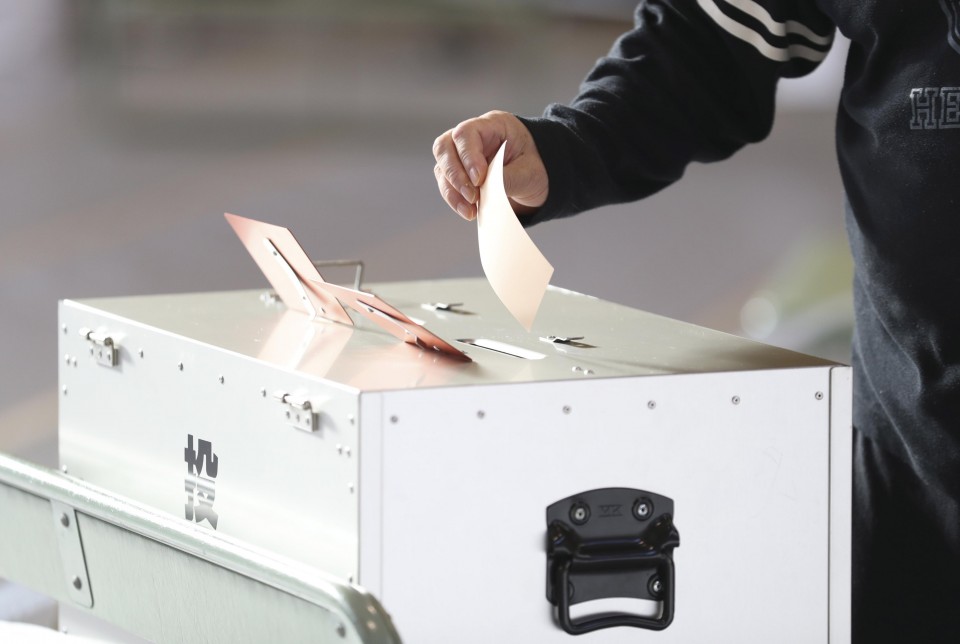 A person votes for a referendum on Osaka metropolis plan on Nov. 1, 2020. (Kyodo)

OSAKA - Voters once again opposed by a slim margin reorganizing Osaka city into a metropolis akin to Tokyo in a second referendum on the proposal Sunday, bringing uncertainty to local and national politics as it effectively ended the career of a key proponent.

The so-called Osaka metropolis plan, which was backed by Osaka Mayor Ichiro Matsui and Gov. Hirofumi Yoshimura, was aimed at correcting the overconcentration of population and power in Tokyo as the major western Japan city faces a shrinking economy.

"We have lost because I failed to (convince people). I will absolutely accept the will" of Osaka residents, Matsui said in a press conference late Sunday following the results in the binding referendum. The mayor said he would retire from politics after completing his term in April 2023.

A total of 692,996 voters turned down the metropolis plan in Osaka, which was supported by 675,829 voters, according to the local election board. In the 2015 poll, the plan was similarly rejected by a narrow margin.

Sunday's result now brings down the curtain on the plan, with Yoshimura saying he will no longer push it. Voter turnout stood at 62.35 percent, 4.48 percentage points lower than the previous referendum. 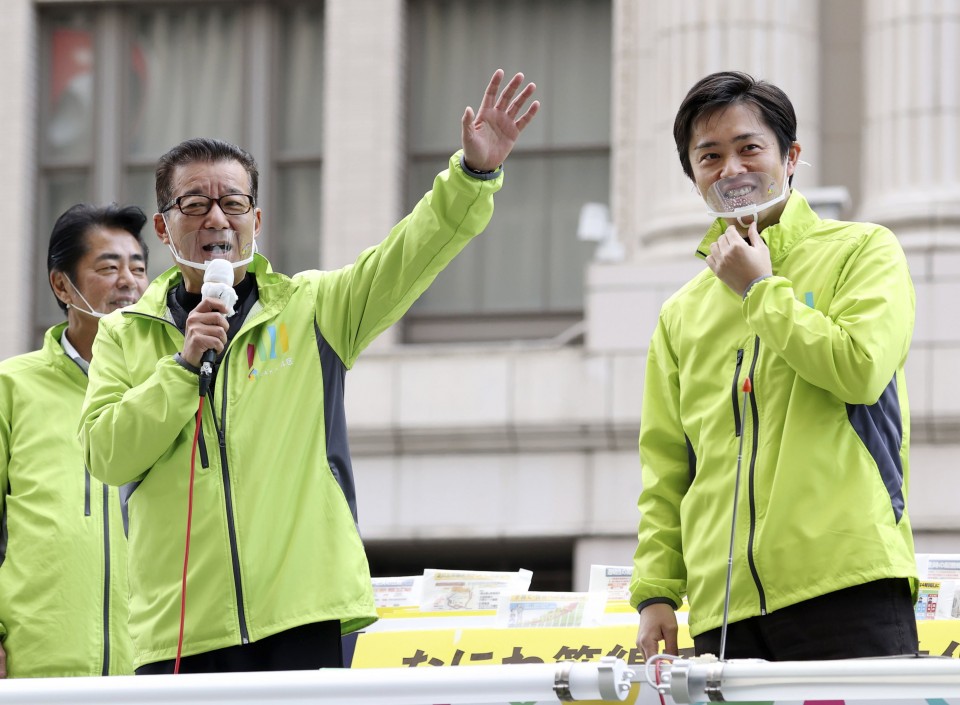 Osaka Mayor Ichiro Matsui (C), alongside Osaka Gov. Hirofumi Yoshimura (R), delivers a speech in Osaka on Nov. 1, 2020, as a referendum was held the same day on a plan to restructure the western Japan city's 24 administrative districts into four special wards with greater authority and elected leaders. (Kyodo) ==Kyodo

Matsui intends to step down as leader of the regional political group Osaka Ishin no Kai by the end of the month, with plans to hand the reins to acting leader Yoshimura, sources close to the matter said Monday.

While he will continue to head the Japan Innovation Party, a national political party, for the time being, his retirement deals a major blow not only to the two parties but also Prime Minister Yoshihide Suga, who enjoyed a close and personal relationship with him.

Suga had been using the Japan Innovation Party, which favors amending Japan's pacifist Constitution, to keep opposition parties fragmented, while adding pressure on Komeito, the junior coalition ally of the ruling Liberal Democratic Party, which has been backing the reform, according to LDP sources.

With the local LDP chapter opposing the metropolis plan, however, Suga had tried not to make his position known while his administration closely followed the course of the referendum.

Asked about the outcome, Suga declined to comment as a representative of the central government but said, "I think (the vote) stirred up debate on the metropolitan administration system."

"The people of Osaka must have agonized (in making a decision)," said Suga, noting how the plan was rejected for the second time by a slim margin.

"It is important to hold various discussions on how to revive the Japanese economy and revitalize local areas," he added.

Matsui on Monday again attempted to downplay talk he intended to move into national politics, saying, "I have not thought about it at all. I plan to complete the remaining two and half years of my term (as mayor)."

Yoshimura, a former lower house member, also told reporters the same day he would not be returning to state politics.

The Osaka metropolis plan was the signature policy of Osaka Ishin no Kai, which called for the restructuring of 24 administrative districts in the country's third-largest city with a population of 2.75 million into four special wards with greater authority and elected leaders.

Tokyo is arranged similarly with 23 special wards, which constitute Japan's largest city, followed by Yokohama. In other Japanese cities, wards do not elect leaders or assemblies, with elections held only at the citywide level.

If the plan had won approval, it would have been introduced in 2025, when Osaka hosts the World Exposition, and the special wards would have taken care of the provision of welfare, education and other basic services, while leaving wide-area services such as infrastructure to the prefectural government.

Proponents said the measure would lead to cost-effective governance by eliminating duplication of work by the Osaka prefectural and city governments. Toru Hashimoto, the founder of Osaka Ishin no Kai and a former governor and mayor of Osaka, first advocated the plan in 2010.

Opponents including the LDP's local chapter and the Japanese Communist Party, however, argued the coronavirus crisis should be prioritized over the referendum and that the plan would deliver a hit to the area's coffers, worsen services for residents and be an impediment to disaster-prevention efforts.

Komeito had opposed the plan in the previous poll but made an about-face and backed it this time, drawing concern over the lingering effect on political affairs at the national level.

With the current four-year term of lower house members expiring next October, some officials in Suga's LDP fear the result may hamper cooperation in the next general election between the LDP's Osaka chapter and Komeito, which were on opposite sides of the debate on the metropolis plan.

A senior LDP lawmaker dealing with electoral matters said, "We will have to work hard not to leave any emotional aftereffects" given the division in the ruling camps. 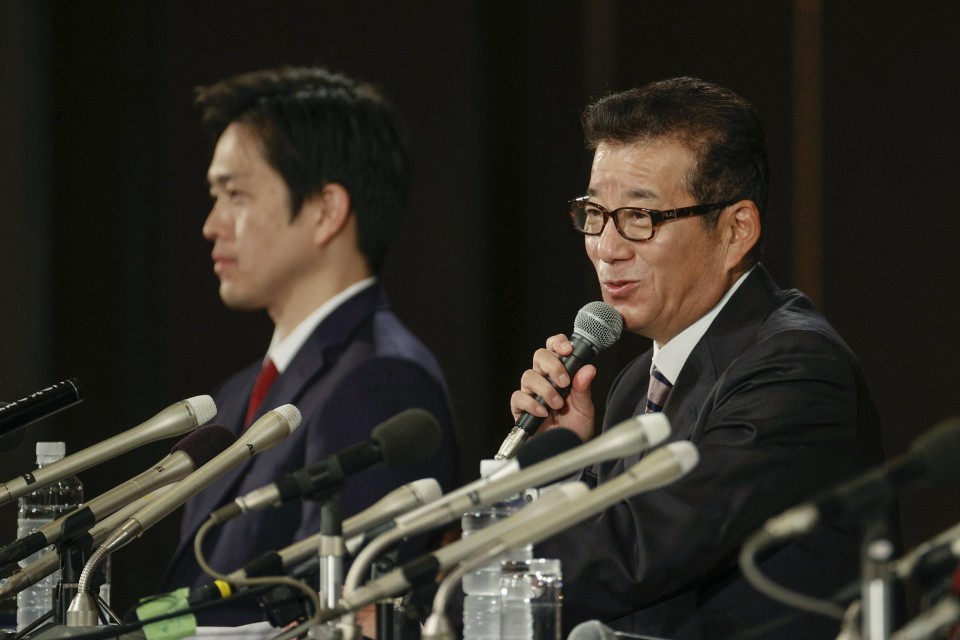 Osaka Mayor Ichiro Matsui (R), next to Osaka Gov. Hirofumi Yoshimura, speaks at a press conference in Osaka on Nov. 1, 2020, after the western Japan city's metropolis plan -- restructuring its 24 administrative districts into four special wards with greater authority and elected leaders -- was rejected by a slim margin in a second referendum. The two had pushed the plan. (Kyodo) ==Kyodo