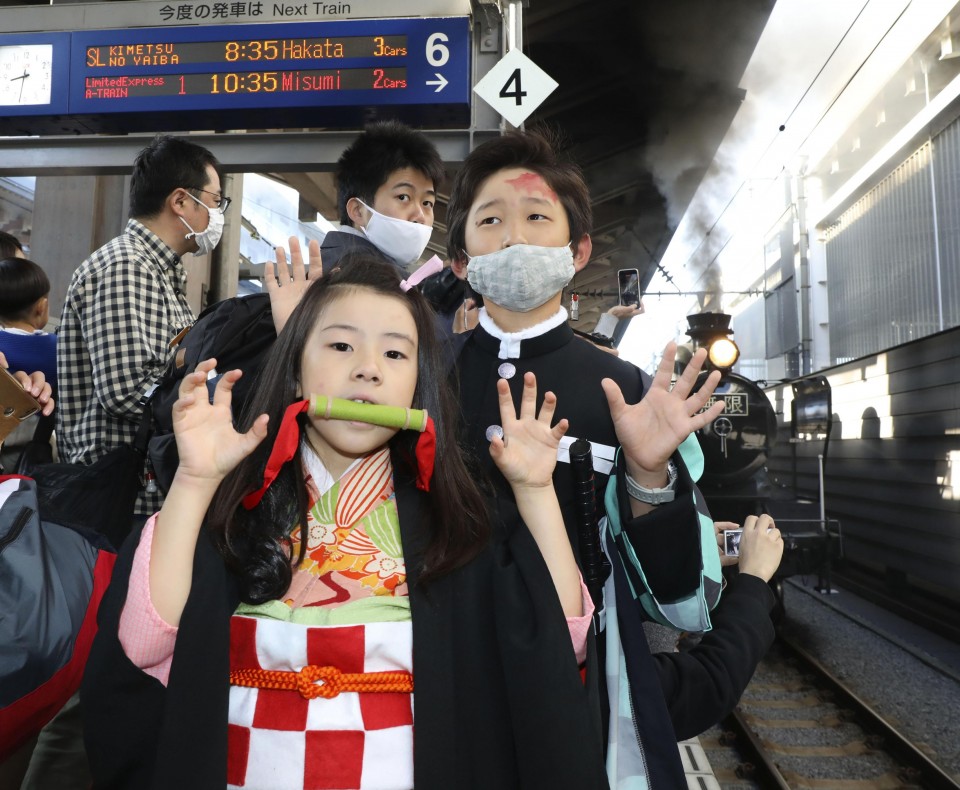 Children in costumes of "Demon Slayer" (Kimetsu no Yaiba) characters pose for a photo at JR Kumamoto Station on Nov. 1, 2020, as Kyushu Railway Co. begins operation of a special train featuring a movie of the popular Japanese manga series between Kumamoto and Hakata. (Kyodo) ==Kyodo

A steam locomotive inspired by the train featured in the animated movie of the popular "Demon Slayer" manga series began its first run Sunday in Japan's southwestern main island of Kyushu.

The train operated by Kyushu Railway Co., which will run for a limited time only from Kumamoto Station in Kumamoto Prefecture to Hakata Station in Fukuoka Prefecture, is a model from around 100 years ago -- the period in which the series and movie is set.

Titled "Demon Slayer -- Kimetsu no Yaiba -- The Movie: Mugen Train," the movie centers on the hero Tanjiro Kamado's efforts to save the lives of passengers aboard the "Mugen Train," named after the Japanese word for infinity, on which countless people have gone missing.

The steam-hauled sightseeing train SL Hitoyoshi, which has remained out of operation due to heavy rain in July, was used to replicate the train featured in the movie, with the characters for "mugen" embossed on its front carriage.

Original merchandise will be sold on board the train, with commemorative goods presented to passengers dressed up in traditional Japanese wear typical of the Taisho Era (1912-1926) in which the series is set.

Around 700 people flocked to see the train pull into Kumamoto Station on Sunday as it puffed out steam, with the sound of camera shutters filling the air. 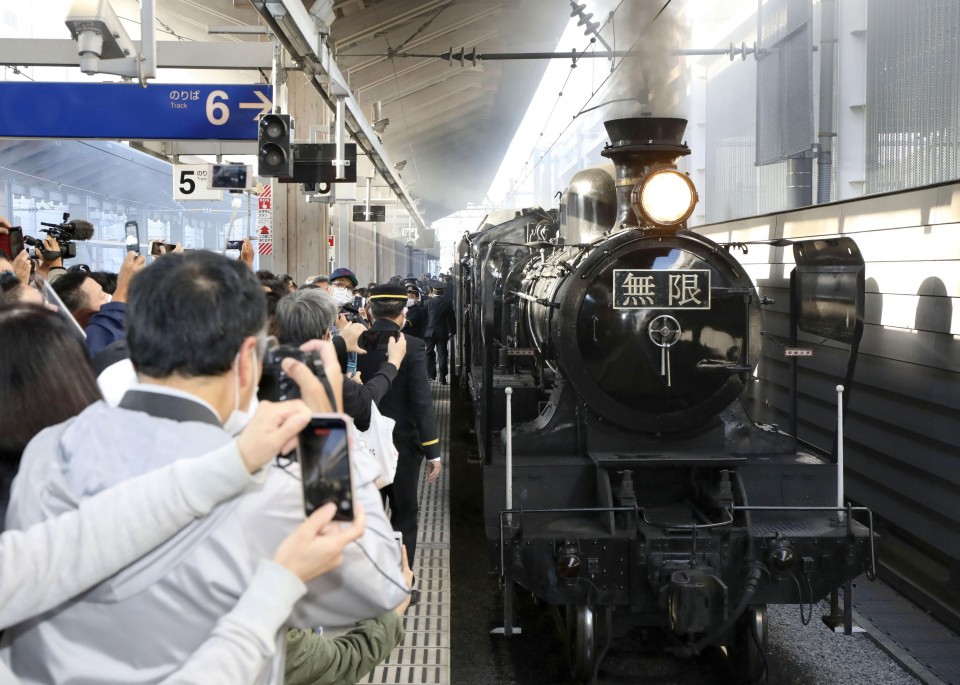 People take photos of a special train featuring a movie of the popular "Demon Slayer" (Kimetsu no Yaiba) Japanese manga series at JR Kumamoto Station on Nov. 1, 2020, as Kyushu Railway Co. begins operation of the train between Kumamoto and Hakata. (Kyodo) ==Kyodo

Kotaro Higashi, a 10-year-old elementary school pupil from Fukuoka city, and his 7-year-old sister Wakana came to see the train while cosplaying as characters from the series.

The special edition train will run a total of five times on weekends and holidays until Nov. 23, but all tickets have already been sold.

The popular series, based on a 2016 manga series by Koyoharu Gotoge, tells the tale of an adolescent boy fighting human-eating demons after his family is slaughtered and his younger sister Nezuko is turned into a demon.

The movie, which was released on Oct. 16, has broken box-office records in Japan as the first film ever to rake in over 10 billion yen ($95 million) within 10 days of opening, according to co-distributors Aniplex Inc. and Toho Co.

The manga was also made into an anime television series that aired in Japan last year.